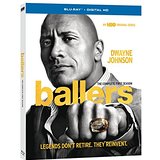 American football has been making the news of late, and not just in the sports pages. For the last couple of years there has been an increasing concern for players’ safety. From our president declaring he wouldn’t let his fictional son play the game to the hard-hitting Will Smith film Concussion, football has taken some heat over its violent nature. Players are retiring early, and the subject of life after football becomes more of a social question than ever before. That’s where HBO’s Ballers comes in. It’s a half-hour look at the NFL from the player perspective, both current and retired. It’s intended as a light bit of dramedy, and it certainly is that. Even so, the series doesn’t hide from some of the brutal realities of the sport, from the trappings of fame and fortune to the realities of its eventual end.

Meet Spencer Strasmore, played by Dwayne “The Rock” Johnson. Spencer was a star defensive player for the Miami Dolphins. In his retirement years he has joined a financial advisor firm, teaming up with buddy Joe, played by Rob Corddry. Together they are charged with getting their NFL buddies to sign up with the firm. What Spencer ends up being is a fixer to his former friends and clients, mostly trying to help them get out of their own way. All the while he’s haunted by a hard hit he delivered that ended the career of a Bills player years earlier. He’s still having flashbacks. He’s also concerned that he might have suffered head trauma in his years playing football. Finally through the pleas of girlfriend and sports journalist Tracy (Kebbel), he gets himself checked out. It’s all in a day’s work for Spencer.

The clients and friends, of course, provide much of the show’s humor and drama.  The best emotional beats can be found with Charles Greane, played by Omar Benson Miller. He’s a recently retired player with a new family. He’s trying to make it as a car salesman, but his heart is still in football. He’s the most innocent character in the series, and you can’t help rooting for the guy. To some he might be a boring character because there aren’t any hot chicks, drugs or ego drama. But he’s more like us than anyone on the show. He’s relatable.

There’s current superstar Vernon Littlefield (Carter). Spencer is working with an agent to get him a good contract, but his loyalty to his old friend Reggie (Brown) gets in the way. Reggie likes strutting around like a bigshot, and Vernon is his meal ticket. He feels threatened by anyone else’s influence. Ricky Jarret (Washington) has a secret mansion that’s his own fun world complete with hookers and drugs. You know that’s going to cause trouble. West Wing veterans Dule Hill and Richard Schiff play Dolphins GM and owner of the financial company respectively.

If you’re expecting a football show, you will be disappointed. There’s very little actual game material. The show uses the NFL’s public image to use the team logos and images without actual NFL approval. ESPN had a football show and did not use the official NFL symbols because of the money invested in broadcasting games. The NFL appears to be ignoring the use here. Johnson provides a rather endearing character in a pretty light atmosphere. It’s actually some of The Rock’s best stuff just because of the casual nature of the performance. There’s no macho or action stuff to live up to here, and it works in his favor. The background could be any kind of celebrity from actor to musician. The problems are pretty much generic fame kinds of things. But that might be a letdown if you’re hoping for football.

Each episode is presented in its original broadcast aspect ratio of 1.78:1. The 1080p image is arrived at with an AVC MPEG-4 codec. The Miami locations provide for a bright and colorful high-definition image presentation. You get plenty of detail because there are only five episodes per disc, so we get a nice healthy bit rate. The image is sharp and detailed. Character close-ups are pretty reference. Black levels don’t play into the image much. Textures are a little too smooth, but the image looks pretty good overall.

The DTS-HD Master Audio 5.1 isn’t there to impress anyone. The dialog is pretty much the focus here. Musical cues often come from source and sound dynamic enough.

I have to admit this was not what I expected. I’m a football fan and was hoping for more of that material. It’s summer, and fans like me are jonesing for the stuff right now. So I began a little disappointed. Eventually I started to dig the characters and started to enjoy the show a bit more. It’s junk food, to be sure, but there’s nothing wrong with that. It’s a quick 20 minutes at a pop, so the season runs pretty quickly. Is there any rewatchability here? “Depends on what brand of Tequila I drink.”

Gino Sassani is a member of the Southeastern Film Critic's Association (SEFCA). He is a film and television critic based in Tampa, Florida. He's also the Senior Editor here at Upcomingdiscs. Gino started reviewing films in the early 1990's as a segment of his local television show Focus. He's an award-winning recording artist for Omega Records. Gino is currently working on his 8th album Merchants & Mercenaries. Gino took over Upcomingdiscs Dec 1, 2008. He works out of a home theater he calls The Reel World. Favorite films: The Godfather, The Godfather Part II, The Body Snatcher (Val Lewton film with Karloff and Lugosi, not the pod people film), Unforgiven, Gladiator, The Lion King, Jaws, Son Of Frankenstein, The Good, The Bad And The Ugly, and Monsters, Inc.
The Funhouse Massacre Knight of Cups (Blu-ray)