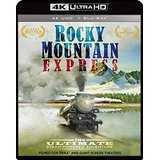 “They once roamed the earth by the tens of thousands. Their whistles spoke of distant places, of adventure and romance.”

No, we’re not talking about dinosaurs or some other extinct animal. Of course, we’re talking about the steam-engine train. I’m old enough to have ridden them myself. I had a grandfather who realized in the early 1970’s that these steam trains were about to disappear. He made it a point to explain this to me and made sure I appreciated my rides from Reading, Pennsylvania (literally a train city) to Philadelphia, where my Mom was sure he was a bagman for the mob and was using me as a cover. My grandfather wasn’t a bagman; we never visited any Don. We would explore the various wonders of America’s birth city. We’d visit the zoo or some historic site. Often we’d take in a Phillies game or hang out at the Italian markets in South Philly. I may not remember the details of everything we did. But I never did forget riding those steam-engine trains. And my grandfather was right. They’ve disappeared except for amusement parks and tourist attractions. But if you want to take a ride just like I did with my grandfather, all you have to do is pick up your ticket from Shout Factory and hop aboard The Rocky Mountain Express on UHD and in the dynamic color of 4K.

There are really two interchangeable things going on in this IMAX film. The narration tells us the story of William Cornelius Van Horn, who was given the task of creating a transcontinental railroad in order to unite the country of Canada. We get some detailed information on the unique topographical challenges that the railroad faced. There are tales of tragedy and tales of triumph. The end result is the Canadian Pacific Railroad, which still runs today from coast to coast over 3000 miles of changing landscape and the towering Rocky Mountains.

While the first function of the film is educational, the second part of is pure entertainment. We follow one of those trains in its journey across a continent. We get wonderful shots of the interior that are amazingly detailed thanks to the 4K images. But the real beauty shots have to be the incredibly breathtaking vistas through which our train travels. There are massive snow-capped mountains and rivers filled with mud or just crystal-clear, bright blue waters.

The Rocky Mountain Express is presented in an aspect ratio of 1.78:1. The 2160p Ultra high-definition image is arrived at by an HEVC codec. There’s a lot to love about the ultra-high-definition image presentation. The first thing you’ll notice is the incredible detail of the black levels. We get some beauty shots of an old engine, and there is wonderful detail found inside this black image. The colors and detail of the vistas will literally jump from the screen. It’s as if you’re looking out of the window on this amazing journey. The steam in the sky delivers textures that are as lifelike as it gets. The white billows of steam have a depth you may not even find in the best 3D presentation. The same applies to a particular shot of the Rocky Mountains taken just above the clouds so that the peaks dominate your image, while the fluffy clouds provide a floor from which these majestic peaks break through. The only flaw I found was the presence of some jitter on a couple of the tracking shots. This is the kind of stuff 4K was meant for.

The Dolby Atmos defaults to a fine 7.1 audio presentation. The surrounds are perfectly mixed so that you will feel yourself on this train from the first. Subs are particularly impressive. Shots of the powerful wheels on the rail deliver a thundering sense of motion. I haven’t felt this kind of depth in subs since Saving Private Ryan and the tanks rolling over the bridge. The narration is actually sparse, and it’s rather fitting, giving you a chance to really soak in the experience of the journey. When there is something to say, it comes through clearly. The score is also a minimalistic one. Again, I enjoyed the time spent just chugging along the tracks. It’s a truly immersive experience all the way.

There are two bonus features. Both are films produced by the Canadian government in the 1950’s. You also get a Blu-ray copy of the film & extras.

Romance Of Transportation In Canada (1952): (10:56) This is a rather silly animated short that explores the evolution of transportation in Canada. We start with canoes and end up with, of all things, a flying saucer.

Railroaders (1958): (21:20) This is a very worthwhile feature. It’s a black & white documentary that introduces you to folks who were working on the Canadian Pacific line at that time. We follow the actual people on their duties and get some interesting background on their lifestyle and their jobs. It’s a nice snapshot of a particular place and time that I really enjoyed.

If you’re a train enthusiast, you simply can’t afford to miss this one. It might just be your excuse for upgrading to UHD. For everyone else, this is more of an experience than a film. This is also the closest I’ve come to feeling like I’m watching an actual IMAX movie in my theatre. Recently, I’ve heard that IMAX is building $400,000 systems for rich folks who want to have IMAX in their homes. You can save yourself about $399,980 by picking this disc up. It’s good for at least “100 miles”.

Gino Sassani is a member of the Southeastern Film Critic's Association (SEFCA). He is a film and television critic based in Tampa, Florida. He's also the Senior Editor here at Upcomingdiscs. Gino started reviewing films in the early 1990's as a segment of his local television show Focus. He's an award-winning recording artist for Omega Records. Gino is currently working on his 8th album Merchants & Mercenaries. Gino took over Upcomingdiscs Dec 1, 2008. He works out of a home theater he calls The Reel World. Favorite films: The Godfather, The Godfather Part II, The Body Snatcher (Val Lewton film with Karloff and Lugosi, not the pod people film), Unforgiven, Gladiator, The Lion King, Jaws, Son Of Frankenstein, The Good, The Bad And The Ugly, and Monsters, Inc.
The Adderall Diaries (Blu-ray) Tuesday Round Up: July 12, 2016