Posted in: Disc Reviews by Gino Sassani on August 16th, 2016 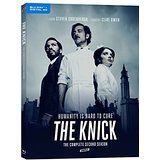 There has been no shortage of medical dramas dating back to the infancy of television. Many have become classics. Most have dealt with the use of modern (at least for that time) advances and cutting-edge science. That’s exactly what you get with The Knick. You get cutting-edge medical advancement… for 1902. The Knick is the fictional Knickerbocker hotel in 1900’s New York. The hospital exists in a poverty-stricken neighborhood where few of the patients can pay for their care. This has been a problem the board has been trying to turn around. Now ground is being broken on a new location in a much more affluent part of New York City. It’ll be an opportunity to finally turn a profit and also one of corruption for the man handling the new construction. But what of Dr. Thackery, played by Clive Owens?

We left Thackery in a rehab facility. While he is attempting to recover from his addiction, Dr. Algernon Edwards (Holland) is the acting chief of surgery. He hopes to make it permanent and continues to report pessimistically on Thackery’s recovery. But it’s going to be a struggle for a black doctor to be hired in such a position, particularly when the hospital is about to make its move in the hopes of attracting a more elite clientele. Edwards isn’t the only one with schemes. Dr. Everett Gallinger (Johnson) does not want to serve under a black boss. In fact, he’s joined a group of doctors who believe that “inferior” people should be sterilized in a twisted form of eugenics. His only hope is for Thackery to return, so he kidnaps him from the facility and keeps him on his sailboat, where he hopes to cure the addiction by making him focus on tying nautical knots. The process works so well that it pushes Thackery to change his thoughts on addiction and consider it a disease and dedicate his research to finding the cause and cure of addiction. This leads to all manner of brain experiments and a chance for the guys who do the incredible makeup effects to deliver the goods again. I even had a chance to talk with Justin Raleigh, who does many of these marvelous creations. You can check out that interview Here.

When Thackery returns, he is disappointed to find his best friend Bertie (Angerano) quits because of Thackery’s “bad” influence. But he finds that another hospital is more restrictive in allowing research and finally decides that Thackery’s methods give him the best chance to make discoveries.

Herman Barrow (Bobb) oversees the construction of the new hospital. We left him in serious debt to some dangerous folks last season. Now he’s found a way out with a little skim off the top of the hospital construction’s contracts. He constantly makes changes to the design, incurring more costs on which he takes 20%. It’s working so well that he buys the freedom of a prostitute he has fallen in love with. It puts him in the sights of the corrupt Tammany Hall, which was a corrupt political ring that served as “boss” in local politics. These Democrats were involved in everything from graft to “pay to play” politics.

Cornelia Robertson (Rylance) is another character with an impressive story arc. Last year she was investigating a typhoid epidemic. This year she discovers the health inspector who helped her has died, and the problems lead her back to her own family. That arc leads to a fiery confrontation towards the end of the season.

I have to warn you that this show is not for those with a weak stomach or a sensitivity to gore. While we might not have the likes of Freddy Krueger patrolling the halls of The Knick, there is a tremendous amount of gore. This is not like your typical network hospital show. The images take you ringside with these operations. You’ll be witness to every bloody detail for each of these procedures. For me it was more the use of needles. Strangely enough, they are not used much in the surgeries. The season ends with one of the most dramatic examples of this graphic surgery when Thackery actually decides to perform a surgery on himself.

That production detail extends to the hospital and the surrounding 1900 New York streets. The show does a remarkable job of bringing this era and location alive. It might be easier inside the hospital where it’s all about the set dressing. But in the world we are brought into a place where horses and carriages still prevailed. This is a place where electricity is just finding its way to common use. The telephone is a brand-new device that many people are not yet accustomed to using. This is a time when surgeons did not use gloves or masks. It’s a time cocaine was the most common way to relieve pain during and after surgery. It’s a time when a doctor believed pulling all of your teeth could cure and prevent insanity. Finally, it’s a time when cocaine addiction is treated with heroin.

Even with such production values and an incredibly realistic, if barbaric world, it’s the performances that make this show as good as it is. And nowhere is that more evident than with Clive Owens. He has completely morphed into the part both physically and emotionally. His portrayal of Thackery’s drive and addiction are almost too realistic. It’s a painful evolution to watch, but you honestly can’t look away. I do when the needles come out, but I look away reluctantly. Owens demands your attention for fear you’ll miss that subtle clue as to what is going on here. He’s supported by a very solid cast, but I sense that he brings everyone’s game higher with is own commitment to the part.

If the show has a flaw, it’s the sheer number of medical breakthroughs that just so happen to occur with these characters.  It makes for great drama, but there are times they take it a little too far. This season we see a character invent gasoline, which actually existed before this time. One of the most dramatic involves Thackery’s addiction. Because of his history he is required to be checked by Lucy for needle marks on a regular basis. Cocaine could be found pretty much in its liquid form in those days. He cooks the liquid and then powders the crystals and basically discovers snorting the drug. We have the first motorized ambulance. Thackery performs the first separation of co-joined twins.

The entire series is directed by Steven Soderbergh. His unique style and storytelling can be found in every frame of the series. A couple of years ago he announced he was stepping away from feature film for a while. Little did we know he’d find the perfect outlet for his creativity in television. It’s not surprising, however. More and more A-list actors and directors are finding that cable television offers them a world of opportunity you can’t find in a feature film. With production values measuring up to that standard and a long form to tell the story, shows like this are transforming the television landscape almost on a daily basis. This is another example of just how good television can be right now. It’s an exciting time for reviewers like me to get to binge-watch these things to deliver them up to entertainment fans like you.

Each episode is presented in its original aspect ratio of 1.78:1. The 1080p image is arrived at with an AVC MPEG-4 codec. The high-definition image presentation is a study in contrast and a series of exaggerated styles. Hospital scenes deliver an explosion of bright white lighting contrasted with the rather dull environments that remain poorly lit. Soderbergh has a habit of drawing out a particular single color in scenes. You’ll find his use of red here to be a perfect example of that style. It doesn’t matter if it’s blood or a costume; he pulls the color out of an otherwise drab color palette common to such a period piece. The episodes use darkness quite well. Black levels are outstanding and completely necessary. Much of the wonderful character moments are performed in shadows.

The DTS-HD Master Audio 5.1 is there to serve the dialog. This is not an explosive show in the sound department. Everything is quite contained and intimate, and that’s exactly what you’ll find in the audio presentation. The singular standout is a rather pulsing score that soon disappears into the background while still managing to hit the right emotional beats.

There are Audio Commentaries on select episodes.

Each episode has a 2-3 minute Post-Op feature.

Many have another short feature called Knicktoids or The Body Shop.

The Costume Shop: (5:42) Take a look at the costume designs.

Under Construction: (10:27)  Howard Cummings takes us on a tour of the sets.

Invitation To The Ball: (5:20) Another look at costumes for the fundraising ball the hospital throws.

Behind The Scenes: (10:02) It’s a five-part feature on the show’s social issues.

The only other issue I have with the series is how ambitious the stories tend to be. There’s so much they want to do in just 10 episodes that it all appears to run a little too fast. Often story threads don’t get the time or resolution they should have. I would love to see how much better the drama might be with a couple more episodes a season. That’s not going to happen, of course, so we’ll have to make do with what we have. It would be nice to linger just a little at times. I know that there’s a compelling story being told and that the show attempts to tell that story in a lean efficient manner. That’s all well and good. “Nothing saying you can’t have a little fun.”

Gino Sassani is a member of the Southeastern Film Critic's Association (SEFCA). He is a film and television critic based in Tampa, Florida. He's also the Senior Editor here at Upcomingdiscs. Gino started reviewing films in the early 1990's as a segment of his local television show Focus. He's an award-winning recording artist for Omega Records. Gino is currently working on his 8th album Merchants & Mercenaries. Gino took over Upcomingdiscs Dec 1, 2008. He works out of a home theater he calls The Reel World. Favorite films: The Godfather, The Godfather Part II, The Body Snatcher (Val Lewton film with Karloff and Lugosi, not the pod people film), Unforgiven, Gladiator, The Lion King, Jaws, Son Of Frankenstein, The Good, The Bad And The Ugly, and Monsters, Inc.
Jack Irish: The Movies (Blu-ray) Tuesday Round Up: August 16, 2016