Posted in: Disc Reviews by Gino Sassani on August 31st, 2016 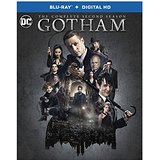 “The bad guys in this town are changing. They’re not playing by the old rules, or any rules. We need every measure at our disposal, and I’m not just talking more guns…”

The first season of Gotham was pretty much a straight criminal story told in a film noir environment where just a hint of the future comic book heroics is uncovered. The bad guys were pretty much standard mob guys. Were they eccentric? Yes. There were really no meta-humans or gadgets to speak of. This season we get a flood of the more familiar kinds of villains you know so well from this universe.

Gotham City. You know the name just as you know the names of Metropolis and Smallville. These are important places in the DC Comics universe that have existed as part of modern American mythology since the 1930’s. Warner Brothers has decided to tackle Gotham in much the way it spent 10 years bringing us to Smallville. But there is a decided difference to be found here. Smallville was indeed the origin story of Superman, and while the obvious answer might be that Gotham serves the same role for Batman, I found that to be a bit of an oversimplification. This is an origin story for the city of Gotham itself. Unlike many heroes, Batman was a product of his environment. This is the story of how one city devolved so badly that a hero like Batman was necessary. What we see taking shape here is a place where a certain Dark Knight can thrive and spread his wings.

That means the city itself is the most important character of the show. To make that effective over a season of stories, the city must be created with a kind of style and atmosphere that would set it apart. While there are certain aspects of this Gotham City that owe to Tim Burton’s style that set the mood for the first four films, there are also aspects of Nolan’s gritty city here as well. It’s at once familiar, but this is also unlike any city you’ve seen on television before. It exists out of place or time. There are cell phones, but not really computers. Detectives look through old newspaper stories on microfilm projectors. Some of us remember the days you had to do that at your local library. The cars are mostly from the 1970’s, while the building decor and costumes appear more at home in the 1940’s. It’s an industrial city, but one where whatever industry once thrived here has long gone away. For something conceived in the original four-color world of comic books, this is a dark and colorless place for the most part. The only thing that’s missing is the “abandon hope all ye who enter” sign at the city limits. This is film noir television like you haven’t seen it before. It’s all about shadow and light playing a game of cat and mouse in high-definition contrast.

Gordon, played by Ben McKenzie, is still the center of the story. In many ways Gordon’s story is straight out of Serpico. He knows that pretty much everyone is on the take, or at least willing to look the other way. His unwillingness to buy into the corrupt system has made him a target of Commissioner Loeb (Scolari). He’s been demoted to traffic cop and finally kicked off the force. The only way that Gordon can do good is to get his job back, and he compromises his integrity by going to Penguin (Taylor) to have Loeb removed. Harvey (Logue) is out of things. He’s tending bar and content to watch Gotham burn around him… that is until Gordon pulls him back in, in the wake of Penguin’s help. Gordon’s relationship with Leslie (Baccarin) is too much of a throwaway here. She’s pretty much nonexistent by season’s end. It’s a shame, because she’s an exceptional actress who isn’t getting much to sink her teeth into here.

“Bad things happen to bad people, and they happen all the time.”

The first half of the season is dubbed The Rise Of The Villains, and it is just that. The city is running completely crazy. Penguin is king of crime, but there are plenty of others on the rise. All of the bad ones we saw get put away last season have been released and mind-controlled to wreak chaos over the city as The Maniax. The killing and plunder is led by Jerome (Monaghan). He’s an early version of a Joker character. But his strings are being pulled by one of the season’s two big bads. That happens to be Theo Galavan, played by James Frain. He’s a really good bad guy here. He’s creating this crime wave in order to be elected Mayor. You see, the current mayor has been kidnapped by Galavan. It’s not just politics. He ends up framing Penguin for his crimes, which leads to quite an interesting fall and story for that character who goes through many changes this season. Galavan has an ages-old vendetta against the Wayne family. That means Bruce (Mazouz) has a new enemy. The plot includes ancient cult rites and ritualistic murders.

Galavan isn’t the only super-baddie of the season. B.D. Wong is no stranger to playing a psychologist on television. He spent a lot of years working with criminals in Law & Order. Looks like it rubbed off on him. Here he plays Hugo Strange, who is the head psychologist at the famous Arkam Asylum. He’s working for a secret council and is experimenting on the patients to literally create monsters that he unleashes on Gotham City. Now we’re getting into the not-so-normal kind of villains that require more than standard police procedural. One of these is the iconic Mr. Freeze.

This season also allows the character of Edward Nygma (Smith) to evolve closer to The Riddler we all know so well. He’s stooped to murder, and now he has to manipulate evidence to frame Gordon before the detective can catch him. This puts Gordon into a downward spiral that sees him in Iron Heights Prison. He also has a league of assassins trying to kill him. The truth is that McKenzie gets some very choice parts to play here. He is getting darker himself, and the conflict is quite wonderful to see McKenzie work with. At times it’s very hard to reconcile this character with the future version we already know. But I think that’s a very good thing, particularly if it means this kind of compelling performance.

Robin Lord Taylor continues to steal the show as Oswald Cobblepot, better known as Penguin. This character also goes through so many changes during the season. He starts as the city’s kingpin only to be framed for Galavan’s crimes. He struggles to even survive as he has to go on the run. Penguin spends time in Arkham under Hugo Strange’s power and actually changes into a “good” person for a time. That’s when Pee Wee Herman, Paul Reubens, enters the show as Penguin’s long-lost father. Suddenly he’s living with a “family” of cooks who just want Daddy dead to take over his estate. Penguin is getting in the way, and the result will bring our old friend back to the surface once again.

The second half is called The Wrath Of The Villains, and it’s going to get bloody and ugly. It’s strange bedfellows when the cops have to team up with Penguin to bring down Galavan, particularly after Galavan has some strange treatments: Hugo Strange, that is. It’s another season of delightful and compelling performances from Robin Lord Taylor.

With all of this evil on the rise Gotham City needs a new kind of hero, and it isn’t going to be Batman. Enter new Captain Nathanial Barnes. He’s a no-nonsense brute who plans on clearing out the corruption. When he tells Gordon to trust him because he knows how a cop can go down that hole, you better believe him. He knows. It’s The Shield’s master dirty cop, Michael Chiklis. He puts together a “strike” force to work the harder criminals. He has quite and up-and-down relationship with Gordon that is truly a highlight of the season. Honestly, I don’t believe that they made enough use of the great chemistry here. I would have gladly opted for much more.

I never thought that Batman without Batman could work. It does. Bruce Wayne and Alfred continue to have their story. This year we do get an iconic Batman moment when the two discover what will eventually become The Batcave. The relationship between the characters continues to develop and become more front and center. Unfortunately, it is overshadowed by too much wicked-cool stuff that I find myself least interested in… Batman. That’s gotta hurt.

There is a collection of shorts, often less than a minute that act pretty much as promo pieces or recaps.

Alfred – Batman’s Greatest Ally: (19:51) A look at the relationship between Bruce and Alfred.

Cold-Hearted – The Tale Of Victor Fries: (10:12) Has there been a Batman villain more anticipated than Mr. Freeze? It’s nice to see him added to the mix, and the feature is a profile to welcome him to the fold.

The show was developed by Bruno Heller, who last provided us with The Mentalist. Here he has managed to tap into the comic book world just enough that he teases us with things we know. You almost feel proud of yourself when you recognize elements that will play into the future of the Batman universe. It’s a smart approach that helps make the audience active participants in the show. There are so many little Easter eggs here that you have to stay on your toes. It also makes all of this very easy to watch again. There are bound to be things you missed the first time around. “Hang on to your hat, because you ain’t seen nothing yet.”

Gino Sassani is a member of the Southeastern Film Critic's Association (SEFCA). He is a film and television critic based in Tampa, Florida. He's also the Senior Editor here at Upcomingdiscs. Gino started reviewing films in the early 1990's as a segment of his local television show Focus. He's an award-winning recording artist for Omega Records. Gino is currently working on his 8th album Merchants & Mercenaries. Gino took over Upcomingdiscs Dec 1, 2008. He works out of a home theater he calls The Reel World. Favorite films: The Godfather, The Godfather Part II, The Body Snatcher (Val Lewton film with Karloff and Lugosi, not the pod people film), Unforgiven, Gladiator, The Lion King, Jaws, Son Of Frankenstein, The Good, The Bad And The Ugly, and Monsters, Inc.
Lucifer: The Complete First Season DC’s Legends of Tomorrow: Season 1 (Blu-ray)