Posted in: Disc Reviews by Gino Sassani on September 8th, 2016 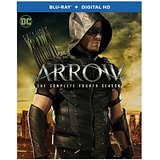 “Six months ago The Arrow died. But what he stood for didn’t. It lived on in the heroes who took up his mantle. People who believe that this city should never descend into hopelessness. Who believe although life is full of darkness, that darkness can be defeated by light. And tonight I am declaring my intention to fight with them for this city. To be a symbol of hope that The Arrow never was. I am the Green Arrow.”

The first three seasons of Arrow have to almost be considered one large origin story. Oliver Queen finally takes the name that he’s used in the comics for decades… The Green Arrow. Not to be confused with the same-colored Hornet or Lantern. Who the heck is this Green Arrow of whom you speak? If that’s your first question, you need to go back a couple of grades and catch up with the rest of us. The comics are good place to begin, but the television universe is its own place and not tied so tightly to the DC comic book universe. Your best place to go to catch up would be the first three seasons. It’ll be worth the effort, and I can get you started with those reviews found Here.

Oliver Queen (Amell) was in a bad place when last we left him. He had lost the trust of his team and particularly that of his closest confidant, Diggle (Ramsey). He’s become withdrawn and allowed the city to believe he was dead while his team fights the darkness without him. Diggle now wears a helmet and has become the field commander of the team. Thea Queen (Holland) is all decked out in the red archer duds of Speedy. She’s struggling to control the bloodlust she inherited from The Lazarus Pit. Laura Lance (Cassidy) has completely become Black Canary, and Felicity (Rickards) is secretly helping the team while living with Oliver. She’s also been running Palmer Tech since it is believed that Ray Palmer is dead. Of course, if you also watched DC Legends Of Tomorrow you know his destiny. They’ve got their work cut out for them. There is a new big bad in town who has an army of thugs they call Ghosts because they have stealth technology, and when cornered they take a poison capsule like the old Cold War spy days. Their leader is the powerful Damien Darhk, played phenomenally well by Neal McDonough. He wants to save the city by destroying it. If that sounds familiar, it should. It’s exactly what Oliver’s Mom and Malcolm Merlyn wanted to do with The Undertaking back in Season 1. Darhk’s first phase is through political reform. He targets for death all of the city’s leaders, and everyone who has dared run for mayor has been assassinated. Jeri Ryan even guest stars as a potential candidate that the team believes they can protect. Not so much.

With the impending release of the film version of Dr. Strange, the folks over at Marvel are about to introduce their universe to the presence of magic and the supernatural. DC has decided to take that step here with the fourth season of Arrow. Damien Darhk is a mystical person who has strong magical powers he gets from an ancient idol. We’ve already encountered some forms of mysticism from the League Of Assassins, but this season we go all out magic.

So just when he thought he was out, Oliver gets pulled back in with a new trendy costume and a more colorful name. He slowly earns the trust of Diggle, who has another outlet for his angst this season. One of Darhk’s ghosts is his brother Andy, whom he thought was long dead. When they capture Andy and try to remove Darhk’s influence, a lot of emotions surface for Diggle, and it’s a strong performance by David Ramsey who takes things up a notch, to be sure. He’s not the only one dealing with the return of a potentially dark version of a loved one. Thea and Laurel head to The Lazarus Pit to resurrect the long dead Sara Lance (Lotz). Even Malcolm warns against it, but you know how stubborn loved ones can be. It’s like a bad sequel to Stephen King’s Pet Sematary. You know, sometimes dead is better. In this case a pretty bad version of Sara emerges. And you know how much I hated the original one. It takes an appearance by Constantine (Ryan) to get her back to normal, where it’s just Lotz’s bad acting that we have to deal with.

The flashbacks take us back to the island but in a different situation. A shadow government organization kidnaps Oliver and dumps him back on the island where a drug lord named Baron Reiter has a poppy field operation complete with slave labor. But it’s not the drugs he was really sent to stop, nor was it to free the slaves. It’s a mystical idol that Reiter searches for that Oliver has been tasked to deal with. He just doesn’t know it until it’s pretty much too late. These flashbacks are becoming less informative and less interesting. They merely slow down the action and take us on a painfully slow reveal that isn’t all that surprising in the end. What are they going to do next season when the five-year flashbacks will be the first season of the series? The quality of this show is slipping. I’m hoping to see it return to the promise and execution of the first season.

Starling City is no longer Starling City. With the believed death of Ray Palmer and his dwarf star technology, the city has finally taken the name of Star City. Everything is now in place to be where Green Arrow fans are used to things being. Of course, characters are changed. Black Canary was originally a refugee from Earth 2, and Damien Darhk isn’t this magical guy. We accept the changes for the sake of a new medium and a chance to re-explore these characters and adventures. Damien Darhk is one of the best big bad villains to grace the show. It’s a wonderful acting performance, and it’s also a rather nicely played evolution of the series in general. He’s a much more rounded antagonist than Malcolm ever was or will be. Malcolm is still here along for the ride, but he changes sides faster than a tennis ball during a good volley. He’s become somewhat of a fan favorite, and he’s got a rather eccentric larger-than-life personality which is really just John Barrowman himself. I don’t think he’s acting much here. Not that I think he’s evil. I merely mean I think this character takes a lot of his personality directly from the man who plays him.

Production values are another place this series shines. They’ve done a tremendous job of creating an atmosphere that immerses you into this particular corner of the DC universe. The city is often rainy, and most of the action happens in the night. There’s a gritty underbelly to this place. The characters appear well-suited for their places here, and it doesn’t appear to be much of a surprise that bad guys feel at home here. It’s not quite the immersion you get over at Gotham, but it can be close.

Each episode is presented in its original aspect ratio of 1.78:1. The 1080p image is arrived at with an AVC MPEG-4 codec. Black levels are absolutely vital in this high-definition image presentation. So much of the action happens on rainy nights and in the shadows. Fortunately there’s solid shadow definition here, or this could well be a bloody mess to try to make out. When colors need to stand out, they do. Keep in mind it’s not really as colorful or bright a show as Smallville was. Look more for contrast and textures to replace shiny surfaces. There appears to be something going on with Oliver’s costume this season. They’ve added some kind of green glow in post-production that’s a little distracting, particularly when that aura includes something else in the vicinity of his chest. If it’s an experiment, you guys might want to rethink this one.

Smooth Criminal – The Damien Darhk Story: (14:37) A profile of the character both from the comics and the series.

While the big bad takes up most of the season’s story, there has been room to give the fans a few treats along the way. We get to see the return of Cupid and Vixen. We also get to see a version of Anarchy that’s pretty much created by Thea’s bloodlust. There’s a Civil War in the League Of Assassins. We get the cross-over with The Flash which I talked about in that review. It’s actually the back-door pilot for Legends Of Tomorrow, and you get both episodes in both releases. That’s a nice way to handle that kind of thing, and I know the fans appreciate it. A character dies, but that’s never for keeps in a show like this, so we’ll see. What’s next? “You’re about to find out.”

Gino Sassani is a member of the Southeastern Film Critic's Association (SEFCA). He is a film and television critic based in Tampa, Florida. He's also the Senior Editor here at Upcomingdiscs. Gino started reviewing films in the early 1990's as a segment of his local television show Focus. He's an award-winning recording artist for Omega Records. Gino is currently working on his 8th album Merchants & Mercenaries. Gino took over Upcomingdiscs Dec 1, 2008. He works out of a home theater he calls The Reel World. Favorite films: The Godfather, The Godfather Part II, The Body Snatcher (Val Lewton film with Karloff and Lugosi, not the pod people film), Unforgiven, Gladiator, The Lion King, Jaws, Son Of Frankenstein, The Good, The Bad And The Ugly, and Monsters, Inc.
Grey’s Anatomy: Season 12 High-Rise (Blu-ray)