Posted in: No Huddle by Gino Sassani on September 8th, 2016 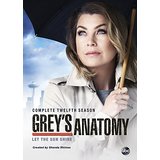 “When we strike that match, we like to think we can control the burn. We like to think we have any control at all. But fire is wildly difficult to contain. And just when you think you’ve extinguished the blaze… it reignites. It sucks in air, and it burns hotter and brighter than ever.”

Grey’s Anatomy has continued to surprise fans and critics alike. As far back as the seventh season there was strong talk that the show was drawing to an inevitable close. Since that time we have seen the end of the spinoff series Private Practice, which I always considered to be a better show. Nothing’s changed; as the show entered its 10th year there was the same talk both from outside and from within that the series was ending. Not only did it not end, but the show took some serious strides in ratings and storytelling. The 12th season sees another regular cast member gone with Patrick Dempsey leaving the series, but cast changes have been going on every year for this series. Last year it was Sandra Oh. Huge regulars have left or even been forced out. Over the years we saw huge names like Isaiah Washington, Kate Walsh, Katherine Heigl, T.R. Knight, Eric Dane and Chyler Leigh. You likely won’t miss him, and he still manages to dominate some of the stories this season.

If you want some history of the show, we’ve reviewed most of the eight seasons that have come before now. You can catch them here: Previous seasons. But this is not the kind of a show you can just start with on the 12th season and get much out of. If you’re not familiar with the cast and crew, start from season one and work your way up. This review just isn’t for you. Fans wanting to continue the ride…read on.

You get a big dose of Derek with the arrival of a new cast member. Samantha Sloyan joins the cast as both Callie’s new girlfriend and a new resident at the hospital. What Callie and the others don’t know at first is that Dr. Penny Blake is the surgeon who messed up and left Derek dead. It’s quite a blow when she arrives at a dinner party that Meredith is having. But Meredith isn’t the only one who has to face a new arrival that brings up past tragedy. Enter Dr. Nathan Riggs who has a violent history with Owen. They have a tragic story that plays out over the season with bits and pieces as the hostility grows. We learn Owen had a sister who is believed dead. Yes, I know exactly what you’re thinking. I’ve watched enough television to know she’s going to show up in a future season alive. There’s a reason why these shows make it a point to mention that they never found the body. This story is just beginning, trust me.

Amelia is also dealing with Derek’s ghost when she has to operate on a patient who was once his. It causes quite a crisis to her confidence, and that and her on again/off again relationship with Owen will drive her off the wagon once again.

There are plenty of changes and challenges to go around. Bailey finally makes Chief of Surgery and must learn how to deal with her new authority. That particularly comes into play when Ben makes a lot of mistakes this season that may have cost lives. He appears to have a bit of a hero complex, and it will cause more than a little conflict in their relationship even as the attempt to separate home and hospital in a church-and-state kind of arrangement. That doesn’t mean someone is going to be sleeping in the pews.

The show continues to attempt some new things. There is a particularly original episode that happens after Meredith is attacked by a deranged patient. For quite a while she cannot hear, and we see the hospital and its denizens through her silent world. Once her hearing is returned, her jaw is wired for a while so she can only communicate with a dry erase board. I actually could relate, as I spent six weeks having to communicate the same way. It’s not easy. My jaw wasn’t wired, so that actually made it harder, because it required discipline to stay quiet that long. Another unique episode happens backwards in time for the character of April, who must decide if she should sign divorce papers or not. At that point she lives her relationship with Jackson in reverse.

There’s a huge custody battle when Callie wants to move to New York with Penny and take their daughter with them. Arizona decides not to go down without a fight, and the show spends the better part of an episode in court. It’s one of the more emotional episodes, which might prove to the powers that be here that emotions come from more than the traditional bed-jumping that too often defines the series. I really won’t go into who is sleeping with whom here, as I don’t really have the space.

There are certainly a few episodes that have crazy or unique cases. One of my favorite involves a guitarist who is playing his guitar while Amelia roots around in his brain. Another involves a patient who has his entire hip covered with cancer. The doctors rebuild a different kind of bottom half for the guy where he has one leg in the middle of his body. Don’t ask me where the other important parts are; thankfully we were spared that kind of detail. I guess at least he can hop now. There’s also a triple organ transplant this season. One of the more black-comedy aspects of the season happens when Weber decides to teach the interns how to break the bad news of a death to a patient’s loved ones.

It appears it would not be a season of Grey’s Anatomy if a big regular were not leaving. That position falls to Sara Ramirez and her character Callie Torres. She’s off to New York and will not be a regular in Season 13.

Television shows love to end their seasons with weddings and births. This season Grey’s Anatomy attempts both. You get all 24 episodes, deleted scenes, and a gag reel. There’s more to come, and at least another season to air and finally make it to DVD. Don’t worry about me. “I’ll push through it.”

Gino Sassani is a member of the Southeastern Film Critic's Association (SEFCA). He is a film and television critic based in Tampa, Florida. He's also the Senior Editor here at Upcomingdiscs. Gino started reviewing films in the early 1990's as a segment of his local television show Focus. He's an award-winning recording artist for Omega Records. Gino is currently working on his 8th album Merchants & Mercenaries. Gino took over Upcomingdiscs Dec 1, 2008. He works out of a home theater he calls The Reel World. Favorite films: The Godfather, The Godfather Part II, The Body Snatcher (Val Lewton film with Karloff and Lugosi, not the pod people film), Unforgiven, Gladiator, The Lion King, Jaws, Son Of Frankenstein, The Good, The Bad And The Ugly, and Monsters, Inc.
Friday the 13th: The Series – The Complete Series Arrow: Season 4 (Blu-ray)