Posted in: Disc Reviews by Jeremy Butler on October 5th, 2016 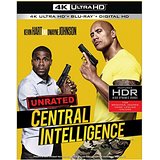 “Be the hero of your own story.”

Not the funniest addition to Kevin Hart’s reign as the king of comedy, but still a welcome sight. This time around, Hart teams with Dwayne “The Rock” Johnson for Central Intelligence. I’ve been anticipating this movie since behind-the-scenes footage leaked earlier this year, and the official trailer did nothing but fuel the flames of my excitement. After watching it, I can say that despite a few predictable plot twists, I still found the overall product to be extremely funny and worthwhile.

Calvin Joyner (Hart) was “the man” in high school. Both a jock and intellectually gifted (those two are usually mutually exclusive in these types of films), he is known by his fellow students as “The Golden Jet.” Robbie Wierdecht (Johnson) is the exact opposite, ridiculed by his fellow students due to his size and admittedly weird tendencies. During a school assembly, Robbie finds himself the butt of a terrible prank perpetrated by his classmate, and the only one to show him any kindness is the most popular boy in school (Calvin, in case you didn’t get that). An act that was never forgotten by Robbie. Fast forward twenty years. Calvin is stuck in a dead-end job and has been recently been passed over for a promotion, making it very clear to him that he peaked in high school.

Robbie, now known as Bob Stone, is a jet-setting, hard-hitting, fanny-pack-wearing secret agent for the Central Intelligence Agency who finds himself framed for the theft of government secrets and the death of his partner (Aaron Paul). Now being hunted by his own agency, Bob recruits the one person he trusts for help and intends to get it whether Calvin likes it or not.

As mentioned earlier, this was not the funniest film that I have seen by Kevin Hart, but it is also far from the worst. There are the obvious pitfalls such as that it is a superficial comedy lacking in depth and substance. That said, when you laugh, it will be genuine, and it will be constant. A buddy cop story without the cop portion, the duo plays well off one another, even though at times despite the considerable size difference Hart appears to be the more masculine of the two, which is a great play on the obvious difference between the two leads. That is not to say that when Mr. Johnson does lay the smackdown that he doesn’t do it in the fashion Rock fans are accustomed to. I will say that I thought there would be more action and more bullets flying. Given the action-star reputation that Johnson has acquired in recent years, Central Intelligence is actually pretty tame in comparison. Also, I would have enjoyed the addition of a bit more espionage work, perhaps the addition of an unrelated international mission (as we all know the CIA is not supposed to operate domestically) carried out by the Bob character to give an understanding of his proficiency as a CIA operative.

What it is missing in action it makes up for in jokes. Big laughs during several rants from the standup comedian, especially in regard to the need to or no need to conduct a bowel movement. Johnson, however, holds his own as well in his badass albeit socially awkward role. Both give decent independent performances, but their true strength definitely lies in their collaborative efforts. You need only observe the therapy session to know that I am right. There is also a surprise cameo that I am sure the entire audience will enjoy.

Central Intelligence is presented in its original aspect ratio of 2.40:1. The ultra-high-definition image is arrived at by an HEVC codec. The ultra-high-definition presentation makes a very good point in the adoption debate. There has to come a time when films that aren’t otherworldly in their f/x and visuals also find a home in the 4K format. It’s true that there aren’t any mind-bending images in this film. It operates pretty much in the real world. There’s still a lot to love here. 4K adds depth to the image even without f/x. That’s going to immerse you into this world just as it would another planet. Colors are vivid and sharp, but kudos to the folks who created this 4K master. There is none of the tempting oversaturation of colors. Instead you get a clear and textured image that allows you to see details you could not in 1080. Black levels are another place 4K can take a quantum leap from what you are used to. You get absolute pitch blacks and fine shadow definition. A black helicopter at night allows you to see the detail nicely. Close-ups take you where no format has gone before. With a comedy you get to see nuances of those comedic faces. Kevin Hart is particularly helped by the increase in sharpness and detail.

There’s no Atmos here or 7.1. You get a pretty much standard DTS HD-MA 5.1 track here, and it’s all going to be fine. Let’s be honest here. Dialog is going to come through just fine, and that’s the focus of the audio presentation. The 5.1 surrounds deliver enough of the ambient stuff that we can remain immersed in the action. There’s some nice surrounds in the plane and during the gunfights. The score doesn’t intrude much and might be the one thing that would have benefited from a wider presentation. The subs are average. You get the explosive response you’re looking for out of the shootouts.

The extras are on the provided Blu-ray copy. The extended version is an option on either disc. Not really much new information, just unrated. That means more language, really.

The Blu-ray has the same extras but a rated and unrated version. The only place that is significant is the Deleted Material.

Deleted/Extended Scenes: Rated: (18:07) There are 11 with no individual-play option. Unrated: (1:09:51) Tons more material here clocking in at over an hour. There are 19 scenes here. Mostly extended or alternate scenes.

The rest of these are pretty much the same except the unrated version doesn’t have beeps for the curse words.

Dance-Off: (2:25) Here we see the kid who played young Robbie, and there’s a demonstration of his CG face replacement. He and The Rock had a dance-off while shooting the reunion party scene.

Couch Time Lapse: (:40) We see the crew doing the cleanup of the living room where The Rock made a mess only to clean it when the FBI shows up.

In conclusion, die-hard Kevin Hart and Dwayne Johnson fans have nothing to worry about, as Central Intelligence is not likely to disappoint. Also, be sure to stay for the end-credit gag reel, as it is not to be missed in my opinion.

Jeremy Butler is a film school graduate of the International Academy of Design and Technology. He is been writing for Upcomingdiscs since 2012; however, movies have played a big part of his life for much longer. Favorite genres include horror, science fiction/fantasy, and comedy. Favorite movies are V for Vendetta, Boondocks Saints, Kiss Kiss Bang Bang, and The Godfather.
Hawaii Five-O (2010): The Sixth Season “31 Nights Of Terror” Contest – Win A Copy Of Vampyres On DVD From Artsploitation Films