Posted in: Disc Reviews by Gino Sassani on October 13th, 2016 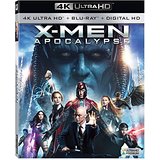 “Everything they’ve built will fall! And from the ashes of their world, we’ll build a better one!”

Since Disney has taken over The Bullpen at Marvel, they have had an unprecedented run of successful comic book superhero films. During that same time DC/Warner has had trouble finding a direction for their cinematic universe. But the Marvel titles still in the hands of other studios haven’t shared in that run of good fortune. Sony finally had to relinquish control of Spider-Man, and Fox has followed disaster with disaster with The Fantastic Four. The single exception to that rule has been the Fox handling of The X-Men universe. Since Bryan Singer’s 2000 hit the series has had some ups and downs, but the box office verdict has generally been good. Since the series was revived with prequels in 2011, we’ve enjoyed two solid X-Men films sporting a younger cast. Spinoffs with Wolverine and Deadpool have added to the Fox/Marvel winning combination. But it seems the X-Men can fight end-of-the-world events but can’t seem to quite get the hang of third movies in trilogies.

X-Men Apocalypse comes off of perhaps the best film in the franchise, X-Men Days Of Future Past. Perhaps that film provided expectations that were too difficult to overcome. Perhaps we’re all suffering from a slight case of comic book fatigue. Each of those theories might explain why this one didn’t quite seem to offer me much satisfaction. But I have to consider another possibility: X-Men: Apocalypse just isn’t that good a movie.

In the 1980’s Professor X (McAvoy) has finally opened his School for Gifted Children, where we get introduced to younger versions of our favorite X-Men who haven’t quite made it to the prequels yet. Future couple Scott Summers/ Cyclops (Sheridan) and Jean Grey (Turner) are now at the school. Meanwhile Moira McTaggert (Byrne) is getting in over her head in Egypt. She’s about to awaken the man considered by many to be the first mutant. Apocalypse (Isaac) is also one of the strongest mutants ever. Throughout ancient history he has attempted to conquer the human population to make the Earth a haven for mutants. He has absorbed the powers of the hundreds of mutants he has encountered over the centuries, and he finds the modern world ripe for conquest. Of course, his mutant-first ideology is no stretch for Magneto (Fassbender), who has seen his own life go south once again. He also pulls together a young Storm (Shipp), a young Angel (Hardy), and new character Psylocke (Munn). These serve as his traditional Four Horsemen, keeping with the whole Apocalypse theme. The result is some mutant battles and a final showdown of mental power between Professor X and Apocalypse.

Of course, we’re treated to a ton of computer-generated marvels once again. The battles fall short of anything I’ve encountered in recent years. But that’s not true of all of the epic set pieces. There are several that appear to be a bit weak. Perhaps it’s the sheer amount of f/x we get anymore, but there are many times, particularly with Apocalypse, that the world doesn’t quite feel real. Can’t say there are any obvious flaws here, just that you might not find some scenes up to snuff, so to speak. It’s an ambitious film visually. Of course, these films all are. There’s so much of it in which I don’t feel the character moments this time, so they don’t appear to be inhabiting the kind of real world I’m getting too used to seeing.

The film fails to mine the two best elements of the first two films. Each of the previous movies took place in a different decade. First Class was in the 1960’s, while Days of Future Past spent most of its time in the 1970’s. Both films made wonderful use of their decades. They did a pretty cool job of bringing the iconic images, sounds, and events of those periods into the very production value itself. Apocalypse does little to take advantage of the 1980’s; in fact, this script doesn’t even try. It could have been any time, and the series gives up a significant amount of its charm and unique landscape. In a year of so many comic book films, that difference would have gone a long way to solving the fatigue problem. The franchise has always provided a stark platform to talk about prejudice and even genocide, but except for a few token lines given to Magneto, that path has been abandoned here. In its place is a bit of a shift in the moral high ground.

Perhaps it doesn’t help that the big bad here is an immortal god-like being. Oscar Isaac is under too much makeup that doesn’t lend itself to nuanced acting or emotional beats. It doesn’t help that his lines are rather stiff and cliché. He’s capable of being a far more powerful force here, but he’s never allowed to engage the character in any meaningful way. All-powerful foes need that kind of strength of character to escape the trap of quickly being uninteresting. It’s something Marvel managed to do with Loki through both good writing and casting the kind of actor we got in Tom Hiddleson, who was allowed to truly embrace the nuance of his character. Apocalypse is reduced to an inorganic threat that can only be overcome through luck and cinematic trickery. I’m willing to go pretty far in my suspension of belief, but I never could wrap my head around this character to make him come alive for me in any way.

To make matters worse, Magneto is reduced to a nearly impotent henchman, which doesn’t do justice to the character or actor Michael Fassbender. He’s phoning this one in, and that kind of pathogen is contagious. This is the last film in the cast members’ contracts, and they appear to be playing it out this time. Not to mention the new characters. We finally see a young Storm, but somehow she’s nothing like the character cinematic audiences have come to expect. To be fair, this is closer to the comic origins, but I fear it’s too late for that. I’ve always been a fan of Psylocke, but she’s also watered down here. All of this buildup for such little actual development of the character. Olivia Munn had the right look, but she doesn’t jump off the page here. Kodi Smit-McPhee can’t hold a candle to the version we already had of Nightcrawler. Again there is a closeness to the original material, but this cinematic universe has been established already. Quicksilver once again gets the most entertaining scene in the film in an almost direct nod to his Days of Future Past romp. Fun, to be sure, but is it worth wading through the rest of this mess? Not really.

X-Men: Apocalypse is presented in its original aspect ratio of 2.40:1. The Ultra high-definition  image is arrived at by an HEVC codec. This is a wonderful improvement over the First Class 4K presentation. Colors are spot-on this time with perfect saturation levels. This is turning into the real big point on UHD releases. I’m already getting tired of having to adjust saturation for each disc. You won’t have to do that here. Colors pop just the way they were intended. Detail is so good that the release might be too sharp. The CG work on this film was below par for these efforts. They look rather artificial under this kind of razor-sharp scrutiny. Black levels are magnificent and offer countless layers of shadow definition.

The Dolby Atmos presentation defaults to a nice 7.1 track. Finally Fox has figured out that this is the standard on a UHD release. The surrounds do a terrific job of placing us right in the middle of all this fury. The score bites through with some nice emotional swells. Your subs are going to make themselves known almost non-stop. Dialog cuts through perfectly even when the rage is full-on. It’s easy to get lost and swept away with this kind of audio presentation.

There’s plenty of action here, but even the characters in the film joke about the third film always being the worst. That was certainly true of the first X-Men trilogy and is true here as well. When I saw it for the first time in the theater the film started to fade almost as soon as I left the screening. Perhaps… “…it was just a dream.”

Gino Sassani is a member of the Southeastern Film Critic's Association (SEFCA). He is a film and television critic based in Tampa, Florida. He's also the Senior Editor here at Upcomingdiscs. Gino started reviewing films in the early 1990's as a segment of his local television show Focus. He's an award-winning recording artist for Omega Records. Gino is currently working on his 8th album Merchants & Mercenaries. Gino took over Upcomingdiscs Dec 1, 2008. He works out of a home theater he calls The Reel World. Favorite films: The Godfather, The Godfather Part II, The Body Snatcher (Val Lewton film with Karloff and Lugosi, not the pod people film), Unforgiven, Gladiator, The Lion King, Jaws, Son Of Frankenstein, The Good, The Bad And The Ugly, and Monsters, Inc.
“31 Nights Of Terror” Satanic (Blu-ray) The Last King (Blu-ray)