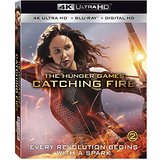 “In penance for their uprising each district shall offer up a male and female between the ages of 12 and 18 at a public reaping. These tributes shall be delivered to the custody of the Capitol and then transferred to a public arena where they will fight to the death, until a lone victor remains. Henceforth and forevermore this pageant shall be known as The Hunger Games.”

Now that all four films are out on UHD Blu-ray in glorious 4K, we have the opportunity to view them all again from the very beginning. It’s easier to catch the subtle nuances that were planted in the earlier films that would pay off over the four-film run. It took us four years to do that originally. Now you can do it in a day. John Ceballos takes us on the next part of that journey with The Hunger Games: Catching Fire (2013).

The most peculiar thing about The Hunger Games — both in the books and the blockbuster movie adaptations — is that the Games themselves are easily the least interesting part. The first film’s staggering box office success predictably led to a much bigger budget for the rabidly-anticipated sequel. (Catching Fire cost a reported $140 million, which is nearly double the original’s $78 million budget.) The extra money is on display in almost every engrossing frame, including the action-packed arena scenes filmed in Hawaii. But the real reason Catching Fire is an improvement over its predecessor is because the story’s satirical, political, rebellious spirit has been placed front and center.

We catch up with scrappy heroine Katniss Everdeen (Jennifer Lawrence) a few hours before she is set to depart for her mandatory Victory Tour with Peeta Mellark (Josh Hutcherson). Katniss and Peeta bucked the system by becoming the first co-winners of the previous Hunger Games, the annual televised battle to the death meant to assert the oppressive Capitol’s control over the entire nation of Panem. They survived largely by fabricating a love story that nobody bothered to tell Peeta was fabricated. Their showmance captured the nation’s heart, but it irked Gale (Liam Hemsworth) — Katniss’s formerly platonic hunting buddy — and the sinister President Snow (Donald Sutherland).

As Katniss and Peeta begin the Victory Tour, along with their consistently soused mentor Haymitch (Woody Harrelson) and funny, fussy escort Effie Trinket (Elizabeth Banks), they begin to understand why President Snow was so miffed. There are signs of rebellion throughout the 12 districts that surround the Capitol from people who viewed Katniss and Peeta’s dual win as an act of defiance. President Snow, with counsel from new Head Gamemaker Plutarch Heavensbee (Phillip Seymour Hoffman), begins to violently crack down on the surrounding districts before coming up with an evil stroke of genius for the upcoming 75th Hunger Games, also known as the Quarter Quell: the participants for the next Games will be selected from the existing pool of winners. That’s right…the 75th Hunger Games is basically Survivor: All Stars, except with actual backstabbing.

Each of the 12 districts is required to send a male and female tribute, and since Katniss is the only female District 12 tribute to ever win The Hunger Games, she’s forced back in the arena. The ludicrous inevitability of the moment — which has Effie drawing Katniss’s name out of a giant glass bowl that only has one strip of paper with Katniss’s name on it — doesn’t make it any less of an emotional gut-punch thanks to a thoughtful, biting script by Simon Beaufoy and Michael Arndt. Although Hunger Games author Suzanne Collins was one of the credited screenwriters on the first film — along with director Gary Ross and Billy Ray — I dare say the sequel is more successful in dramatizing the themes in Collins’ novel.

Catching Fire immediately establishes Katniss as a traumatized heroine who is paying an emotional price for her survival. This is worth mentioning because the film spends an inordinate amount of time exploring the difference between the way “stars” are presented to the public and the way they really are. Everything about the way Katniss is packaged — and, by extension, the way Jennifer Lawrence glowers from movie posters as she readies an arrow and takes aim at reluctant male moviegoers who may not be in a hurry to see a YA movie adaptation starring a girl — screams “badass action heroine.” But there’s obviously more than meets the eye.

When director Francis Lawrence (I Am Legend) took over for Ross, movie fans probably expected more spectacle in the form of bigger, badder action sequences. Lawrence, however, is a gifted visual storyteller in every sense — check out the nearly silent, apocalyptic first portion of I Am Legend —and the spectacle he delivers here extends to vividly realizing the monochromatic District 12 as well as the ridiculously opulent Capitol and its citizens. (I believe Effie wears a dress made entirely of butterflies at one point.) The director also makes sure there’s enough time for the movie to make points about misguided idolatry (Katniss physically recoils when a little girl tells her she wants to grow up and kick butt in the arena like her) and the things people do (like become too wrapped up in a contrived, televised death match) so they can avoid thinking about society’s real problems.

Though Ross did a fine job of kickstarting the franchise, the very best thing he did was cast Jennifer Lawrence as Katniss. Beyond Lawrence’s considerable talent (the actress can credibly go toe-to-toe with an imposing veteran like Sutherland without blinking), it’s a perfect match between star and role. In real life, Lawrence seems every bit as charmingly awkward with superstardom (Oscar fall!) as Katniss. Hutcherson, who I thought was too much of a bland nice guy the first time around, is allowed to show more of Peeta’s wounded charm. Hemsworth, on the other hand, is still essentially a handsome human standee, but at least the character gets to show some rebellious fire this time around. On the surface, their relationship closely resembles those typical YA love triangles, but the gravity of everything else that’s going on in the Hunger Games universe simultaneously makes those sort of love triangles seem a bit stupid and inconsequential.

The impressive supporting cast from the first film is joined by some new faces. The amusingly cranky Harrelson is once again locked in a tight competition with Banks (who impressively emotes through heavy makeup) and Stanley Tucci (with blindingly white teeth as TV host Caeser Flickerman) to see who has the most ridiculous wig. (I’m still putting my money on Harrelson for his floppy, unnecessary hair piece.) The most noteworthy newbie is Oscar winner Hoffman as the inscrutable new Gamemaker. It’s a deadpan performance that makes his character hard to read, and he shares some strong scenes with Sutherland. (The movies have ditched Katniss’s first-person perspective from the books, so we get to sit in on President Snow and Plutarch’s menacing meetings.) We also get to know more of the other tributes, including Jeffrey Wright as tech-savvy, quietly confident Beetee, Sam Claflin as preening charmer Finnick Odair, and Jena Malone as the aggressive, unhinged Johanna Mason. Finnick and (especially) Johanna each get memorable introductions, and both actors thankfully get more than one dimension to play.

Once the story moves to the impressive arena set, the film loses a good amount of the spark that separates The Hunger Games saga from your typical blockbuster. The bad CGI in Catching Fire (baboons! poison fog!) is certainly better than the bad CGI in the original, but bad CGI by any other name is just as stinky. Fortunately, Lawrence and his team give the Quarter Quell sequences a good sense of urgency and keep the action moving at a brisk pace. My watch died on me the day before I saw this movie, so I couldn’t officially tell you if the Hunger Games in Catching Fire took up less screen time than they did in the previous film; the important thing is that they definitely felt like they took up less time. (For the record, Catching Fire clocks in at 146 minutes, just four minutes longer than the first film.)

The Hunger Games: Catching Fire is presented in its original aspect ratio of 2.40:1. Unfortunately, you do not get the IMAX aspect ratio change at the beginning of the arena scenes. The ultra-high-definition image is arrived at by an HEVC codec. With such a visual franchise you would expect this ultra-high-definition image presentation to shine. You would be correct up to a point. Lionsgate made a serious fatal flaw in this franchise for 4K release. They included the feature-length bonus material on the 4K disc. That takes up serious space and bit-rate. So you end up with a film that is a definite improvement over the Blu-ray, but not likely as much as it could have been. This film also relies on a nice vibrant use of colors once inside the actual arena. It’s a rich jungle with rather lush greens. They do pop here but once again lose a little of the depth I associate with this new format. Black levels are good but not excellent. The baboon scene often loses its sharpness and the ability to define elements on the screen. Of course, that could well be a product of the computer-generated limits of the scene itself.

The Dolby Atmos presentation defaults to a nice 7.1. The audio presentation does not suffer from the crowded disc space. There is a lot of depth here. Surrounds give you a wonderfully immersive experience with just the right balance of aggressiveness and a rather stunning use of silence. Dialog cuts through perfectly. I remember James Newton Howard when he was part of the Elton John Band, and he has become a pretty clever composer over the years. This is one of his best, and it is used nicely to convey emotion and drama throughout the film. It’s both dynamic and near-silent when it needs to be. The subs will bring you a ton of power, but again only at the right times.

There is an Audio Commentary with Director Francis Lawrence and Producer Nina Jacobson.

Surviving the Games – Making Of The Hunger Games: Catching Fire: (2:24:56) Again, someone went to the Peter Jackson school of extras. While this really should have been on its own disc, this feature is longer than the film itself and goes into every aspect of the film you could ever want. There’s a ton of participation from cast and crew with a ton of behind-the-scenes footage. There are nine parts this time with a play-all option. This is what features should be. Don’t make me work to see a few minutes at a time. Other studios need to take note here.

It just shouldn’t have been on the 4K disc.

Deleted Scenes: (4:36) There are six with no individual selection.

If you’re not a Hunger Games fan, you may not be aware that Catching Fire is essentially the Empire Strikes Back of the book trilogy. So don’t expect a definitive conclusion to this story just yet. Instead, expect an exciting film that is savvier than the average blockbuster. Meanwhile, long-time fans should expect a faithful, satisfying adaptation that improves and expands upon the previous movie. “Last year was child’s play.”