Posted in: Disc Reviews by Jeremy Butler on December 8th, 2016 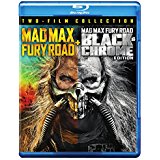 It was rumored from the very beginning that George Miller was considering a black & white format for the film. There are box office risks associated with such a brave choice. We’re hearing some of the same thoughts coming out of the Logan shoot. The nice thing about the sophistication of home video today is that there is now an outlet for those kinds of artistic choices, and this is a pretty solid example of it. It’s hoped more of these kinds of alternate ideas can make it to home video giving filmmakers the chance to unleash things that might just be too risky at the box office. You still get the original film as part of of this combo so you’re not giving anything up.

It is one of the most anticipated movies of the summer and another subject in the category of “can Tom Hardy do no wrong?” Mad Max: Fury Road is the reimagining of the iconic film that helped launch Mel Gibson’s career decades earlier. This is not new territory in Hollywood by any stretch of the imagination; remakes have happened so often in recent years that they have practically become their own genre. However, I would like to point out something that will hopefully set this film apart in the eyes of the audience: how often do you see a remake that is overseen by the creator of the original film that you know and love?

OK, OK, perhaps this is not entirely new territory as well, except I am certain that Mad Max fans all over the world leaped for joy when news broke that the architect of the originals, George Miller, had decided to helm the remake as well. Heck, it wouldn’t surprise me to learn that is the underlying reason that many of you folks intend to see the movie. And it is in that spirit that I would like to impart a piece of advice upon the future audience: put the past out of your mind when you are watching this. It is not a continuation, it is an origin story. Yes, I know that it seems like a simple concept, and maybe I am rehashing thoughts you have already had, but for argument’s sake, just do what I ask, and I promise you will have a far better experience.

When the story starts, we are thrown right into the thick of things. A mildly irritating voiceover from Hardy informs that the world has changed; a global catastrophe has remade the world into a barren wasteland where resources are limited and survival is low. When we meet Max, he is on the run from a group loyal to Immortan Joe, a tyrannical leader of a desert wasteland. Joe is in control of all the resources needed for survival such as water, weapons, vehicles, gasoline, and milk (wait till you see where it comes from). In this vast world of nothingness even people are treated as property, which leads us back to the reason the gang is pursuing Max, who is a universal blood donor. Despite valiant escape attempts (emphasis on attempts), Max is captured and taken to the wasteland.

Around this time, Immortan Joe is sending one of his disciples, Imperator Furiosa (Charlize Theron) to secure more gasoline from a neighboring society that Joe is allied with. Furiosa, however, has her own plans, which she sets in motion on the road: she has stolen Immortan Joe’s most prized possession, the five wives: five young women Joe has married and plans to use as breeders to continue his bloodline. Discovering the betrayal, Joe and his army ride out in pursuit of Furiosa, and through happenstance Max is taken along for the ride. During the pursuit, Max manages to free himself, and his path crosses with Furiosa. Tension arises, and though the two don’t fully trust each other, they recognize that they will to work together to make it across the wasteland to a safe haven, all while under heavy pursuit.

One thing that was downplayed was Max’s history. Virtually nothing is revealed about him other than the display that all his mental faculties aren’t quite there. Earlier trauma is hinted at, and I can’t help but feel that a reveal of that trauma would have gone a long way toward making it possible for me to identify with the character. It is still a compelling story with hardcore action sequences, but these omissions did do some damage to the overall success of the film. Not irreparable damage, but some damage.

Not going to spend a lot of time on actor portrayals, because the fact of the matter is that many of the talents in this film are seasoned veterans at the peak of their art, but I will take the time to mention Nicolas Hoult, who played Nux in the film. Hoult, who is no amateur by anyone’s measurement, does an admirable job of stealing focus away from the more high-profile Theron and Hardy. It goes without saying that Theron and Hardy did their characters justice. I will say that it took me a while to like Theron’s character, who in the beginning seemed cold and distant, even vindictive, when she essentially deceived a pack of loyalists into becoming unwitting traitors. These feelings went away rather quickly when it became evident all the character had lost and what she was willing to give up to succeed in her mission. OK, I will mention Hardy, and then I am done. Hardy makes the character his own in my opinion; despite the fact that the audience knows next to nothing about his backstory, we know that he is in possession of a very moral code. His character is also very stoic in the fact that he speaks in short sentences, but the words he uses convey serious meaning.

Mad Max: Fury Road Black & Chrome Edition is in its original aspect ratio of 2.40:1. The 1080p image is arrived at with an AVC MPEG-4 codec at an average 35 mbps. George Miller says this is the best version of the film. I don’t agree. There are some nice different takes on the atmosphere because of the black & white presentation. The problem is the amount of stuff we also lose. There’s a lot of fire here that isn’t anywhere near as dynamic. The same can be said for the berserker spray, which gets completely lost in translation now. There were wonderful sky vistas that no longer impress. The cars look pretty cool in black & white, but I didn’t feel as immersed.

The Dolby Atmos translates to a 7.1 track for most of us. It’s totally alive with the sounds of engines, explosions, and grinding score. There isn’t a lot of a dialog here, but I’m somewhat astounded that it comes through as clear as it usually does with such a manic audio presentation. Silence doesn’t come often, but when it does, it’s a bit unsettling. Surrounds fill the audio field with crowd noises or the various engine sounds. All the while the percussion score drives the sound forward. This is a wonderfully immersive experience that can completely dominate your space with non-stop sub shaking a good theatre setup with its thunderous dynamic sound. In short: it’s loud and everywhere.

You get a copy of the standard Blu-ray with the original extras:

New Introduction To The Chrome Edition: (1:34)

Maximum Fury – Filming Fury Road: (28:37) Cast and crew offer up their candid thoughts on the grueling production in the African desert. There is plenty of behind-the-scenes footage that highlights the production design and harsh locations. There’s a bit of talk here on the evolution of the Mad Max character from Mel Gibson to Tom Hardy, who had lunch with Gibson to get his blessing.

Mad Max – Fury On Four Wheels: (22:37) The machines have always been the big draw for these films. This is a closer look at many of the vehicles in the film. You get conceptual art and a primer on their various functions.

The Road Warriors – Max And Furiosa: (11:18) This is a profile on these characters with plenty of input from the actors who play them.

The Tools Of The Wasteland: (14:26) This feature takes a closer look at the props and gives us the logic behind the various designs.

The 5 Wives – So Shiny, So Chrome: (11:11) Character profile on the five wives characters with plenty of input from the ladies themselves.

Fury Road – Crash & Smash: (4:02) This is raw footage to demonstrate how much of the vehicle stunts were practical effects with only CG enhancements. This is what it looked like without any CG.

Deleted Scenes: There was a lot of talk about cut footage, and I know there’s far more than the three simple scenes here. I think we’re looking at an extended cut down the road. There’s also talk of a black & white version to come. These come with no play-all and have little of note to offer.

All in all this is a very enjoyable experience, one of the better action movies that I have seen this year. The film is not big on backstory or formal introduction, as I went through a majority of the film without knowing most of the characters’ names. There were the few that were spoken aloud such as Max, Furiosa, and Joe; however, many of the characters’ names were not readily used, or if they were, not much emphasis was placed on them. This in the long run is trivial in comparison with my real issue with the story. I would have liked to have had a little more backstory on how the world collapsed. We see the destruction, but there is no real explanation for the events that led to it.

Jeremy Butler is a film school graduate of the International Academy of Design and Technology. He is been writing for Upcomingdiscs since 2012; however, movies have played a big part of his life for much longer. Favorite genres include horror, science fiction/fantasy, and comedy. Favorite movies are V for Vendetta, Boondocks Saints, Kiss Kiss Bang Bang, and The Godfather.
Jason Bourne (UHD Blu-ray) (4K) Holiday Gift Guide Spotlight: Mission: Jimmy Stewart and the Fight for Europe