Posted in: The Reel World by Brent Lorentson on December 15th, 2016 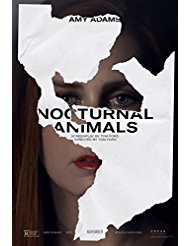 In 2009 Tom Ford, the famed fashion designer, came into the Hollywood scene with his stunning first-time writing/directing effort, A Single Man.  It was a somber film that garnered numerous accolades and left many of us wondering what he would be doing next.  It’s been seven years, but we finally get the follow-up film we’ve been waiting for.  Nocturnal Animals is clearly a film that cries out for award attention with its December release and a cast that for better or worse could make a dramatic reading of a telephone book an engaging experience.  When the trailer dropped for the film, I was sold on its stunning visuals and its ambiguity that had me hooked and curious about what Ford would have in store for us. Unfortunately, I exited the theater feeling I had just witnessed the most passive-aggressive revenge film I had ever seen, and to be clear, I don’t view this as a good thing.

Nocturnal Animals without a doubt makes its impression in its opening moments that if I’m being honest, it has to be one of the most memorable opening sequences I’ve seen this year.  I wouldn’t dare spoil this for any filmgoer, but I have to admit it left me scratching my head as to how it all connected to the rest of the film.  I have my own theories, but that is something to be shelved for another day.

When we meet Susan Morrow (Amy Adams), it is at her art gallery where she is displaying the “work” of a new artist.  She’s bored with it all, and when she returns home, it’s to her marriage that seems to have lost its spark as well.  Sure, her husband Hutton Morrow (Armie Hammer) is handsome, but he is struggling to maintain their income to accommodate the upscale life they have become accustomed to.  It’s obvious this is a relationship in disrepair, but that’s not the focus of the film.  Instead it’s on a mysterious package that Susan receives from her first husband Edward (Jake Gyllenhaal).  He’s sent her a copy of his book, Nocturnal Animals, that he has dedicated to her.  This seems a bit odd considering how she feels she hurt him in the past, but nevertheless Susan decides to read the novel to discover for herself why the work is dedicated to her.

This creates a film-within-a-film scenario where we get to watch the novel play out as she reads along. Tony (Gyllenhaal) is planning on taking a trip with his wife, Laura (Isla Fisher) and his teenage daughter India (Ellie Bamber).  Their trip is a scenic one that takes them through the scenic back roads of Texas where at night the family comes across a group of men in a car that want nothing more than to terrorize the family.  This portion of the film is some of the most intense sequences I’ve seen all year; it’s the thing of nightmares families should have that dare to take the scenic route.  What Jaws did for swimming in the ocean, this sequence should do the same for families taking the scenic route on a road trip.  The result of this sequence leaves Tony alone in the Texas desert as he stumbles into town and is questioned by an old school Texas cop, Bobby (Michael Shannon).  Tony and Bobby work together to retrace the previous night and as a result discover the horrific end that his wife and daughter have come to.  This of course kicks off a manhunt the two men take on to find the men responsible.  Aaron Taylor-Johnson puts in a great performance as one of the men who terrorized the family and without a doubt makes his mark as a menacing villain.

As Susan goes on to read the tale that has been woven in her name, she sets off to reconnect with her ex as we slowly begin to see how their once simple, yet sweet romance soured.

When it comes to the first 2/3 of the film, this is easily terrific cinema, and it had me loving this film.  The story had me hooked, and I was at Ford’s mercy as he drug me through this tale of darkness of the human soul.  But then as the film ended, I simply felt cheated.  No, not in the way where I’m not happy where the story goes, but instead it left me with too many questions that were left unresolved.  I’m not going to spoil anything simply because I feel the final act is never even explored and just abruptly arrives as though no one knew what else to do, so they just take the easy way out.  I have my own theories for why this is, and to a degree perhaps my feeling this way is part of what Ford intended, but forgive me for not embracing this as an artistic decision, but instead being lazy.  Sure, I understand this was adapted from the novel by Austin Wright; I have not read the novel, but come on, if this is how the novel ended, it isn’t unheard of for Hollywood to change things.  I’m so frustrated by this film, so much so that this was a film I felt could have been one of the best movies I’ve seen all year, but now it is one of the year’s biggest missed opportunities.

Everything is on point here, the cinematography is tremendous as each storyline has its own distinct look and tone and is a work of art on its own.  The costume design, while subtle, is also on point where we get to see Ford’s fashion design slip into each of the characters.  But the crowning achievement of this film is the performances; everyone here is so good, and I wouldn’t be surprised if the core four of the cast came away with nominations, and they are well deserved.  But I’m a guy who cares about story, and where this film was just straddling a 4.5 during most of the film, how the film plays out is why it loses a point.  It’s a film I want to watch again, and perhaps my feelings will change (though doubtful).  Nocturnal Animals is a film that I’m certain will make an impression and most likely will divide fans, and I suppose in its own way that what makes it unique and a piece of art that leaves it up to the viewer what they will walk away with.

Brent Lorentson is a horror writer and film critic based out of Tampa, Florida. With a BA in Digital Film, he co-wrote and co-directed Scavenger Hunt. His short stories have appeared in various horror anthologies. In 2019 his short script Fertile Blood will be a part of the anthology horror film Slumber Party. He is currently working on his first novel A Dark and Secret Place set to be released in late 2019. Favorite Films: Taxi Driver, Fight Club, I Saw the Devil, The Wild Bunch, Dawn of the Dead, A Clockwork Orange, Pulp Fiction, Heathers, The Monster Squad, and High Fidelity.
Suicide Squad (UHD Blu-ray) (4K) Rogue One: A Star Wars Story