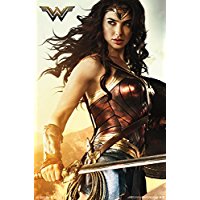 “You have been my greatest love. Be careful, Diana…they do not deserve you.”

Ever since Richard Donner made us believe that a man can fly with 1978’s Superman — considered by many to be the first modern superhero film — we’ve gotten three different Men of Steel, along with five different versions of Batman (if you don’t count Will Arnett’s voiceover work). Heck, in the last 15 years alone we’ve had three Spider-Men and (incredibly) gone through three Hulks! Yet in all that time, a movie starring Wonder Woman — a superhero just as iconic as all the ones I just mentioned — could never get off the ground…until now. I’m happy to report it was worth the wait.

“Maybe one day you’ll tell me your story.”

Wonder Woman was created by writer William Moulton Marston, artist Harry G. Peter, and made her debut in All-Star Comics #8 in October 1941. That means the character is almost as old as Superman (first published in 1938) and Batman (1939), although she consistently looks phenomenal for her age. Speaking of her agelessness, this film starts with a prologue in present-day Paris with Diana (Gal Gadot) reminiscing over a World War I-era photo of herself and a group of rugged men. This scene was featured in last year’s Batman v. Superman: Dawn of Justice, so this entire Wonder Woman film can technically be considered a prequel to that sour superhero slugfest.

However, Wonder Woman quickly distinguishes itself by transporting us to the bright, idyllic island of Themyscira, land of the Amazonians. Young Diana dreams of becoming a fierce warrior but is discouraged by her mother Queen Hippolyta (Connie Nielsen), who tells the story of how the God of War Ares corrupted mankind and killed all the other gods. With his last ounce of strength, Zeus is said to have bestowed the Amazonians a weapon capable of destroying Ares, should he ever return.

Diana eventually grows up to be the greatest warrior on Themyscira, thanks to guidance from her aunt Antiope (Robin Wright). She is forced to put her skills to the test when a pilot named Steve Trevor (Chris Pine) crashes off the coast of the Island. Steve is the first man Diana has seen in her life, and he is quickly followed by a bunch of German soldiers who bring with them a bloody conflict. Through Steve, the Amazonians learn of the World War brewing outside their island paradise, and Diana becomes convinced this War to End of All Wars is proof that Ares has returned. As a result, Diana defies her mother’s orders and leaves her island home for the first time with Steve to find Ares and stop a war that is threatening to destroy all of mankind.

Gadot made an impressive debut as Diana/Wonder Woman in Batman v. Superman, but this first solo adventure is a huge deal. There have been attempts to bring Wonder Woman to the big screen for more than 20 years, with everyone from Ivan Reitman to (more famously) Joss Whedon attached to the direct. The list of actresses who have been rumored to don the character’s iconic tiara and indestructible bracelets — Sandra Bullock, Lucy Lawless, Angelina Jolie, Beyonce Knowles(!) — is even longer. (It has to be noted that Lynda Carter’s work in the 1970s Wonder Woman TV series left an indelible mark.)

DC and Warner Bros. eventually settled on director Patty Jenkins, whose only other big-screen foray was 2003’s gritty Monster. Jenkins, working from a script credited to Allan Heinberg, excels at building a credible and worthy hero and (perhaps more importantly) making a DC superhero movie that actually has a personality. Despite being a globe-trotting action/adventure with a budget around $150 million, Wonder Woman is best in its smaller moments. I’m thinking about the scene where Diana and Steve get to know each other on a tiny sailboat; I was struck by how long that scene was and grateful that Jenkins and DC’s brass were generous enough to let those kinds of character moments breathe without too much bombast.

It helps that Gadot and Pine have terrific chemistry. Gadot, in particular, delivers a star-making performance here as Diana. Beyond looking the part — when everyone in the film fawns over Diana’s otherworldly beauty, it doesn’t feel silly or over-the-top in the least — Gadot brings great strength, compassion, and even a deft comedic touch to the role. (There’s some of the same fish-out-of-water humor we got in Marvel’s Thor.) Meanwhile, Pine brings the same roguish charm he’s brought to Captain Kirk to Steve, which is exciting because the actor is playing what is usually a pretty thankless girlfriend/love interest part in a superhero movie. It’s a satisfying inversion that Pine further sells by bringing a layer of loneliness and melancholy to the role. The pair get solid and funny support by the likes of Said Taghmaoui, Ewen Bremner, and Eugene Brave Rock, who play Diane and Steve’s rag-tag World War I squad (and recall the Howling Commandos from another Marvel movie: Captain America: The First Avenger.)

Danny Huston appears as General Erich Ludendorff, a brutal German general who wants to wreak havoc even as the war appears to be winding down. (David Thewlis co-stars as Sir Patrick Morgan, a Speaker for the Peace.) General Ludendorff enlists the expertise of the disfigured Doctor Poison (Elena Anaya) to create a deadlier form of mustard gas that threatens to annihilate all soldiers. Diana becomes convinced that Ares is working through Ludendorff, and it unfortunately results in the movie’s biggest letdown. The climactic battle is the same sort of grim, bombastic showdown that Zack Snyder brought to Man of Steel and Batman v. Superman. (Snyder was tapped as the creative godfather of the DC Extended Universe prior to his recent personal tragedy.) It’s basically two CGI puppets throwing trucks and shooting lasers at each other…and it’s dull as dishwater, and it unfortunately doesn’t leave a great taste in your mouth after such a rousing first two hours.

In fact, almost all of the movie’s action sequences take their cues from Snyder’s hyperstylized, slo-mo aesthetic, and they are consistently the weakest parts of this movie. (The exception is Diana’s chill-inducing sprint across No Man’s Land.) That being said, Wonder Woman does successfully deploy some of the character’s most iconic accessories, including the Bracelets of Submission and (more amusingly) the Lasso of Truth.

Wonder Woman is easily the best and most satisfying movie in the DC Extended Universe. (Insert your own joke about how that’s like being the tallest person in a midget convention.) More importantly, it is a worthy debut for a classic comic book character that had to wait much too long for a starring role on the big screen.