Posted in: Disc Reviews by Gino Sassani on August 31st, 2017 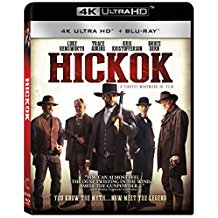 “Sometimes it takes a good man to stop bad people.”

And sometimes you can have good actors and a rich genre to draw upon with classic characters and still not get the job done. Sadly, that’s the big story for Hickok. This one arrived with some rather high expectations. It was being released in 4K, which appeared to signal some confidence from Cinedigm, who are just entering the UHD fray. The cast is also a good sign. Luke Hemsworth plays the titular character with a supporting cast that includes legend Bruce Dern, Trace Adkins, and Kris Kristofferson. You have the built-in interest of a real western frontier icon in Wild Bill Hickok. Everyone knows who he is. His legend is recalled to ever poker player who’s holding aces and eights in their hand. But none of that legend is really explored or exploited here. It’s merely the name that carries the weight, and poorly at that.

The film introduces us to a Wild Bill Hickok who isn’t being so wild these days. He’s trying to live a quiet life wandering from town to town. When he comes upon Abilene, he finds himself in the middle of a struggle for power in the town. He’s approached by George Knox (Kristofferson) to take the badge of Marshall and restore order to the restless town. He’ll even get a bonus for every arrest, although not for everyone he shoots. He takes the badge and immediately begins to install reforms, after wasting some bad guys on day one. He forces the poker game in the salon to be on the up-and-up, and he bans firearms within the city limits. He should have asked Gene Hackman’s Unforgiven sheriff just how well that worked out for him. He makes the mistake of getting between abusive Phil Poe (Adkins) and his wife Mattie (Richardson) who has a pretty big crush on Hickok. Eventually the townsfolk are forced to take sides, and the anticipated showdown arrives.

The big problem with the film is a rather glaring lack of structure. There’s nothing grand or heroic going on here. The big confrontations end up being partially his own fault. His conflict with Poe stems as much from his flirting with the guy’s wife and her obvious display of preference for the lawman. It is kind of anticlimactic that there would be a showdown, and the final battle is pretty weak as western climaxes go.

I understand there was a rather limited budget here, but shots are often more like the old  4×4 television framing than anything cinematic. Director Timothy Woodward Jr. doesn’t appear confident in his location or production design. Or perhaps it’s a sign of inexperience. The unfortunate result of his cinematography style is that conversations don’t appear to be happening together. He relies more on tight pan and scan, and you have to ask yourself how much interaction these actors actually had. The only result of that is a lack of chemistry and even good actors appearing to read through bad dialog.

Hickok is presented in its original aspect ratio of 2.39:1. The ultra-high-definition 2160p  image is arrived at by an HEVC codec with an average bitrate of 80-90 mbps. No doubt there is a pretty solid bit-rate going on here, but that’s all. The film looks very much like a low-budget digital shoot and doesn’t approach anything that I haven’t seen on a mediocre Blu-ray. Black levels are pretty deep with inky blacks, and the picture is about as sharp as a Blu-ray. There’s no texture here, and colors have an unnatural quality to them. It looks like fake lighting. No system showpiece here.

It’s a pretty tame DTS-HD MA 5.1 track here. There’s no attempt to utilize the superior codex for UHD audio. Of course, there’s really no reason for it. The dialog is all that is served here, and I might actually give this one a try with the audio off. Who knows?

Deleted Scenes: (2:50) There are three with a play-all option.

The Road To Abilene – The Making Of Hickok: (14:36) Mostly raw behind the scenes footage. Cast and crew offer a few thoughts. Not much really to see here.

If you’re looking for wide open spaces and John Ford-style vistas, you will be disappointed in this movie. The truth is you’ll be disappointed in every aspect of this film. Usually I try to point out something that was a standout, but there’s little to none of that here. The film doesn’t add to the legend of the man and doesn’t really even appear to care much about the character’s history. It’s just a name, and this film is absolutely holding Aces and Eights. You either cash in or “you die”.

Gino Sassani is a member of the Southeastern Film Critic's Association (SEFCA). He is a film and television critic based in Tampa, Florida. He's also the Senior Editor here at Upcomingdiscs. Gino started reviewing films in the early 1990's as a segment of his local television show Focus. He's an award-winning recording artist for Omega Records. Gino is currently working on his 8th album Merchants & Mercenaries. Gino took over Upcomingdiscs Dec 1, 2008. He works out of a home theater he calls The Reel World. Favorite films: The Godfather, The Godfather Part II, The Body Snatcher (Val Lewton film with Karloff and Lugosi, not the pod people film), Unforgiven, Gladiator, The Lion King, Jaws, Son Of Frankenstein, The Good, The Bad And The Ugly, and Monsters, Inc.
Elementary: The Fifth Season Disneynature: Born in China (Blu-ray)