Posted in: Disc Reviews by Jonathan Foster on September 5th, 2017 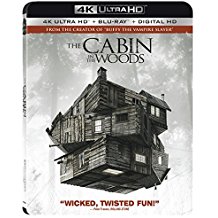 “No, they have to make the choice of their own free will. Otherwise, the system doesn’t work. It’s like the Harbinger. It’s this creepy old f#$%, practically wears a sign, ‘You will die.’ Why do we put him there? The system. They have to choose to ignore him, and they have to choose what happens in the cellar. Yeah, we rig the game as much as we need to…”

When I first heard about The Cabin in the Woods, I admit I was not impressed.  I thought it was just another run-of-the-mill slasher flick a la The Last House on the Left or Amityville Horror.  My mind quickly changed, though, as soon as I heard that Joss Whedon was the writer.  A dyed-in-the-wool Whedonite, I knew that if this movie had the same kind of wit, humor, and horror found on Buffy the Vampire Slayer and Angel, that I would really enjoy it.

The opening of The Cabin in the Woods makes you feel like the wrong movie got put in the box.  Rather than your typical horror opening, it starts with two office workers (Richard Jenkins & Bradley Whitford) griping about personal issues and how this is going to be “a long weekend here at work”. After a bit of odd talk about how only their group and the Tokyo group are the only groups that haven’t failed their “scenarios”, the film cuts to the five unsuspecting victims youths. Dana (Kristen Connolly) is going on a trip set up by her roommate/best friend Jules (Anna Hutchinson) and Jules’ boyfriend, Thor Curt (Chris Hemsworth). They want to help Dana get over her recent breakup by getting her away from her books and setting her up with Curt’s friend, Holden (Jesse Williams). The fifth member of this trip is Marty (Fran Kranz), your typical stoner/conspiracy theorist.

What follows after the kids start their trip is your typical horror movie fare, but with a twist.  We see the five kids commit the same things young people usually do in horror movies, but now we see WHY.  We see the technicians in the control room manipulate everything from the beginning. When I say everything, I mean EVERYTHING.  The ambient temperature outside, the moonlight, the type of beer they drink are all controlled by these people.  They even have a gas that makes the group decide to split up, just like Scooby-Doo. As the film progresses and we see the reason this outside group is sacrificing these people, I almost found myself rooting for the kids to die.

This movie follows a very distinct three-act formula, and the pacing of it makes it just fly by.  I was totally immersed, trying to predict what would happen next, that neat the end of the movie, I couldn’t believe it was almost over.  The dialog is typical of Joss Whedon, and will be familiar to fans of any of his work.  He has a distinct style with words: smart, snazzy, and at times, spit-take funny.  I swear, I spent equal times laughing as I did jumping out of my skin.  Marty and the two technicians have the bulk of the comedy, such as Marty calling a stuffed wolf head a moose and Jenkins’ technician yelling at a Japanese demon, “How hard is it to kill a nine-year-old?!”

All the actors playing the college kids are really excellent, considering they play two roles: who their characters are, and who their characters are manipulated to be.  This was filmed in 2009, but got delayed when MGM went bankrupt, so Whedon and Goddard took a chance on unknowns Kristen Connolly & Chris Hemsworth as their main actors for their films.  Connolly & Hemsworth, along with Fran Kranz, bring richness to characters that could easily be one-dimensional and boring.  My favorite character is Marty.  Kranz plays this stoner with humor and vulnerability, yet keeps it understated and doesn’t go too over-the-top, so his heroics are more believable at the end of the movie.

The Cabin in the Woods is a film that turns the horror genre on its head and takes its lunch money, but does so in such a way that almost seems like it’s helping the genre out. It’s almost as if Whedon and Goddard are saying, “Look, there’s room for intelligence in this genre. You can do better.”  This movie is gory and bloody like the genre demands, but still has a grace and charm all its own.

Cabin In The Woods is presented in its original aspect ratio of 2.40:1. The ultra-high-definition 2160p  image is arrived at by an HEVC codec with an average bitrate of a sweet 80 mbps. This ultra-high-definition image presentation is a wonderful gift to the fans of the film. The colors aren’t going to be vivid or pop at all. This was filmed in an atmospheric and dark style with intentional desaturation of most colors. The notable exception here is a very nice deep crimson blood color. The black levels are excellent, allowing for deep inky blacks and solid shadow definition. That’s all helped by a nice use of light and contrast. A face peering into a dark room delivers perfect lines. Some of the CG is a bit more obvious in this release. I think that’s to be expected. Likely that stuff was rendered in HD. The image is sharp and delivers a level of detail and texture you haven’t experienced since you were watching this thing at your local multiplex.

The Dolby Atmos presentation defaults to a brilliant 7.1 track. All of that creepiness you remember is there, plus even more. The surrounds are immersive while never getting too aggressive. The score sets an atmosphere without stepping on any of the other sonic delights. The best stuff comes when they are encountering the many creatures near the climax. Such a variety of nasty and eerie sounds you’ve never heard. All the while dialog punches through nicely. The subs are pretty active and deliver everything from just adding depth to the dialog to shaking the room during the final moments of the film. It’s a crisp, clean presentation that immerses you into every second of the experience.

Extras are on both copies of the film:

It’s Not What You Think: The Cabin in the Woods BonusView Mode: Video clips featuring Goddard, Whedon, the set designer, and candid comments from the actors.

We Are Not Who We Are: Making The Cabin in the Woods: (28:33) Co-writers Joss Whedon and Drew Goddard talk about creating Cabin, and give an in-depth look into the casting process.

Marty’s Stash: (8:04) Actor Fran Kranz gives a detailed look at Marty’s marijuana habit, shows off all the props he uses in the film, and talks about learning how to roll a joint.

Hi, My Name is Joss and I’ll Be Your Guide: (6:02) Joss Whedon gives a detailed tour of the cabin and how everything was set up for filming.

An Army of Nightmares: Makeup & Animatronic Effects: (12:10) An in-depth look as to how all the live-action monsters were made for the film.

Primal Terror: Visual Effects: (12:07) A behind-the-scenes look at all the digital and CGI effects used in The Cabin in the Woods.

The Cabin in the Woods is a smart, bloody, funny horror movie. As a Whedonite, I enjoyed seeing three Whedon alumni (Fran Kranz, Amy Acker, Tom Lenk) in this film.  I also loved playing “Spot the Whedon References”. I found about a dozen, including a reference to lesbian witches on the technician’s whiteboard.  The special features were a bit weak, with only the commentary by Whedon & Goddard, the special effects features, and Joss’s tour of the cabin worth watching. The same clips of Goddard and Whedon are reused relentlessly, making much of the special features redundant. However, the movie itself should be an instant buy for any movie fan, but especially horror and Whedon fans.  I wholeheartedly recommend it.