Posted in: Disc Reviews by John Delia on September 28th, 2017 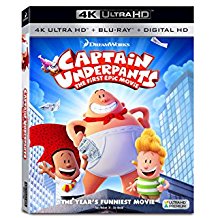 Taking a few ideas from superhero films, the animated adventure Captain Underpants: The First Epic Movie flies onto DVD, Blu-ray and Digital HD for home viewing.  The comical kids’ movie has some great characters and a cool plot that will keep tots to tweens laughing and talking about the fun film.  The movie comes with over 30 minutes of fascinating extras, mostly for the youngsters. The movie opens with fifth-grade-schoolers George Beard and Harold Hutchins showing off the comic book they created about a world called “Underpanty” where people only wear underwear.  Much like the beginning of Superman, there hero gets catapulted to Earth from a distant planet about to blow up.  Landing on Earth, the child starts to save cities from the likes of Egg Salad Sandwich Man.

Switch to reality and we find George and Harold in the school yard being surprised by their Principal, Mr. Krump. He thinks that George and Harold spend too much time thinking up and drawing comic book characters instead of schoolwork. The boys are remanded to Krump’s office where he goes over many of the pranks the two have played and warns them if he ever gets proof, they’ll be sorry.

The two boys have a tattletale watching over them named Melvin, who would like to see George and Harold get expelled. In math class an announcement comes over the intercom about Saturday’s mandatory invention convention.  That afternoon after school the boys meet at George’s treehouse, their headquarters for Tree House Comix Inc. When they play a prank on Melvin at the invention convention and get caught, Krump places them in separate classes as their punishment.

Now this all happens in the first 13 minutes of the film. So what about Captain Underpants?  Well, you’ll just have to watch the movie for the greatest adventure of George and Harold. Director David Soren sets up his audience for a lot of fun that includes an accidental hypnosis, the evil Professor Poopypants, and an invention that can take over the world.

The voice cast includes the familiar Ed Helms (as Andy Bernard in The Office), Nick Kroll (as Gunter in Sing), Kevin Hart (as Snowball in The Secret Life of Pets), Kristen Schaal (as Louise Belcher in Bob’s Burgers) and Thomas Middleditch (as Penn in Penn Zero: Part-time Hero).

Captain Underpants is presented in its original aspect ratio of 1.85:1. The ultra-high-definition 2160p image is arrived at by an HEVC codec with an average bitrate of 75 mbps. This is a computer-animated figure, so I expected it to be bright and colorful. I was not disappointed. The colors were vibrant and really popped throughout the film. The image was sharp and very clean. Well-defined animation lines are reproduced here to perfection. The image is a bit glossy and sometimes a bit bright. There isn’t a lot of texture here, but there are some photo-realistic moments to highlight the presentation. Black levels are pretty sweet but seldom called upon. It’s a bright, shiny plaything for the targeted audience of youngsters.

The Dolby Atmos presentation defaults to a nice 7.1 track. The surrounds are not particularly aggressive and used primarily for accents to the film’s score. It’s a dialog-centered film, and that’s where the focus can be found on this audio presentation. There’s a little ear candy to hold the short attention span. The subs kick in for some of the silly tension moments but are otherwise rather tame.

Deleted Scenes: (11:00) There are five with no individual selection and an intro from the director. They are presented in an animated storyboard format.

The Really Cool Adventures Of Captain Underpants: (2:02) A motion comic.

The Captain Underpants Guide To Being A Hero: (3:51) Clips from the film are used to give the general rules for being a hero like having a secret identity.

The Professor Poopypants (Totally Original And Super Cool) Guide To Being A Villain: (3:51) The title runs longer than the feature that really tells us there are no rules.

The rest of the features are a minute average and are really promos for the film including Trailers and a Gallery.

Be cautious when deciding to allow immature children see the film, as it does have some scenes that are inappropriate for youngsters.

John Delia has been on all sides of the movie business from publicity, writing for publications and on line blogs, script writing, to film making. Writer, critic, film editor he has worked as a film critic on this second go around for 14 years. He earned his Bachelor’s degree at the college of Journalism and Communications at the University of Florida in Gainesville, Florida. John is an active member of the Southeastern Film Critics Association (SEFCA) . Favorite Films: Lord of the Rings/Hobbit trilogies, The Godfather trilogy, the Indiana Jones trilogy (I didn't like the 4th), The Avengers and for TV it's Game of Thrones. As for animation it's a tie between anything Pixar and everything Hayao Miyazaki.
Conan The Barbarian (UHD Blu-ray) (4K) 2:22 (Blu-ray)