Posted in: Disc Reviews by Gino Sassani on October 13th, 2017 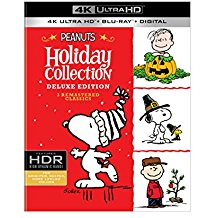 At first glance you would not expect 50 year old cartoon television specials to be this high on the UHD 4K list. Honestly, I was a bit surprised myself. But when you really think about the staying power of these cartoons you realize they’ve made an emotional connection to generations of children of all ages. I grew up on the Peanuts creations of Charles M. Schulz. Most of us have, in some way or another. His newspaper comic strip is one of the longest running and most successful strips of all time. The work has been translated into every language currently spoken on the planet. The images of Charlie Brown, Snoopy, Linus, and the rest of the Peanuts gang have appeared on just about any kind of product imaginable. Our pop culture contains too many references to the strip to mention briefly. For me, it was the television specials starting in the mid 1960’s that brought the gang into my life. The classics are running annually, still after nearly 50 years. A Charlie Brown Christmas, A Charlie Brown Thanksgiving and It’s The Great Pumpkin, Charlie Brown are the most mentioned and certainly beloved by generations of children and adults. I thought I never missed an airing.

This is one of the most endearing and enduring of the franchise. It’s loaded with memories too many to mention them all here. Charlie Brown tries to direct the school nativity play. He finds it hard to get the gang’s cooperation. In his own despair he discovers the true meaning of Christmas. Some of those memorable moments that I will never forget include: the scrawny little tree that Charlie Brown picks out, held up by Linus’s blanket. Snoopy wins first prize in a house light decoration competition. Of course the best of the best comes in the end when Linus recites the story of the birth of Christ. Today most people would be shocked to see a public school putting on a nativity play. Watching this one is a sad reminder of how much these basic principles have been swept away by intolerance and misrepresentation of “Jefferson’s Wall”, that First Amendment separation of church and state. This short, more than the others, is truly a product of its time. It depicts an America that no longer exists.

This has to be an all-time favorite and likely the most popular. Linus tells the gang of the story of The Great Pumpkin who rises from the pumpkin patch on Halloween Night to give candy to the boys and the girls. No one actually believes him. Still Charlie Brown stays with Linus as he stands vigil over the patch to catch a glimpse of The Great Pumpkin. It’s a heartwarming story with plenty more of those classic Charlie Brown moments. If you’ve never seen this special, you must have been living in a coma for the last 50 years. Buy the set, if only for this one.

It’s easily a classic along with the other three main holiday specials. Peppermint Patty invites herself and the entire gang over to Charlie Brown’s house for Thanksgiving dinner. The problem is that Chuck doesn’t know what to make. The feast ends up being a disaster of popcorn, candy, and burnt toast. All is not lost. Thank God for Grandma.

Thse cartoons are presented in their original full frame broadcast aspect ratio. There is not a ton of difference here. You have the same restorations from last year’s Blu-ray set. Those discs are also included here. The colors still stand out but their more faded than I expected. The ultra-high definition image presentation is as sharp as it can be on this material. You can see some rather prominent pencil lines here. I think that some white benefited the most. During the Christmas special I was drawn to how bright the snowflakes are and there’s just the slightest hint of depth. There’s where you’ll find your most improved moment. The Thanksgiving episode is a bit dark here. Not sure why that is.

You get the exact same audio as the Blu-ray set. The Dolby Digital 5.1 track does exactly what it was originally intended to do. It delivers dialog and some mid-range music. Nothing to write home about, but nothing to distract.

In a bit of a surprise the bonus material, which is the same as the Blu-ray is indeed in 4K. Now that doesn’t mean they look any better. I think we’re talking higher bit rate but same images.

A Christmas Miracle – The Making Of A Charlie Brown Christmas: (15:59) Surviving production team members reminisce about making this, the first of the Peanuts specials. Charles Schulz’s wife offers her take on the production. It was strange to learn that CBS hated it when they saw it and only broadcast it out of contractual obligations, expecting it to disappear forever after. There was also a bit of controversy about Linus delivering verse from the Bible. Schulz insisted it remain. Good for him.

It’s Christmas Again Charlie Brown: This 1992 special never recaptures the heart of the original, but it is a welcome addition here. Charlie Brown is selling Christmas wreaths, and it’s another Christmas play to put on.

The Mayflower Voyagers: An episode of  the This Is America, Charlie Brown series from 1988. The Peanuts gang relive the voyage of the pilgrims and that first winter leading to the first Thanksgiving.

It’s Magic, Charlie Brown: Snoopy performs magic for the gang. Unfortunately, all of his tricks flop, except when he makes Charlie Brown invisible.

We Need A Blockbuster, Charlie Brown: (13:58) The crew talks about the pressure of the third special. The network had pretty much told them that it needed to be another blockbuster or they were going to pull the plug on future Charlie Brown specials. The evolution of the story for The Great Pumpkin is covered. There’s a lot of time on the Snoopy WWI flying ace segment.

Popcorn & Jellybeans – Making A Thanksgiving Classic: (12:27) Voice cast join the other surviving crew members along with both Charles Schulz’s wife and son make this an entertaining and endearing special. Again, the story and development are covered. The Thanksgiving special was the first Charlie Brown cartoon that did not adapt from material in the strip.

They say you can’t go home again, and more times than not, I’ve found that to be quite true. There are some notable exceptions, however. The Peanuts specials are certainly that. It seems that no matter how old I am these features make me feel like a kid again. It’s one of those rare moments when you really can capture the spirit of the moment, even if that moment was originally felt in an 8 year old kid, 50 years ago. If you have been known to experience the same thing when you encounter one of these classics, then “behold, for I bring you tidings of great joy”.

Gino Sassani is a member of the Southeastern Film Critic's Association (SEFCA). He is a film and television critic based in Tampa, Florida. He's also the Senior Editor here at Upcomingdiscs. Gino started reviewing films in the early 1990's as a segment of his local television show Focus. He's an award-winning recording artist for Omega Records. Gino is currently working on his 8th album Merchants & Mercenaries. Gino took over Upcomingdiscs Dec 1, 2008. He works out of a home theater he calls The Reel World. Favorite films: The Godfather, The Godfather Part II, The Body Snatcher (Val Lewton film with Karloff and Lugosi, not the pod people film), Unforgiven, Gladiator, The Lion King, Jaws, Son Of Frankenstein, The Good, The Bad And The Ugly, and Monsters, Inc.
The Survivalist (Blu-ray) Marshall (2017)