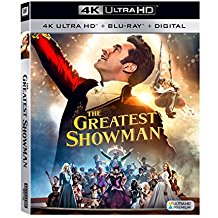 “Everyone has an act.”

One man’s determination to rise from rags to riches helps find a place for the unwanted few. His strong desire to become someone special and with the ability to convince others to believe in his dream, P.T. Barnum creates history and the circus.

The son of a tailor, Phineas Taylor Barnum (Hugh Jackman / Ellis Rubin), knew what it was like to be poor. When his father took any opportunity to make money to support his family, Phineas would go to help him. During this time Phineas meets Charity Hallett (Michelle Williams / Skylar Dunn), a daughter from a wealthy family. Her father was determined to have his daughter become part of society, so he tried to keep them separate.

Years later, Phineas returns to win Charity’s heart, and he finally marries her in 1829. Together they set out to make a life for themselves. After having two daughters, Caroline (Austyn Johnson) and Helen (Cameron Seely), and losing his job, Barnum took a chance on an old building to open as a museum.

With poor sales, the business began to falter. Needing to make money to pay back the bank and save his building and business, Phineas found his future. He discovered what society called “freaks” and presented them in front of his show for all to see. Performers such as Tom Thumb (Sam Humphrey), the smallest man on record, Lettie Lutz (Keala Settle), the bearded fat lady, Anne and W.D. Wheeler (Zendaya / Yehya Abdul-Mateen II), trapeze artists and twin brother and sister, and many more.

Presenting these wonders to New York saved the business and eventually became what he called a circus. With help from an investor and partner, Phillip Carlyle (Zac Efron) a playwright and producer, together they took the world by fire. Barnum’s amazing presentation helped him to become the greatest showman for all to see, and by presenting these unique individuals, he amazed all his patrons.

Director Michael Gracey creates one of the most spectacular musicals ever to dawn on the silver screen. He uses modern music to help tell the story and build the emotion throughout the film. Michael also puts together a spectacular historical and most accurate story that tells of P.T. Barnum’s rise to stardom and the beginning of America’s first circus.

The Greatest Showman is presented in an aspect ratio of 2.40:1. The ultra-high-definition 2160p image is arrived at by an HEVC codec with an average bitrate of 65 mbps. This ultra-high-definition image presentation is as impressive as it gets. The lighting on this film is nothing short of brilliant, and you get all the nuances of those choices thanks to a strong level of contrast and detail thanks to HDR. Light pierces from overhead spots or adds subtle warmth from the period footlights. The result is an amazing atmosphere. Colors pop. This is a colorful spectacle that reveals amazing reds. Costumes deliver nice colors with interesting textures. Black levels are completely black with layers upon layers of nice shadow definition. If the image were any sharper, you would cut yourself.

The Dolby Atmos presentation defaults to a lively 7.1 track. Of course, it’s the music that dominates this dynamic audio presentation. I guess you should have strong expectations here. But it’s an entire audio world that you get. Surrounds add depth instead of mere ear candy. Subs fill the range of the music and add some punch to the vocals. Dialog finds its place. That’s actually the real strength here. The audio design finds space for every little moment to shine. It’s not about volume, but about careful attention to what each particular sound requires to come through an aggressive mix.

The Family Behind The Greatest Showman: (14:05) This is a somewhat short overview of the film. The story of how much time and resources the cast and crew committed before actually getting a studio green light is virtually unheard of today. Cast and crew share their personal connection to the film.

The Songs: (1:10:07) There is a segment for each song in the film. You can use the handy play-all to watch this as one feature-length piece. There’s a lot of detail here about how each song went from creation to finished product. The two writers spend perhaps a little too much time explaining the details of the composition. I tend toward the “let the song say as much of this as it can” school of songwriting. You certainly won’t find yourself short on details here.

The Spectacle: (32:12) There are five segments here with another handy play-all option. They cover character, choreography, cinematography, production design, and score. Here’s your chance to learn about all of the other wonderful elements outside of the songs. Explore concept art and rehearsal footage as you get an intimate look at the film’s various departments of production.

There is a sing-along mode where you get the lyrics during the musical numbers. There is also a feature that allows you to access any particular song directly, which also includes a sing-along option.

This historical view of P.T. Barnum’s life is told as a musical story that is placed into the forefront of the audience. Just like Barnum was the greatest showman, the film is presented like it is a show of its own.

John Delia has been on all sides of the movie business from publicity, writing for publications and on line blogs, script writing, to film making. Writer, critic, film editor he has worked as a film critic on this second go around for 14 years. He earned his Bachelor’s degree at the college of Journalism and Communications at the University of Florida in Gainesville, Florida. John is an active member of the Southeastern Film Critics Association (SEFCA) . Favorite Films: Lord of the Rings/Hobbit trilogies, The Godfather trilogy, the Indiana Jones trilogy (I didn't like the 4th), The Avengers and for TV it's Game of Thrones. As for animation it's a tie between anything Pixar and everything Hayao Miyazaki.
13 Reasons Why: Season One Braven (Blu-ray)