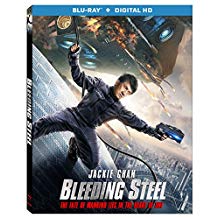 “Who do you think you are, Jackie Chan?!”
I’m going to do my very best to describe how insane this movie is, but it still might not be enough. I want to try and be fair because there aren’t many people who have worked harder to entertain audiences than Jackie Chan. The 64-year-old martial arts legend has more than 100 acting credits to his name in a career that has spanned well over 50 years. Naturally, there are bound to be some turkeys along the way. Unfortunately, Bleeding Steel — an obnoxiously incoherent sci-fi departure for the action star — firmly (and gloriously) falls into the turkey category.

Chan stars as Lin, a Hong Kong special agent with an ailing daughter who is in critical condition. Lin is rushing to the hospital to be by her side when he gets an urgent work call about a witness that needs to be protected. The witness is Dr. James, a geneticist who has been working on creating a mechanical heart(!) and bioengineered blood to create super soldiers. Lin chooses duty over his daughter and rushes to protect Dr. James just in time to be ambushed by a deranged, mech-enhanced villain named…Andre (Callan Mulvey), who looks like Darth Vader without his helmet on. Lin and his team face off against Andre’s stormtrooper-sequel army, Dr. James gets caught in the crossfire, and half a dozen explosions later we finally get the Bleeding Edge title card. (Yes, everything I’ve just described happens in the first 15 minutes!)

“I’ve never seen anything like this before…ther’s someone else’s soul inside you.”

The action flashes forward 13 years. (We know this, not because of a helpful title card, but because Lin mentions it’s been 13 years since his face off with Andre.) A new book called “Bleeding Steel” has become a sensation. The book is about a girl with a mechanical heart, which draws the attention of an ailing Andre and his right hand woman. (Aussie actress Tess Haubrich is simply credited as “Woman in Black”…but at least she gets to rock a cape!) The Woman in Black sets about finding the girl in the book, who is named Nancy (Nanan Ou-Yang). Nancy is also being tracked by a goofy hacker named Leeson (Show Lo) and by Lin, who has a personal interest in the young girl’s safety.

Simply put, this movie is a complete and utter mess. The movie’s frantic, confusing opening act feels like the movie’s conclusion. (Um, why are there knockoff black stormtroopers…and why are they led by Death from Bill and Ted’s Bogus Journey?) I haven’t even mentioned the part where we are introduced to Leeson when he goes undercover as a female prostitute in order to get close to the author of “Bleeding Steel” or that Andre’s lair is a flying laboratory that resembles a spacecraft. Or how about the fact that Nancy visits a witch in order to decipher nightmares she’s been having about a former life she doesn’t remember. In case you drifted away, allow me to repeat this: there is a witch in this movie!

The director here is Leo Zhang, who brings an aggressively frantic style to the film. It’s rare that any single shot in this movie lasts more than two seconds, and the constant cutting is both exhausting and unpleasant. (Especially when you consider the movie also clocks in at a bloated 110 minutes.) Honestly, Zhang’s ADD direction is the worst part of this film. (Although the movie’s nonsensical script — which Zhang co-wrote with Erica Xia-Hou and Siwei Cui — comes in at a solid second place.)

If the movie weren’t literally so hard to watch, I could honestly admire how crazy it is. Way too many action movies take themselves far too seriously these days, and Bleeding Steel harkens back to high concepts of the ’80s and ’90s. You also expect a certain level of goofiness from a Jackie Chan film, who typically mixes slapstick with his stuntwork (which he still insists on doing himself).

Chan manages to sneak in tiny bursts of wit and creativity into Bleeding Steel. The standout sequence is a showdown inside (and on top of) the Sydney Opera House; Bleeding  Steel is the most expensive Chinese movie ever to be filmed in Australia. The problem is even the movie’s inherent goofiness — largely personified by Lo’s irritating performance as Leeson — is overshadowed by how seriously the ridiculous story is treated. Mulvey plays things way too straight as the bad guy…someone should’ve held a mirror up to him so he could see how absurd he looked and adjust his performance accordingly. (Also, did I mention the villain’s name is “Andre”?) Meanwhile, Ou-Yang is flat-out bad Nancy, a character that unfortunately drives much of the story. Instead, I wish we’d gotten more of Erica Xia-Hou, a former law enforcement colleague of Lin’s whom he reconnects with.

But if you really want to know how much of a charmless experience Bleeding Steel ends up being, consider this: we don’t even get the signature bloopers that always pop up at the end of every Jackie Chan film. I guess the unintended statement there is that the entire movie is one big blooper.

Bleeding Steel is presented in an aspect ratio of 2.40:1. The 1080p image is arrived at with an AVC MPEG-4 codec at an average of 37 mbps. According to the description on the movie’s Blu-ray case, Bleeding Steel seeks to channel “1980s techno sci-fi thrillers,” which led me to expect a chillier palette. Instead, this image is surprisingly warm and sunny. (Although maybe it’s not that surprising, considering the movie was filmed in Australia.) Overall, this is a slick presentation with impressively inky black levels and exceedingly vibrant colors. (The building where the witch’s lair is located is inexplicably covered in bright graffiti.) The color blue, in particular, jumps off the screen when we see the waters of Sydney Harbor. In fact, the presentation is often too slick and sharp for its own good, since it accentuates some of the shoddy visual and makeup effects on display. (Each explosion — and boy is there an abundance of explosions here — looks phonier than the one before.)

The DTS-HD Master Audio 5.1 track is largely in Mandarin with a decent helping of English mixed in. (The English dialogue is so painful to listen to, I actually wish the entire movie had just been in Chinese so I couldn’t understand it.) But while the dialogue is an obvious lowlight of this track — and of the film as a whole — this is otherwise as lively and bombasic a sonic presentation as you could ever hope for from a dumb action flick. The track, like the movie itself, is miles over the top. Every dramatic thunderclap from the opening sequence — along with the aforementioned explosions — gets some nice support from the subs, which rumble more than they explode. It’s a good thing too since there’s plenty of activity across all channels, including excellent directionality with gunshots, richocheting laser blasts inside a vault, and cars zooming in and out of traffic.

I’m honestly almost tempted to tell you to check out this movie, just so you can really understand how crazy it is. But ultimately the bad far outweighs the (so bad it’s) good here. This is recommended for Jackie Chan completists and people who enjoy horrible, nonsensical dialogue. (It seems like the script was written in Mandarin and then someone put it through Google translate.) There are even a couple of spots where characters reference Jackie Chan himself. I think it’s the movie’s attempt to be self-referential, but it just doesn’t make any sense.

None of this makes any sense.