Posted in: Disc Reviews by Gino Sassani on September 26th, 2018 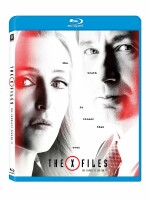 “Is there life out there? Good heavens! To doubt it is a failure of more than the imagination. It is a failure to recognize the limits of our own stupidity. The nascency of our science. The rudiment of our tools. We listen. We search. We hope for a sign, as if our eyes and ears are good enough, our brains large enough, our egos small enough.”

By the time The X-Files had reached its seventh season, the two stars of the show were feeling the stress of doing over 20 episodes of the series every year. In the eighth season David Duchovny was going MIA, and Gillian Anderson’s Scully character had a new partner in Robert Patrick’s Agent Doggett. They used Duchovny’s absence as a new story arc in the overall mythology, and the story became the search for Mulder. It provided an interesting chance for Anderson to take even more center stage, and she actually handled the changes pretty well. But even Anderson was getting tired, and the ninth and final season would feature Anderson in only a limited role as Doggett and his new partner Agent Reyes, played by Annabeth Gish, became the new agents on The X-Files. The missing Mulder storyline began to get stale, and the show limped through that final season. But fans hoped that Mulder and Scully would find a way to reunite and bring back the core team that really was the heart of The X-Files.

That wish came true rather quickly with 1998’s The X-Files movie. It wasn’t the kind of film fans had hoped for, and the wait continued for another decade until the 2008 X-Files: I Want To Believe. That film didn’t inspire the fans at all. It seemed as though the show was finally dead. I think that by this point everyone concerned with the franchise understood that the film format didn’t present the material at its best. As the years went by there were always rumors and hoaxes about the franchise’s fate. Finally in 2016 hope was again revived when it was announced that in January of 2016 The X-Files would return to the place it belonged. The series would return as a limited-run series. Originally there were to be seven episodes. It seemed like the perfect compromise. Fox had some success with this format with the 24 franchise. It allowed the return of the two stars who could do a limited run without the exhausting schedule of a full season and yet allow enough time for the show to work its original magic. The actual run ended up at six. And as much as I have looked forward to this day, I was overall disappointed with the results.

With the arrival of 10 episodes for an “11th” season, the results were quite a bit better. The team felt more natural, and these episodes play out much more like those of a classic season. The first and last episodes are pretty much mythology shows and by far the weakest of the season. The mythology story here dealt with Scully’s child, William, who has grown up now. He’s had a tough life, and he has powers. Is this X-Files or X-Men, anyway? Scully is having visions, and things are going to get bad if William isn’t found. That search remains in the background of the middle eight episodes and is resolved rather badly in what could be the series finale. More on that later.

It’s those middle eight episodes that makes this release a must-have, particularly for the fans. There are some notable returns. Dean Haglund returns as Lone Gunmen member Langly. It turns out that he had himself downloaded for an experiment to extend life infinitely. He appears to Mulder and Scully on their phones asking if he’s alive. Ht turns out volunteers are being used as cyber-slaves while living in a simulation they don’t know isn’t real. Langly figures it out and pleads with his FBI pals to shut it down. There’s very much a Matrix vibe going on here.

Mitch Pileggi returns pretty much full time as Skinner this season. We go back to Vietnam in the 1960’s and meet a younger version as he tries to help out a friend. Mulder and Scully discover that it was his helping them all these years that has kept him from advancing. That episode also features a return from Gray’s Anatomy chief James Pickens, Jr. as Director Kersh. William B. Davies has a lot to do as CSM this season, and his story is the more compelling parts of the mythology material. Chris Owens brings back Jeremy Spender.

“Where are they taking Reggie?”

One of the best X-Files episodes ever is played pretty much for laughs. The Lost Art Of Forehead Sweat puts us in a kind of alternate universe where everyone’s memories have been tainted by something called the Mandela Effect. A character named Reggie Something comes to Mulder for help. He claims he is being erased from reality. He was a partner to Mulder and Scully all of these years, and we get to see some scenes from classic episodes with Reggie now in the scene. Brian Huskey is pretty wild as the disappearing Reggie. The episode also brings back one of my all-time favorite television actors. Stuart Margolin was the beloved rascal Angel for years on The Rockford Files. He returns to television to play Dr. They, who is a Satan-like presence that is manipulated memories. He’s the guy you’re talking about when you site “They always …” You won’t recognize him under the age and makeup, but when he talks Margolin reveals himself. The old quirks and facial tics are there, and it was worth the season for me just to see him again. There’s a bit of a Twilight Zone homage to the entire episode, and it’s completely played for laughs.

There’s a wonderful play on the lasts names of Mulder and Scully when a foursome of twins (yeah, that’s what I said) play a deadly game of hangman. The fact that the middle of the names are the same allows a nice little twist when they target them.

“It’s a shame to waste a perfectly good pancreas.”

Sometimes the season gets too experimental. There is an episode with only a few lines of dialog. Mulder and Scully eat at a robotic restaurant and spend the night terrorized by their electronic devices from cell phones to driverless cars. It appears even machines expect a tip. This works for a while, but it really doesn’t sustain for the 45 minutes. A great idea that just had too much time to develop. On the other hand there’s a classic-style episode where a curse rages through a town targeting the children. The face of this curse is Mr. Chuckleteeth, who is a very creepy cross between Chucky and Pennywise from It. It’s a sensitive episode because children are the targets, but all of the old X-Files elements come out to play with Mr. Chuckleteeth. Finally, there’s a pretty gory episode that also ranks as a superior outing. A professor has learned the secret to immortality, and it involves a cult of willing members to feed their organs to the couple running things so that they can remain young. One way they survive is to graft themselves on a volunteer feeding off their blood and bodies. It’s another creepy but really solid episode.

It was smart to grow from six episodes to ten. I felt like this was a pretty solid season and worth having in your collection.

Each episode is presented in its original broadcast aspect ratio of 1.78:1. The 1080p image is arrived at with an AVC MPEG-4 codec. This high-definition image presentation makes one thing perfectly clear. Technology has come a long way since the series ran in the 1990’s. CGI technology on a television budget was almost nonexistent in the 1990’s. Today it’s as common as you please. The image is certainly crisper and sharper than the show has ever been. Honestly, the production here is better than the films. Details bring a brand-new element to the mix. Black levels are quite nicely rendered. Perhaps the sharp production jump makes this feel somewhat different from the series. Watch them back to back and you are in for a shock. In episode three the brilliant green foliage is remarkable.

The DTS-HD Master Audio 5.1 is pretty much there to serve the dialog and that wonderful Mark Snow music. The atmosphere is the one thing that remains constant over the years.

Deleted Scenes: (5:21) There are only two for the entire season. There is a play-all.

This looks like it’s the end of the series. The finale will be a weak series finale, but that might just be how it goes. Anderson has made it clear that she will not return, and I think I believe her. At first Chris Carter indicated he did not see a way to continue without her. After this season he has backed off that remark big time. Now he tells us there are still too many stories to tell. Time will tell, but it’s hard for me to believe this franchise is truly finished. Next year Disney will own the property, and it will be interesting to see what they might have in mind. This is one of those new properties that makes a strong case for Disney to be willing to venture into areas that might not be so Mickey Mouse safe. Let’s face it. “The truth is still out there.”

Gino Sassani is a member of the Southeastern Film Critic's Association (SEFCA). He is a film and television critic based in Tampa, Florida. He's also the Senior Editor here at Upcomingdiscs. Gino started reviewing films in the early 1990's as a segment of his local television show Focus. He's an award-winning recording artist for Omega Records. Gino is currently working on his 8th album Merchants & Mercenaries. Gino took over Upcomingdiscs Dec 1, 2008. He works out of a home theater he calls The Reel World. Favorite films: The Godfather, The Godfather Part II, The Body Snatcher (Val Lewton film with Karloff and Lugosi, not the pod people film), Unforgiven, Gladiator, The Lion King, Jaws, Son Of Frankenstein, The Good, The Bad And The Ugly, and Monsters, Inc.
Macgyver: Season 2 Rock & Roll Hall of Fame: In Concert — Encore (Blu-ray)