“31 Nights Of Terror” Sleep No More

Posted in: No Huddle by Brent Lorentson on October 6th, 2018 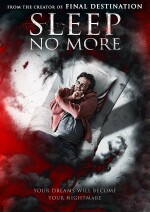 It seems the 80’s is the go-to gimmick nowadays. With the success of Stranger Things and It, I can’t really blame the studios for cranking out the films set in this time period.  Personally my favorite film to do this would be Summer of 84. For me it’s been the film that has best captured what it was like to grow up during that time period, but Sleep No More is definitely a film that I’m glad has climbed aboard the 80’s bandwagon.  Personally what grabbed me was how the DVD boasts that it is from the creator of Final Destination.  While the sequels fell more into the guilty pleasure category for me, the first film holds up and is great, so of course I’m curious to see what he has cooked up for Sleep No More.

A group of graduate students are working on a study to see what happens to the body after it has gone more than 200 hours without sleep.  Their theory is that once you reach this threshold you will never have to sleep again. Unfortunately their first subject that they used for the study snapped and ends up killing themselves in a rather gruesome manner.  Still confident in their research, they plan on continuing their study, only this time using themselves as the test subject.  It’s a cool little setup for a horror film; one you know can’t possibly end well for those deciding to take part in this experiment.  It’s like Flatliners meets an episode of The X-Files called “Sleepless”.  In the episode it’s soldiers being put into a sleep study that of course has nasty consequences.  So how does the film come out?

What works is I like how the film keeps it simple. Keeping the students mostly confined to one area and keeping the cast small also gives us time to get to know them all. Joe (Keli Price) leads the group and is able carry the film along even when it starts to dip its toes into slightly absurd territory, but it’s not just Price that is good, it is the cast that surrounds him. There is Holly (Christine Dwyer), Frannie (Brea Grant), Dale (Stephen Ellis), and Dr. Whatley (Yasmine Aker) who is overseeing the experiment.  As the experiment progresses, its Holly’s and Dale’s reactions that kept the momentum going for this film and took this in a very dark direction.  As the group begins to hallucinate, they all seem to agree that there is a shadow-like entity that seems to be stalking them and putting them into dire circumstances.

The film has a couple solid scenes; personally my favorite has Joe and Dale exploring the halls of the laboratory as they are attempting to hunt down what has been stalking them.  It works because it keeps things simple, and the scene is carried through performance, editing, and camera movement.  More moments like this and I feel this could have been a runaway success, because there is genuine tension built in this scene.  Another one of my favorite moments involves Dale and Holly, as he is looking after her following an attack. I won’t say much more, but this is one of the scenes that definitely embraces being a horror film.

If I had any major complaint, it’s the use of CGI for the shadow figures. It just didn’t seem to blend well into the environments and was obviously a CGI creation that it removed me from the moment, despite how intense the situation may have been.  Had there been a little less, I feel the impact could have been stronger, because the characters and the story carry enough weight to keep a viewer interested.

One of the charms of the film is the sound track and its inclusion of numerous hits from the 80’s with the inclusion of Duran Duran and Bananarama.  With cleaner CGI work I feel this could have played well in theaters, because this is actually a fun little movie. It’s also something where I feel there is plenty of potential for sequels down the road if there turns out to be a demand for them.

Director Phillip Guzman is showing that he is a capable horror director; it’s simply a matter of getting the right script, and before he gets that breakout film.  Hopefully this film is only a stepping stone towards having him improve as a filmmaker. Sleep No More is a good film, but it could have been great.  While it won’t give you nightmares, it’s definitely a title worth checking out during this Halloween season.

Brent Lorentson is a horror writer and film critic based out of Tampa, Florida. With a BA in Digital Film, he co-wrote and co-directed Scavenger Hunt. His short stories have appeared in various horror anthologies. In 2019 his short script Fertile Blood will be a part of the anthology horror film Slumber Party. He is currently working on his first novel A Dark and Secret Place set to be released in late 2019. Favorite Films: Taxi Driver, Fight Club, I Saw the Devil, The Wild Bunch, Dawn of the Dead, A Clockwork Orange, Pulp Fiction, Heathers, The Monster Squad, and High Fidelity.
Big Fish and Begonia (Blu-Ray) “31 Nights Of Terror” Venom