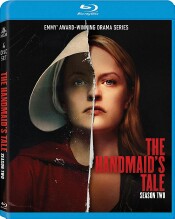 “I’m sorry there is so much pain in this story. I’m sorry it’s in fragments, like a body caught in crossfire, pulled apart by force, but there is nothing I can do to change it.”

To say there is pain in The Handmaid’s Tale might be the biggest understatement of 2018. The series is set in a dystopian near-future in which women — even the ones who are supposedly part of the ruling class — are enslaved and tortured in a variety of heinous ways. Handmaid’s Tale immediately became Hulu’s flagship show and picked up an Emmy for Best Drama Series last year. So expectations were high for this second season, which too often proves to be torturous for viewers as well.

“God send me an obedient woman.”

The Handmaid’s Tale is based on Canadian writer Margaret Atwood’s 1985 novel of the same name. Sometime in the not-so-distant future, the world is in chaos after environmental pollution and sexually transmitted diseases result in a catastrophic decline in human fertility rates. In the U.S., the result was a Second Civil War, which led to the establishment of a totalitarian, Christian fundamentalist government known as Gilead. Life is especially dire for women: they are not allowed to own property, work, handle money, or read.

The series centers on June (Elisabeth Moss), who was separated from husband Luke (O.T. Fagbenle) and their young daughter Hannah as they scrambled for the Canadian border. June is re-christened as Offred and forced to serve as a Handmaid, women who live in an adopted family’s home and are subjected to ritualized rape in order to try and bear children.

Season 2 opens with a group of Handmaids facing the consequences for their brazen act of defiance at the end of the first season. It is quickly revealed that Offred is pregnant, although she does not reveal that the baby’s father isn’t Commander Fred Waterford (Joseph Fiennes). The baby is the result of her secret relationship with Nick (Max Minghella), Commander Waterford’s driver and an Eye, a spy for Gilead. Offred’s status as a pregnant woman buys her some leeway with the violently maternal Aunt Lydia (Ann Dowd), who is in charge of the Handmaids. But the pregnancy also creates new friction with Serena Waterford (Yvonne Strahovski), who believes it is her divine right to raise Offred’s baby as her own…and potentially erase Offred/June from its existence.

As you can see, things are inherently bleak in Handmaid’s land. The first season of the show pretty much covered the entirety of Atwood’s novel from a plot standpoint. That means show creator Bruce Miller and his team had the liberty to take the story in bold and unexpected places. And while Handmaid’s Tale remains a devastatingly powerful, impeccably crafted drama with top-tier performances, the results are mixed.

The first episode (“June”) is essentially one prolonged torture sequence as Offred and her fellow Handmaids are shuttled from one location to the next in order to endure some fresh new hell. But that episode actually seems like a picnic compared to Ep. 2/“Unwomen,” which introduces us to the toxic Colonies where fallen and disreputable Handmaids like Emily (Alexis Bledel) wind up as slave labor. The third episode (“Baggage”) ends up being emblematic of the season’s biggest problem: the repeated teases of Offred escaping the Waterfords and fleeing Gilead. It’s one thing to depict the inhuman treatment that women in this world endure when their government stops looking out for them, but with this second season it felt like Miller and Co. were delighting just as much in torturing and teasing the audience with the possibility of Offred’s escape…only to yank the football away at the last moment. (The most egregious example comes during the season finale/“The Word.”)

So why is the show worth watching? Well, I happen to think Elisabeth Moss is the best actress working on television right now, and this role continues to be a showcase for her quiet ferocity. The actress’s range is on display in everything from Ep. 5/“Seeds” (a dead-eyed Offred seemingly gives up and loses the will to live) and Ep. 10/“The Last Ceremony” (Offred endures her most brutal on-screen ordeal at the hands of the Waterfords). Speaking of the Waterfords, I really felt this was a standout season for Strahovski as Serena dishes it out (her continued psychological battle with Offred over their soon-to-arrive baby) and takes it (Serena endures harsh punishment from Fred this year…more than once.) There’s even a fleeting moment in the middle of the season where Offred and Serena join forces and share the thrill of their former lives.

In addition to the show’s existing cast, season 2 attracted well-known guest stars like Marisa Tomei (the Oscar winner is oddly wasted in her brief appearance), Cherry Jones (as June’s activist mother), and Bradley Whitford (as the quirky “architect of Gilead’s economy). Still, the person who made the biggest impression on me was the lesser-known Sydney Sweeney, who plays Eden, the child bride that Nick is forced to marry when his feelings for Offred/June become apparent.

Season 2 also features some strong flashbacks depicting the events that led to Gilead being established. They are effectively told through the main characters’ eyes, but these flashbacks — by definition — prevent the show from propelling its story forward.

The Handmaid’s Tale: Season Two is presented in its original aspect ratio of 1.78:1. The 1080p image is arrived at with an AVC MPEG-4 codec at an average of 20 mbps. Like other dystopian stories, Handmaid’s Tale is characterized by a miserable gray palette; it looks like the nation’s lifeblood and color has been drained out of it. Season 2 introduces an even bleaker setting by taking us to the Colonies, which allows this disc to show off sickeningly fine detail (courtesy of the toxic living quarters and working conditions) and fantastically inky black levels. The separation we get during darkened scenes is crucial for the sake of cohesion and clarity during June’s (many) escape attempts. That being said, there are still frequent and conspicuous pops of color, most notably the instantly iconic red that the Handmaids are forced to wear. The Wives in Gilead are forced to wear muted blues, but the same color jumps off the screen whenever the camera focuses on Elisabeth Moss or Alexis Bledel’s piercing blue eyes. Overall this is another fantastic visual presentation from Fox that succeeds in transporting the viewers into June’s nightmare.

The DTS-HD Master Audio 5.1 track gets even more chances to show off during the second season, which opens with the prolonged and torturous herding of Handmaids at Fenway Park. (The season also features a very short plane ride and an explosive conclusion to Ep. 6/”First Blood.”) This sonic presentation goes beyond the “dialogue in the front/ambient noise in the rear speakers” method of immersing us in this world. Whether June finds herself trapped in a large empty home or at the abandoned Boston Globe offices waiting for the right time to escape, the outside world can faintly be heard throughout the entire surround sound field. The track also takes the time to separate the various parts in Adam Taylor’s evocative score. So while Handmaid’s Tale is largely a dialogue-driven drama, this is a lively presentation that makes June/Offred’s very small and contained existence feel impossibly large and foreboding.

All of the bonus material is presented in HD and are available on Disc 4.

Season Two — Off Book: (11:35) Margaret Atwood fans have been waiting more than 30 years to see what happens after her novel’s cliffhanger conclusion, which was also how the first season of the show ended. (Those of us watching on Hulu only had to wait a little over a year for some answers.) This featurette covers how the series, with Atwood’s input, moves the story forward but also uses frequent flashbacks to depict critical moments that led to the creation of Gilead. (And potentially fill in some emotional gaps in the novel.) This is a pretty good overview of the show’s second season.

Dressing Dystopia: (6:54) Costume designer Ane Crabtree takes us through the process of creating the striking style of Gilead, which is meant to be both powerful and insidious. (The idea is that the remnants of the old U.S. were slowly stripped away as the look of Gilead steadily took over.) This is a really interesting look at the different social classes of Gilead and the subtle ways visual storytelling affect viewers emotionally.

The Handmaid’s Tale: Season Two features all 13 episodes on four discs. The 13 episodes represented an increase from the first season’s 10 episodes, which accounts for this second season feeling a bit baggier and repetitive.

The most amazing thing about The Handmaid’s Tale is that this harrowing, suddenly timely cautionary tale about what happens when society falls asleep at the wheel is based on a story that was published more than 30 years ago. Atwood recently announced a sequel to her book, so it will be interesting how her book aligns with the story on screen going forward.