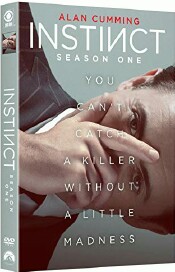 “My name is Dylan Reinhart. Not long ago, I was an operative in the CIA known as Agent Reinhart. When I left the Agency and started teaching, I became Professor Reinhart. I wrote a book about abnormal behavior and criminals which was so successful a serial killer used it as clues for his murders. That’s when the NYPD reached out to me to help catch him, which I did. So they hired me and I became consultant Reinhart. So now I’m working with this woman, Detective Lizzie Needham of the homicide division, catching killers. Looks like I need a new name…Professor Psychopath.”

Dr. Reinhart (Cumming) is teaching a college class on abnormal psychology when he’s visited by NYPD homicide Detective Lizzie Needham (Novakovic). A killer appears to be using his one successful book as a framework for his murders. Of course, they want the author to help solve the crime. After that crime is solved, he finds he rather likes the excitement and attention the work gave him, so he signs on to work with her full time. He splits his time with his class and the police force. He also tries to support his husband Andy (Ings), who gave up a law career in order to own a bar. The relationship provides some much-needed grounding for the character. Reinhart also keeps in contact with his old CIA partner Julian, played by Naveen Andrews. He’s the most compelling member of the cast and could be considered the real brains in the group. He uses those CIA resources to help Reinhart out in the hopes he might come back with him to the CIA. Of course, Needham gets involved with this little secret, and the two of them get into some trouble trying to explain where their intel comes from. The chemistry between Andrews and Cumming is the best in the series. That’s when the show becomes the most compelling.

Needham was last partnered with a guy she was engaged to, and he was killed on the job. She’s a bit damaged from the event and hasn’t been able to find a good working partnership on the force. She’s lucky that her boss is Lt. Jasmine Gooden, played by Boston Public stand-out Sharon Leal. Gooden sees this consultant partnership as a way to get her friend back on her feet and back into the game.

Whoopi Goldberg has a recurring role as Reinhart’s publishing agent. She’s trying to get him to write a book about his CIA experiences, and that also is a road to trouble. Hopefully, Goldberg likes the way her co-stars think. We know how she treats folks who disagree with her. We don’t need her telling anyone to “get out of her F@#$^&ing building.”

CBS is trying to have their cake and eat it too here. Part of the allure of these consultant cop shows is that you have a character with a background or personality that clashes with the traditional methods of police work. That’s a bit of a problem with Reinhart. He’s is supposed to have both an academic past as well as a top agent in the CIA. He was apparently so good that his old partner keeps trying to get him to come back. That’s nice and all, but they also try to play Reinhart as this somewhat naive and socially inept character, because that’s what audiences demand from this kind of character. They all have their issues with normal society, but Reinhart’s are so obviously contrived. No one this off would have thrived in the CIA. He loves attention far too much to have survived a world of being unnoticed. He is played far too innocently to have been a part of that world. It’s a stretch, and it’s the fatal flaw in the show. Cumming isn’t near as likeable or charming as Nathan Fillion or Simon Baker. There’s no real chemistry between Cumming and Novakovic. I don’t feel like they’re really connecting on the kind of level a show like this requires. And don’t get me started on her name. Whoever came up with Needham wasn’t at all conscience of sounds and how it would constantly sound like Need Him when used throughout the series. Reinhart is gay and in a stable relationship, so there isn’t the romantic tension in this pairing. I actually like that part. I think shows end up hurting these investigation teams when they start the flirting and eventual bedding. Knowing that this isn’t going to be a part of this team is great. But they waste this unique slate by having her sleep with Julian. The show’s best asset is replaced with something more conventional and boring. The show also had the unfortunate problem of just 13 episodes to try to create his chemistry. Many shows do well in that number of episodes. Here there’s too much development necessary to get us on board in such a short amount of time.

The episodes are pretty much standalone. There are a couple of threads that hang through the season and mostly involve Reinhart’s CIA past and the case where Needham’s partner was killed in action. There is more than a little hint of danger waiting around the corner for the couple, and we’ll have to see where it all goes. After just 13 episodes, no one has hit their stride just yet. I suspect after next year things will have to have improved or this show will quickly get lost in the avalanche of scripted television out there. So far it mostly just reminds me of the shows that have come and gone that did this police consultant thing so much better. Shows like The Mentalist, Castle, Bones, and Monk. “You can’t live in the past, but you sure can miss it.”

Gino Sassani is a member of the Southeastern Film Critic's Association (SEFCA). He is a film and television critic based in Tampa, Florida. He's also the Senior Editor here at Upcomingdiscs. Gino started reviewing films in the early 1990's as a segment of his local television show Focus. He's an award-winning recording artist for Omega Records. Gino is currently working on his 8th album Merchants & Mercenaries. Gino took over Upcomingdiscs Dec 1, 2008. He works out of a home theater he calls The Reel World. Favorite films: The Godfather, The Godfather Part II, The Body Snatcher (Val Lewton film with Karloff and Lugosi, not the pod people film), Unforgiven, Gladiator, The Lion King, Jaws, Son Of Frankenstein, The Good, The Bad And The Ugly, and Monsters, Inc.
The Jerk 40th Anniversary Edition (Blu-ray) Yellowstone: Season One (Blu-ray)