Posted in: Disc Reviews by Gino Sassani on January 17th, 2019 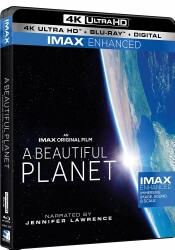 “Our Milky Way Galaxy is just one among billions of galaxies in the universe. In every way an ordinary galaxy. It’s 100,000 light years across. There are hundreds of billions of stars here. Lost inside this huge swarm is one average-sized star. As stars go, it’s quite unremarkable. Nevertheless, it’s the most special place in all the cosmos. Orbiting this star is the only place we know in all the universe to harbor life.”

Of course, that place is Earth, and while we can’t say for certain, it is truly unlikely to be the only place in this vast universe or even this galaxy to contain life. We might one day have to rethink exactly what that term means one day. But for now, Earth is the only place we know that supports life.

In orbit around this oasis in the universe you find the International Space Station, where astronauts spend extended time in space to study the effects of weightlessness on both the human body and mind. It also offers a unique vantage point for this planet of ours. Filmmaker Toni Myers supplied some of the astronauts who have taken up temporary residence in this space station with IMAX cameras and instruction on how to use them. The result of that project is the IMAX presentation of A Beautiful Planet. Narrated by Jennifer Lawrence, the film explores that vantage point in the glorious giant format of IMAX.

The footage comes directly from the astronauts for the most part. There is some CGI to represent distant planets and other astronomical objects. The team makes a point to tell us that these images are based on the numerical data provided by telescopes and the like. They say that makes them not CGI, but of course that’s exactly what it is. There is some nice footage that demonstrates life at the station. We get to see how they do normally mundane tasks like washing their hair or drinking a cup of cappuccino. While this stuff isn’t near as visually stunning, it is just as interesting. We follow a particular crew from launch and arrival at the station until it’s time for them to return to Earth once again.

The spectacular stuff has to be the incredible images of the Earth from orbit. The film points out notable geographic points along the way, while we get to enjoy images that allow us to see entire continents in one frame. As beautiful as all of that might be, the real stunning stuff comes when the station is orbiting the night sides of the planet. The intricate web of lights is the best evidence of humanity’s presence on the globe. The astronauts join in the narration and identify key cities and surface features.

Mill Creek Entertainment looks to be continuing its foray into IMAX titles for the UHD format. It’s a natural fit and one I hope the audiences will reward. There’s a ton of stunning things out there that will truly show off the best from your 4K setups.

A Beautiful Planet is presented in an aspect ratio of 1.78:1. This is not the original IMAX aspect, but it doesn’t show any real signs of distortion here. The ultra-high-definition 2160p  image is arrived at by an HEVC codec with an impressive average bitrate of over 80 mbps. This was not shot on film as is usually still the case in IMAX. The 70mm film would have been an issue in space. Weight is precious on a flight, and loading cameras with film would have created extra clutter and logistic issues for the astronauts. With that said, it’s apparent this is no 2K standard digital shoot. The HDR helps to bring out the wonderful stark contrasts of Earth and atmosphere. An aurora dances wonderfully over the northern extremes of the Earth. Contrast is best on these night-side scenes. The pinpoints and clusters of lights stand sharply against the blackness of space. These are the kinds of detail you get from a larger format and then mastered for a 4K/UHD home release.

The DTS:X track defaults to a nice 7.1 mix. Obviously, the dialog is the center of the audio presentation. They make a rather nice use of surrounds here. Sometimes when the astronauts are talking, they come from the rear speakers only. It’s a pretty good effect and makes this an even more immersive experience than it would have been otherwise. I haven’t gotten a home release that used dialog to this extent in this way before. There are the usual music cues that sit pretty much in the background. There’s not a lot of surround in space, so you shouldn’t expect anything aggressive. That’s likely what motivated the sound engineer to use the surrounds for dialog.

The extras are all on both the UHD and standard Blu-ray copies of the film. All you really get here are three 2-3 minute promos that likely were used to promote the film at IMAX venues.

The film gets a bit preachy for a bit in the middle, and I was hoping that just for once the filmmakers could leave the political agendas at the cutting room floor and allow us to experience these wonders without being made to feel guilty about driving our cars or even using the electricity it takes to watch the film itself. I don’t quite understand why the entertainment industry can’t just let us enjoy a moment without adding political speeches to the mix. Otherwise, this is a breathtaking view of a place few of us will ever have the privilege to see from outside its confines. Seeing it all in IMAX and ultra high definition is worth the time merely for “the effect it has on our eyes”.

Gino Sassani is a member of the Southeastern Film Critic's Association (SEFCA). He is a film and television critic based in Tampa, Florida. He's also the Senior Editor here at Upcomingdiscs. Gino started reviewing films in the early 1990's as a segment of his local television show Focus. He's an award-winning recording artist for Omega Records. Gino is currently working on his 8th album Merchants & Mercenaries. Gino took over Upcomingdiscs Dec 1, 2008. He works out of a home theater he calls The Reel World. Favorite films: The Godfather, The Godfather Part II, The Body Snatcher (Val Lewton film with Karloff and Lugosi, not the pod people film), Unforgiven, Gladiator, The Lion King, Jaws, Son Of Frankenstein, The Good, The Bad And The Ugly, and Monsters, Inc.
Halloween (2018) (UHD Blu-ray) (4K) OddSockEaters