Posted in: Disc Reviews by Gino Sassani on January 23rd, 2019 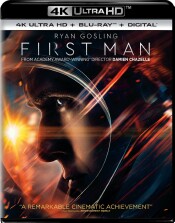 “That’s one small step for (a) man. One giant leap for mankind.”

July 20th, 1969. If you were alive and even somewhat old enough to be aware of your surroundings, you likely still remember that date. There are many such dates in history; unfortunately so many of them revolve around tragic events like 9-ll or the attack on Pearl Harbor. But on that night I was eight years old, and I know exactly where I was. I was watching Walter Cronkite on television as he brought us the first landing on the surface of the moon. Today that’s a bittersweet memory. For an 8-year-old boy it was a promise that has remained unfulfilled. If you had told that 8-year-old who just saw humans walking on the moon that 50 years later we would have gone no further, he would have been dumbfounded. If you told him that not only would we go no further but that we would stop going to the moon in just a few short years, he would have been devastated. I can only imagine what that first man on the moon thought about it all so many years later. The truth is that Neil Armstrong never traded on his celebrity. He kept mostly to himself for the rest of his life, and perhaps the only tragedy larger than our abandonment of the pursuit he risked his life for is that we know so little about the man whose name lives with the likes of Columbus. He’s almost a forgotten hero. That’s why First Man is such an important film that almost lives up to that legacy.

The film catches up with Armstrong (Gosling) during a test flight that goes badly at first. It’s an awkward place to begin Armstrong’s journey. I understand that there’s a point to be made here. These were dangerous men doing dangerous things while they pushed the envelope of flight to its limits. But The Right Stuff already made that point, as have countless other films about the heroic “derring-do” of these flight pioneers. We’re meant to understand how much of their fate wasn’t truly in their own hands. Marvelous point. But, this really isn’t a film about that. This is a film about a man and his own heroic journey. Before long we learn that he has a young daughter who is dying of cancer. That’s where the film should have started. That’s where the journey of this man really starts, and it’s far more insightful than the close call that does start us off. It’s not really a tension-builder, because we know Armstrong survives because we know he has a destiny, so there’s no real peril here. It was an unwise choice to attempt to manufacture it now. It’s the loss of his child that demonstrates for Armstrong and us how much of life is out of our control. It’s the human element that is too often wasted in the film.

The movie touches on all of the milestones that led Armstrong to be in position to make that first giant leap for mankind. But it takes too long to make its point. At almost 2 1/2 hours, it tries the patience of an audience that is eager to see that first historic step. Ryan Gosling’s performance is nothing short of spectacular, but the film’s pace is far too contemplative, and it pushes Gosling’s performance to the limit. Yeah, he’s up to the task, and that makes all of the difference in the world. But it wasn’t necessary. Trimmed to about 100 minutes, this film could have gone from good to great. And there are some truly great moments. Gosling introduces us intimately to the man we never got to know over the decades since the landing. I learned more about Neil Armstrong than I thought possible, and I’m truly grateful for that. Still, I suspect that a tighter film would have had more impact.

Let’s talk about the idiotic controversy over the USA flag planting on the moon. No, we do not see that moment acted out. But it’s simply ridiculous to infer that the filmmakers were making an anti-patriotic or anti-flag inference. There’s a scene that shows the Armstrong family raising an American flag at their home, and the moon flag is shown, albeit from a distance. I don’t understand why folks are making such an issue where none exists. Armstrong’s quiet patriotism is much truer to the man that he was in real life. This is not an anti-America film, and you would be foolish to avoid it because you’ve been misled to believe that it is. The focus is never on any part of the achievement, but on the man himself. In some ways the landing itself is merely a background for Armstrong’s story, and I’m fine with that completely. I honestly wish it had been a more intimate and tighter story.

The production will get at least mentions at this year’s Oscars. It’s a beautiful-looking film with some awesome cinematography. The score is emotional and adds the perfect emotional beats. It’s a nearly flawless production that deserves the attention it will get.

The supporting cast is filled with several great performances. Like you did with The Right Stuff, you get a really nice portrait of both the relationships between these men and the kind of brothers-in-arms mentality that was pervasive during the historic venture. Friday Night Lights’ Kyle Chandler is a particular standout as Deke Slayton, who was one of the mangers of the Gemini and Apollo programs. Corey Stoll gives a somewhat unflattering Buzz Aldrin that does a nice job of mixing a flawed man with the things that earned him his place on the flight. Just like we saw in The Right Stuff, we see the families who often bond over funerals and a nuanced performance by Claire Foy as Armstrong’s wife, Janet. It’s good stuff, but not unlike what the previous film had already given us. Rome’s Ciaran Hinds is another exceptional supporting piece of the giant puzzle and intricate family of characters, but it always falls to Gosling’s Armstrong, because this is, after all, his story.

First Man is presented in an aspect ratio of 2.39:1. The ultra-high-definition 2160p  image is arrived at by an HEVC codec with an average bitrate of 50 mbps. The choice to include the extras on the UHD disc doesn’t help, but either way this isn’t quite the upgrade from the Blu-ray I was hoping to find. The film’s colors are somewhat desaturated to gain the period-piece style. So color isn’t really going to pop. The HDR contribution here can be found mostly in the contrast. The fiery launches and Apollo 3 fire provide those moments of outstanding color and contrast. Shadow definition is somewhat disappointing here. It’s a bit muddy, and I have to assume some of that might be by choice. It’s also an obvious choice that most of the film is shot in low light, even during daylight hours. The aura of blue around the Earth from space provides another rare color attraction. The blue planet also separates itself the most from the Blu-ray with not only the depth of that shiny blue but the details of the planet itself. Part of the style issue is that this was shot on film, but primarily on 16mm, so it was mostly mastered in 2K. Again this is a stylistic choice intended to make the film look more like a documentary from the era.

The Atmos track defaults to a mostly tame 7.1 mix. Dialog is the real powerhouse of the film. Where the audio presentation shines best is in the intimate and claustrophobic aspects of the film which, of course involves that small capsule but the theme carries over to many moments in the film. We’re as much in the character’s head as his true physical space. The score is minimal, and that works quite well for the atmosphere here. One of these intimate moments is when the astronauts are placed in the capsule. There is virtual silence at first. Once the helmets are in place, that frantic breath dominates the audio, while a bit of metal creaking from the gantry and wind are allowed to sneak into the side and rear speakers. It’s actually a rather effective moment. The subs come alive in those launches as the rocket thrusters push against the launching pad to send us all up into space with these pioneering astronauts.

Deleted Scenes: (4:17) There are only two with a play-all option.

Shooting For The Moon: (3:40) The director and writer lead the conversation with plenty of behind-the-scenes footage. The focus here is on the story and character of Armstrong.

Preparing To Launch: (3:39) This focus is very much on Armstrong as a bit of a character study.

Great Leap In One Small Step: (4:31) A look at the ordinary aspects of Armstrong as a family man and typical aspects of his life. His sons offer their thoughts on their father.

Mission Gone Wrong: (2:42) Go behind the scenes of the scene where the lunar landing trainer crashes.

Putting You In The Seat: (7:09) A look at the use of giant LED screens during the shoot instead of using greenscreen and adding elements like Earth and lunar surface.

Astronaut Training: (4:02)  The cast and crew talk about filming on location at real NASA sites where these things actually happened. The actors got to try out the real training equipment, so it was like going to space camp for them.

Recreating The Moon Landing: (6:01) Go behind the scenes as they film the action on the surface of the moon. The actual audio from the transmissions were played on the stage while they shot the scene to provide some inspiration to the cast and crew. We also get to see how a quarry was turned into the moon’s surface.

I enjoyed the film but can’t help the fact that I expected and absolutely wanted it to be so much more. Certainly, so much of that hails back to that 8-year-old boy in 1969 who simply couldn’t believe that he was seeing what he was seeing. Of course, my grandmother was among those who believed up to her dying day that we never reached the moon at all. It was all faked, and that’s why, so she claimed, Armstrong always kept to himself. I believe Armstrong stood on the surface of the moon, and I also believe he was greatly humbled by the experience. I think that he understood that 8-year-old watching and never believed he could be what that boy wanted…no, needed him to be. I believe that history for each of us ends the day before we’re born. But it’s sometimes when I’m reminded of events like this that I’m challenged to rethink that philosophy and admit that I witnessed history July 20th 1969. This film did bring back the feeling of  “a bunch of boys making models out of balsa wood”!

Gino Sassani is a member of the Southeastern Film Critic's Association (SEFCA). He is a film and television critic based in Tampa, Florida. He's also the Senior Editor here at Upcomingdiscs. Gino started reviewing films in the early 1990's as a segment of his local television show Focus. He's an award-winning recording artist for Omega Records. Gino is currently working on his 8th album Merchants & Mercenaries. Gino took over Upcomingdiscs Dec 1, 2008. He works out of a home theater he calls The Reel World. Favorite films: The Godfather, The Godfather Part II, The Body Snatcher (Val Lewton film with Karloff and Lugosi, not the pod people film), Unforgiven, Gladiator, The Lion King, Jaws, Son Of Frankenstein, The Good, The Bad And The Ugly, and Monsters, Inc.
The Karate Kid Part III & The Next Karate Kid Double Feature (Blu-ray) The Hate U Give (UHD Blu-ray) (4K)