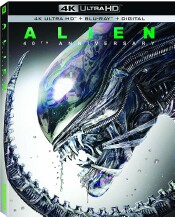 That was the slogan that drew a conglomerate of horror and science fiction fans to theatres in 1979. Was it horror or sci-fi?  Alien turned out to be a rare cross-genre film that managed to satisfy both audiences. Ridley Scott started out by bringing the “space ship” film away from the glamorous bright future and depicted a world startlingly very much like our own. In Scott’s gritty future, companies are quasi-government agencies, and these astronauts are not explorers out for glory and heroism. They are strictly blue-collar workers trying to make a buck. It’s hard to imagine that most of the cast, including Sigourney Weaver, were relative unknowns at the time. Weaver would create a new model for female leads that would later pave the way for actors like Linda Hamilton.

In case you have been in hyper-sleep for the last 40 years, here’s a rundown of the original film. The crew of the mining vessel Nostromo are prematurely awakened from their suspended animation when the ship receives a distress call. They follow the mysterious signal to a barren planet. Here they enter a giant derelict that appears to be centuries old. Inside a creature leaps from an egg and attaches itself to one of the crew. The creature molts and soon becomes a stealthy badmouth that stalks the crew one by one from the ship’s ventilation system. Ripley (Weaver) manages to set the ship’s destruct in violation of company orders to bring the creature back to Earth for study. Ripley drifts in her escape pod in the hope that the creature was destroyed.

The first film has been somewhat overshadowed in recent years with Ridley Scott’s prequel films and battling ideas for a return to the original film’s continuity. But none of these efforts, with the notable exception of James Cameron’s Aliens, has come close to creating the atmosphere and impact of the original film. The original film blended the genres of science fiction and horror perfectly. It’s not that the story was even all that original. Much of the premise can be traced back to the classic alien monster film It, The Terror From Beyond Space. No, this film was far more about execution than the story. The Giger designs from the alien itself to some of the planet images left a lasting impression with anyone who has seen them. It doesn’t matter if you were in a local movie theatre back in 1979 or have been introduced to the series long since that time. The film retains a great deal of its effectiveness because of those images.

As I watched the film with a somewhat younger crowd, it became apparent that most of their Alien experiences have been from the later films including a disastrous third and fourth film which I refuse to acknowledge even exist to the dismay, frustration and sometimes humor of those around me. As if that wasn’t bad enough, there are the two incredibly bad Alien vs. Predator films that further sunk the franchise. There hasn’t been a good Alien film since the early 1980’s, and the modern audience is too jaded by all of that bad cinema. They don’t have the memories that I have of being in a 1979 local theater and seeing all of this for the first time, and they never will. I’ve resigned myself to the fact that the franchise will never return to those images from 1979, and it makes me sad. Fortunately, I now have a 4K restoration of that first film to add to my collection.

Alien is presented in a somewhat modified aspect ratio of 2.35:1. The ultra-high-definition 2160p  image is arrived at by an HEVC codec with an impressive average bitrate of 65-70 mbps. I know many of you younger fans won’t quite understand, but I am overjoyed that the film retains its original grain. It doesn’t overburden you with what kids today consider noise. It is most prominent in the very bright white scenes of the ship’s interior. Where this release really shines is in the darkness. The HDR helps to contribute incredible contrast and black levels that deliver some of the most detailed and textured shadow definition you are likely to see. The gloss and slime when we see the close-up shots of the creature are just as affective now as ever. You can see the slime coating and the silver of the teeth that I honestly never noticed before. The fact that all of this happens from the shadows is quite an impressive display. Some of the 1979 F/X aren’t going to impress when you compare them to what we have today, but this was state-of-the-art stuff in 1979, and I’m impressed how much of it still impresses me. The organic look of the alien ship is impressive for the detail that you get to explore here. It’s all about atmosphere, and Scott pulled you in as much by what you can’t see as what you can see. There aren’t really a lot of colors to pop here. White levels are extremely bright and organic because of the retained grain element. This is how I remember seeing the film back in 1979.

The DTS-HD Master Audio track is pretty much the same from the Anthology edition, but it has better bitrate in comparison, and that larger bandwidth allows more nuance to come through. The subs take over the room when the ship first lands on the planet. Then howling winds and echoes dominate the sound field. Inside the ship there are some rather haunting background sounds that caused one of my guests to ask what that sound was. It was so realistic and immersive that she thought something else was going on. I was truly impressed when one character stands under a stream of water from the ship’s cooling core. As water falls on his face, you can hear it trace the contours of his flesh. Then he puts his head down, and the sound changes to water on the fabric of a baseball cap he’s wearing. It’s a rather stunning attention to detail that couldn’t even be appreciated in the theaters in 1979. This audio presentation takes you as far as your concentration will allow you to go inside of this world.

The extras are all on the Blu-ray copy of the film and are exactly those from the Anthology collection.

Of course, Alien is all about … the Alien. H. R. Giger has created a truly memorable creature for this film. From its acid blood to the mouth within a mouth, this creature has been ripped from our worst nightmares. Even as all but one of the later installments continue to become weaker, the appeal remains strong mostly because we can’t help but want one more look at this creature. The later films notwithstanding, this film has created a franchise that continues no matter how bad the recent films might be. Like the creature itself, this franchise is able to survive whatever harm filmmakers have tried to inflict. There’s just something about that original film that continues today. I’m not sure exactly what that is. “Whatever it was… it was big.”

Gino Sassani is a member of the Southeastern Film Critic's Association (SEFCA). He is a film and television critic based in Tampa, Florida. He's also the Senior Editor here at Upcomingdiscs. Gino started reviewing films in the early 1990's as a segment of his local television show Focus. He's an award-winning recording artist for Omega Records. Gino is currently working on his 8th album Merchants & Mercenaries. Gino took over Upcomingdiscs Dec 1, 2008. He works out of a home theater he calls The Reel World. Favorite films: The Godfather, The Godfather Part II, The Body Snatcher (Val Lewton film with Karloff and Lugosi, not the pod people film), Unforgiven, Gladiator, The Lion King, Jaws, Son Of Frankenstein, The Good, The Bad And The Ugly, and Monsters, Inc.
Destroyer (Blu-ray) Replicas (Blu-ray)