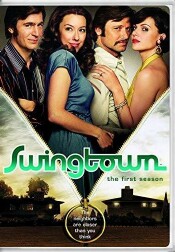 Let me begin by saying that I was a child of the 1970’s, which tends to make me approach these era shows with some caution. After such shows as That 70’s Show, to name the likely most popular, I find myself not recognizing the setting as the same 70’s I remember living. Granted I was pretty young, so the subject of swingers and sexual revolution were not exactly part of my everyday culture. So, I might be a little more forgiving if Swingtown doesn’t exactly hit on all of my memory circuits. I was 15 in 1976, living near Philadelphia, where we were all pretty much obsessed with that whole Bicentennial thing. The last thing on my mind was whether the neighbors, or, God forbid, my parents, were doing the bump and tickle with rotating partners. I’m pretty sure I’ll leave that question unanswered. Even with all of that said, about the only solid piece of nostalgia I got from Swingtown was the often sweet 70’s soundtrack. To the credit of whoever picked the music, all aspects of the 70’s music scene are represented. You get a good dose of folk, rock, summer pop, and even disco, which any self respecting child of the 70’s considers the death of what was otherwise a fine decade of music. Props to the music guy for not falling into the disco all of the time trap that these shows so often do. One minor complaint, however. Fleetwood Mac didn’t release their famous Rumors LP until Feb of 1977…Ooops. Outside of the music, it really could have been any time, any place.

It’s July 4th weekend, 1976 and Bruce Miller (Davenport) and his family are movin’ on up. Money’s been good at his options trading job, so he’s packing up his wife Susan (Parker), teen daughter Laurie (Collins) and young son BJ (Howles) and moving a few blocks over to a bigger house in a better neighborhood. For Susan, it’s a bittersweet time because she’s leaving her friend of 10 years, Janet (Shor) and her husband Roger (Hopkins) and their son for a new neighborhood. Friends, it turns out, won’t be a problem. The first night they are introduced to new neighbors Trina (Parrilla) and Tom Decker (Snow). They’re invited to a party that turns out to be a swinger’s event. The two end up swapping spouses for the night. It’s an exciting, somewhat dangerous thrill for the Millers. From then on they try to balance their new lives and friends with their old. Janet is good for most of the laughs as this super conservative girl is exposed to her old friend’s new friends. As if that wasn’t enough, Laurie Miller is in love with her 24 year old high school teacher, and BJ’s hung up on a cute little girl with a drugged out lush for a single mom. Every week’s episode features a new party. You’ll get everything from a surprise birthday party for Janet, to a night out at the Playboy Club. There’s even a Tupperware party. I do remember my Mom had those. Before it’s done everybody’s spouse is falling for somebody else, and you never know who’s going to end up with who. It all ends in a cliffhanger that is not likely to ever be resolved. The jury’s still out on next summer, but ratings are marginal, so I wouldn’t hold my breath for a second Summer Of Love.

Swingtown was a first run Summer series in 2008. It never really broke out in the ratings. After watching this first, and ultimately final, season I think I can understand why. First of all I never found any of these characters believable. The whole thing from the show’s theme song to its title sequence to the characters themselves were merely 70’s clichés. The fatal flaw, however, was that I couldn’t root for anybody here. Every time something bad happened to anyone, I thought they had it coming. These characters deserve whatever misery has come into their lives. The final question comes down to why should I even care what these people do and what consequences their actions may bring?  Some of the actors do show fair performance chops, but they are sabotaged at almost every turn by writing that pretends to take chances, all the while taking the easy road every time. Still, there are moments the performers rose above the muddled mess that is the script. I don’t know why, but I couldn’t help but feel like I did know Laurie Miller. Shanna Collins certainly sells the role. That makes her more interesting, but not any more redeemable.

Extras on the 4-disc set include deleted scenes mostly on the first disc, a half-hour making of feature, a bit on the 1970’s sexual moralities and a gag reel.

One of the show’s own runners said it best. To paraphrase, he tells us that if we don’t get on a particular character’s side, you have no show. Well, boys and girls, I couldn’t have said it any better myself. I mean, did people really act like this? From an entertainment point of view it runs out of steam pretty early. Each episode begins with Susan and Bruce trying to connect with each other and resist the wild Decker world. Then some obvious plot device throws everyone back together for a “party of the week”. Did anyone ever tell these people that “Sex has consequences”?

Gino Sassani is a member of the Southeastern Film Critic's Association (SEFCA). He is a film and television critic based in Tampa, Florida. He's also the Senior Editor here at Upcomingdiscs. Gino started reviewing films in the early 1990's as a segment of his local television show Focus. He's an award-winning recording artist for Omega Records. Gino is currently working on his 8th album Merchants & Mercenaries. Gino took over Upcomingdiscs Dec 1, 2008. He works out of a home theater he calls The Reel World. Favorite films: The Godfather, The Godfather Part II, The Body Snatcher (Val Lewton film with Karloff and Lugosi, not the pod people film), Unforgiven, Gladiator, The Lion King, Jaws, Son Of Frankenstein, The Good, The Bad And The Ugly, and Monsters, Inc.
Modest Heroes: Ponoc Short Films Theatre (Blu-Ray) Us (UHD Blu-ray) (4K)