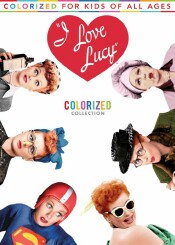 Lucille Ball was originally a radio personality starring in a popular comedy, My Favorite Husband. It was here that she began to develop the character she would continue to play for decades in television through several shows, all bearing her name in one form or another: I Love Lucy, The Lucy Show, Here’s Lucy, and Life With Lucy. See the pattern? Anyone who was a fan of the radio show would instantly recognize the red-haired actress even though they had never actually seen her on the radio. That exaggerated cry was already a staple of her physical comedy, even when she couldn’t be seen. She had also toured for many years with her real-life husband Desi Arnaz. When they could not convince a network to film a pilot of a show featuring both of them, they made it on their own dime. CBS was so impressed with the pilot they reimbursed the couple, and in 1951 I Love Lucy hit the airwaves.

Lucy played the character she had already perfected on radio and on the stage. Desi played her husband, a Cuban bandleader who headlined at the Tropicana. Lucy was always trying to find a way to get into Ricky’s act. She had no talent, but that never stopped her, usually embarrassing Ricky along the way. The couple lived in an apartment owned by the Mertzes, Fred (Frawley) and Ethel (Vance). They were not only the Ricardos’ landlords but also their closest friends. Ethel would often find herself talked into one of Lucy’s crazy schemes. The show also found comedy fodder in Ricky’s thick Cuban accent. Sometimes his mispronunciations caused hilarious misunderstandings. William Frawley as Fred had the job of playing straight man most of the time. It was a thankless job, to be sure, but he was perfect at it. He didn’t talk as much as the others, but he had some golden moments over the show’s very successful six-year run. During that time the series never once fell below number three for the entire year in ratings.

I Love Lucy changed the fledgling television industry in the 1950’s. This was a time when network television was less than a decade old. Most folks had never heard of television just 15 years earlier. I Love Lucy defined the concept of a sitcom. The show was driven by the very strong personalities of the cast. Desi Arnaz was considered a charismatic Latin lover by American women. Lucy played the perfect foil and found a mountain of gold to mine in strong physical comedy. So many modern shows owe their roots to this classic that it would be impossible to mention them all here.

Even if you are not a particular fan of the show, it would be a mistake to dismiss the impact the series had both on the situation comedy and the television industry itself. The show’s pioneering use of the three-camera format, and shooting on film allows the material to be in a position to be restored at all. That setup has remained a staple of the television comedy since that time. Desi was also a marketing genius who was the first to take advantage of the promotional value of putting the show’s name on everything from lunchboxes to sleepwear. It’s an innovation that is exaggerated in a Red Skelton skit provided in the extras here. Desi changed the way television crew did their jobs and created the modern production methods still used today.

Lucille Ball passed away in 1989. She was the last survivor of the quartet that formed the nucleus of I Love Lucy, and her passing brought about a wave of nostalgia for the series. By 1990 CBS was still looking for ways to capitalize on the resurgence of popularity. That’s where the idea of a Christmas special was first brought up. The concept evolved into colorizing the show’s own Christmas episode and offering it up as a 1990 Christmas program. The ratings were huge, and before long the network found a way to make it an annual television tradition by adding more colorized material each year. Eventually we had 16 full episodes colorized using original props, costumes, and photographs as reference points to make the colors as authentic as possible. Still, these early attempts at colorization were crude. In the years to follow that technology improved, and using the new techniques in concert with the restored 35mm film negatives we now have relatively pristine copies of these episodes, and now they have been brought together in one DVD package. You get all 16 episodes on two discs. Extras include a feature on the process, a vintage cigarette ad, and a clip from yet another Christmas show where the cast sing Jingle Bells.

The episodes span the entire run of the series and begins with Lucy Does A TV Commercial, which takes advantage of one of Lucy’s long-standing gags on the show. She was always trying to break into Ricky’s show-business popularity, this time by scheming to do a commercial on his show that features a product containing alcohol. She gets tipsy during rehearsal, and the result is a classic bit.

Job Switching contains another of the show’s common gags: the idea of the men betting the women on one silly thing or another. This time they each bet they could take on the other’s responsibilities better. It culminates in one of the show’s most famous scenes. Lucy and Ethel get jobs at a candy factory and have a comical time on the wrapping assembly line. I even saw this skit on a video waiting to take a chocolate factory tour in St. Augustine while there on vacation just weeks ago. There are a few more episodes that feature some classic moments from the show.

In the middle of the fourth season it was decided to shake things up a little and take the series on the road. For half of Season 4 the two couples travel across the country on their way to Hollywood so Ricky can star in his first film. None of the road shows are to be found here, but there are several from their stay in Hollywood, which took up the first half of the fifth season. These episodes feature the famous episode where Lucy tries to steal John Wayne’s cement block from the Chinese Theater and its sequel that has them trying to get John Wayne to reproduce the slab after the girls destroy the original. Other episodes found here feature the likes of Harpo Marx doing his iconic mirror routine, this time with Lucy. William Holden and Van Johnson also fill episodes from this run now found in color.

The road shows proved so popular that the next season they tried the same idea. This time the couples would tour Europe. This collection features stops in Scotland and Italy. The Italian episode includes yet another famous skit that has Lucy stomping grapes to prepare for a role in an Italian movie.

The final two episodes in the collection include the Christmas show that started this entire process. It’s basically a clip show. The last episode is Lucy And Superman. It’s a familiar plot for the series. Lucy promises Little Ricky’s friends that Superman will come to his birthday party so that the kids won’t go to another boy’s party on the same day. She expects Ricky to get him there, and when he can’t come through, Lucy decides to play Superman. Of course, the real deal arrives to save the day, and George Reeve puts in a guest appearance just two years before his controversial suicide.

Everyone has their favorite moments and episodes. This collection attempts to represent those more iconic moments and does a fairly good job of doing so. Of course, there are purists who won’t accept these colorized versions. This set won’t be for you. For the rest of you out there, it’s a nice little collection to put up on the shelf. No word on if they’ll be more colorized episodes in the future. There haven’t been for some years now. You could wait for an eventually larger set, but “you shouldn’t cross your bridges before they’re hatched.”

Gino Sassani is a member of the Southeastern Film Critic's Association (SEFCA). He is a film and television critic based in Tampa, Florida. He's also the Senior Editor here at Upcomingdiscs. Gino started reviewing films in the early 1990's as a segment of his local television show Focus. He's an award-winning recording artist for Omega Records. Gino is currently working on his 8th album Merchants & Mercenaries. Gino took over Upcomingdiscs Dec 1, 2008. He works out of a home theater he calls The Reel World. Favorite films: The Godfather, The Godfather Part II, The Body Snatcher (Val Lewton film with Karloff and Lugosi, not the pod people film), Unforgiven, Gladiator, The Lion King, Jaws, Son Of Frankenstein, The Good, The Bad And The Ugly, and Monsters, Inc.
Vault Arrow: The Complete Seventh Season (Blu-ray)