Posted in: Disc Reviews by Gino Sassani on September 26th, 2019 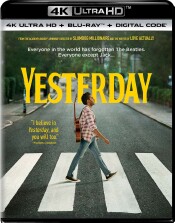 The biggest complaint I hear about today’s movies is that there’s no originality at the box office anymore. While it’s true that most of the big earners are comic book heroes, sequels, reboots, monsters, or fantasy book franchises it’s simply not accurate at all to say there isn’t anything original happening in cinema anymore. If you are willing to take a chance on something different, you’ll find it everywhere, and while it might not dominate the media buzz, it’s there all the same, and your local multiplex likely dedicates at least a couple of screens to these kinds of films. Yesterday is certainly one of those little gems that go by not completely unnoticed but receiving far less buzz than it deserves. The fact is, there’s still room for all species of film. After pulling in a more than respectable $150 million at the box office, Yesterday is now out on home video, including this UHD Blu-ray release in 4K.

Have you ever imagined what the world would be like with (fill in the blank)? For me it’s cell phones. For others it might be a particular person. What if it were The Beatles? Better yet, what if you were the only one who remembered them?

Jack Malik (Patel) is a struggling songwriter and solo performer. I can relate. He ends up playing for very small crowds who aren’t really paying attention. I can definitely relate to that. His manager, Ellie (James) has pretty much been his best friend since they were kids. She sees something in him that doesn’t appear to translate on a stage. One night Jack is riding his bike home from another failed gig when he gets hit by a bus. The accident happens just as a 12-second electrical blackout hits the entire world. He lands in the hospital, and as he recovers, he discovers the world around him has changed. There are certain cultural icons that no longer appear to exist. There’s no Coke; only Pepsi. And no one remembers The Beatles.

Before long he decides to take advantage of his advantage and starts to “write” the Beatles songs, and when he plays them, he becomes an overnight sensation. He is “discovered” by Ed Sheeran and gets to open for him in Moscow where he reveals Back In The U.S.S.R. The world is astonished at his suddenly brilliant songwriting ability. The fame starts to drive him away from Ellie, who has secretly had a crush on him for years. Manager Debra Hammer (McKinnon) swoops in like a vulture to try to mine this gold that is Jack. Of course, along the way he has pangs of guilt and finds himself looking a little deeper into himself. It’s really a bit of a coming-of-age story with a nice sci-fi twist. We eventually learn there are a couple of other people in the world who retain the memories, but the burden of giving this music back to the world falls on Jack. And that’s just as much his drive as the fame and money that the new fame brings him personally. You get the true feeling that he was left with these memories so that this music would survive.

The big surprise here is Himesh Patel, who does a remarkable job singing these songs. He’s no Lennon or McCartney, but he adds a bit of his own take on the songs, and it revitalizes them in a way. The real clever filmmaking or performance here is that he makes it somewhat easy to believe you’re hearing these songs for the first time in a world where the no longer exist for the rest of us. I’m not a super fan of The Beatles, but we all have songs we love, and the influence they’ve had on music and the world in general is indisputable. Credit director Danny Boyle for not only finding Patel, but also for letting his resource do what he does. Patel’s performance was indeed the most surprising part of this movie.

Kate McKinnon steals a lot of screen time herself. She has the greedy, unethical manager part down cold. She begins to pretty much represent all that’s evil in the world, and show business in particular. She allows herself to be taken over by the character, and she provides the perfect balance to Patel’s rather innocent view of the world. You’ll love to hate her here.

While we’re talking about performances, there’s an uncredited cameo here that needs to be given its due. I expected that either Paul McCartney or Ringo Starr would make an appearance somewhere in the film. They don’t, and it doesn’t appear either were involved in any way. One of the members does make an incredibly emotional appearance here, and he’s played by Robert Carlyle. Carlyle is an amazing actor. I’ve know that for a decade, but here he gives us a character who I suspect will tear you up a bit if you’re an uber-Beatles fan. It’s short and never credited, but it was my favorite moment in the film. It also plays out on what would the lives of these four men have been like if they had never formed the band. It’s the one element of the film I would have loved to see explored just a little more. It’s also the turning point of the movie for Jack.

This just isn’t the kind of film I ever would have expected from Danny Boyle. It certainly has a lot of that quirky, out-there feel to it, but this is the best film he’s ever directed. I believe that it will go down as his masterpiece.

Yesterday is presented in an aspect ratio of 2.39:1. The ultra-high-definition 2160p  image is arrived at by an HEVC codec with an impressive average bitrate of 65-70 mbps. The digital filmmakers might be starting to figure it all out here. Instead of the usual 2-3K source or intermediate master, this film was actually shot in 8K with a 4K intermediate process. It certainly makes a difference. This might well be the most lifelike ultra-high-\ definition image presentation I’ve encountered. Of course, there isn’t a lot of splash, but there isn’t supposed to be. Colors are brilliantly natural, and more important, they are color-neutral. The HDR contributes wonderfully reference color reproduction and nice deep and inky black levels with superior shadow definition. There are some spectacular establishment shots of L.A. when Jack arrives to start his climb to stardom. Close-up shots reveal wonderful textures and laser sharpness.

The Atmos track defaults to a dynamic 7.1 mix. It’s all about dialog and music, and both shine. Let’s start with the music. It’s not just the great dynamic range of the big performances that are served here. There are some wonderfully intimate performances that will wow you for their simplicity and warm presentation. The first time he plays Yesterday at a picnic table, the audio presentation takes you deep inside this simple acoustic performance, and you’re as overwhelmed as the people sitting there listening. It’s amazing how well this track immerses you without getting aggressive at all. On the flipside, there are the energetic stadium performances that deliver great subs and perfect use of surrounds to take us into the crowd. Dialog is perfect, and you’ll find it hard to locate a better audio presentation than the one you get here.

The extras are a bit interesting in how they are set up. You’ll find them on both discs. They are set up as a play-all that includes deleted scenes, music videos of Patel recording at Abbey Road Studios, behind-the-scenes features, and character profiles.

I’m a songwriter who can relate to the plight of Jack at the start of the film. Performers often struggle to get attention, particularly when they’re performing original music. Patel does a wonderful job of showing all of this so that those of us in that same boat really do get it. The film also does a pretty good job of expressing the cultural differences between 2019 and the 60’s when these songs were first popular. There’s a terrific moment when Jack’s going over album titles and is told The White Album offers some serious diversity issues. You could not call a release that today because of the hypersensitivity especially rampant in the entertainment industry. The film offers so many of these moments that it becomes something of a comfortable feeling it surrounds you with. I haven’t liked a film so quickly as I did this one. It grabs you from the start. I guess you could say that “Yesterday came suddenly.”

Gino Sassani is a member of the Southeastern Film Critic's Association (SEFCA). He is a film and television critic based in Tampa, Florida. He's also the Senior Editor here at Upcomingdiscs. Gino started reviewing films in the early 1990's as a segment of his local television show Focus. He's an award-winning recording artist for Omega Records. Gino is currently working on his 8th album Merchants & Mercenaries. Gino took over Upcomingdiscs Dec 1, 2008. He works out of a home theater he calls The Reel World. Favorite films: The Godfather, The Godfather Part II, The Body Snatcher (Val Lewton film with Karloff and Lugosi, not the pod people film), Unforgiven, Gladiator, The Lion King, Jaws, Son Of Frankenstein, The Good, The Bad And The Ugly, and Monsters, Inc.
Modern Family: Season 10 The Brady Bunch: 50th Anniversary TV & Movie Collection