Posted in: No Huddle by Gino Sassani on October 5th, 2019 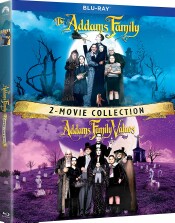 Be honest, who hears the theme music when anyone even mentions The Addams Family? I know I do, and then I have to resist the urge to do the finger snaps. Just in time for 31 Nights of Terror as well as the release of the animated version comes the double release of The Addams Family and its sequel, The Addams Family: Family Values, featuring Raul Julia and Angelica Huston as Gomez and Morticia Gomez, and let’s not forget Christopher Lloyd and Christina Ricci as Fester and Wednesday Gomez respectively. Based on the wildly popular cartoons that appeared in the New Yorker that went on to find success as television series, the The Addamses are a satirical inversion of the ideal 20th-century American family: an odd, wealthy, aristocratic clan who delight in the macabre and are seemingly unaware, or do not care, that other people find them bizarre or frightening. For me, these movies were my introduction to this family, as the TV series was bit before my time, but a gothic family unaware of their difference from other people

The first film finds the family thriving, but without an essential member. Fester, who after a falling out with his brother Gomez, leaves for the Bermuda Triangle, not to be heard from for 25 years. Looking to capitalize on Gomez’s guilt over the situation is the family lawyer Tully, who is in deep to loan shark and con woman Abigail Craven. When Craven and her son Gordon, who is the splitting image of Fester, come to collect, Tully hatches a scheme to have Gordon pose as Fester to find the hidden vault where the Addams’ family fortune is kept.

Of the two films, this was my favorite one. It was close, as the sequel keeps a lot of the magic that made this film entertaining. However, as this was the originator for the movie franchise, I have to give the edge to this one. There was good energy among the cast. Julia and Lloyd are the main draw, as the film deals primarily with the rift between the two of them. I enjoyed that Gomez doesn’t blindly accept his brother after such a long absence; he maintains his suspicions. Also, like a good partner should, Morticia has her doubts as well, most notably during her graveyard conversation with Fester.

I will say that the plot twist at the end regarding Fester perhaps should have been addressed more deeply than a simply one-off statement explaining the confusion. I began to suspect this twist during Fester’s outrage regarding the children’s sword fight. That’s aside, that was a great scene that really cemented the cohesion of this group in my opinion. Without question, Christopher Lloyd was the main draw, but it was Ricci that was the breakout star, and excellently embodied Wednesday Addams. To this day, it is difficult for me to think of the character without conjuring a picture of Ricci in goth.

Her performance in the first film was unquestionably the reason for Wednesday’s more prominent role in Family Values. In the sequel, Wednesday and Pugsley find themselves subject to dare-I-say, summer camp. Meanwhile, black widow killer Debbie sets her sights on Uncle Fester as her next target. What she doesn’t count on is the indestructibleness of an Addams. This film also featured a new addition to the family as Gomez and Morticia welcome another son, Pubert.

Like its predecessor, Family Values features the same cast, a rarity in Hollywood these days, especially given the two-year gap between films. As I mentioned earlier, the expansion of the Wednesday storyline was the most interesting plot of the film. I can’t say enough about Ricci’s performance; she made being morbid and dark cool, so much so that I found myself very nearly having the same reaction as the mean girl when Ricci smiled for the first time. This of course turned out to be a feint that revealed a more sinister plan to ruin the Thanksgiving Day play, but that just further showed the character’s guile. To be that talented as a kid, it is no wonder that she was so sought after, though this level of typecasting did cause her complications with finding good roles as an adult.

By sure to make this double feature part of your 31 Nights of Terror. Though it is unlikely to scare, it will provide a good balance that will ensure that you do not become desensitized before the 31 nights are over. With the animated film due out next week, the release of this double feature provides the best opportunity to refamiliarize yourself with everyone’s favorite gothic family, though I suspect that was by design.

Gino Sassani is a member of the Southeastern Film Critic's Association (SEFCA). He is a film and television critic based in Tampa, Florida. He's also the Senior Editor here at Upcomingdiscs. Gino started reviewing films in the early 1990's as a segment of his local television show Focus. He's an award-winning recording artist for Omega Records. Gino is currently working on his 8th album Merchants & Mercenaries. Gino took over Upcomingdiscs Dec 1, 2008. He works out of a home theater he calls The Reel World. Favorite films: The Godfather, The Godfather Part II, The Body Snatcher (Val Lewton film with Karloff and Lugosi, not the pod people film), Unforgiven, Gladiator, The Lion King, Jaws, Son Of Frankenstein, The Good, The Bad And The Ugly, and Monsters, Inc.
“31 Nights Of Terror” Joker “31 Nights Of Terror” Doom Patrol: Season 1 (Blu-ray)