Posted in: Disc Reviews by Brent Lorentson on October 16th, 2019 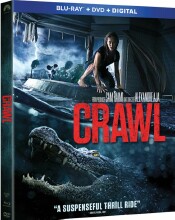 Ever since I saw High Tension, I’ve been a fan of Alexandre Aja.  The guy simply has a nice visual flair and for the most part puts out quality horror films.  From The Hills Have Eyes remake, to Mirrors, and the beautifully shot Piranha 3D, Aja has made gore look like fine art on the big screen. So to hear he’d be working with Sam Raimi on a horror film, well, that’s simply music to my ears.  It’s been a while since we’ve had a good man vs. nature horror film, and the concept of a family attempting to survive a category 5 hurricane in Florida while being hunted by alligators in their crawlspace, well, if that doesn’t get you excited, then just back away now.  Crawl isn’t a movie attempting to be high art or go for Oscars; it’s a movie that just wants you to have fun for 90 minutes, and it delivers on that.

My only major complaint comes with the start of the film where we are with Haley (Kaya Scodelario) during her swim team practice as a category 5 storm is barreling their way.  As a life time Florida resident, I know that there is no way this school would be doing this with the storm as close as it is.  Nitpicking aside, the scene is setting our heroine up as a strong, capable swimmer who has some adversity to overcome, since we see she may not be on the starting squad for her team.  This is for the most part the unnecessary back-story we’re used to seeing in horror films where we’ll of course see her overcome her self-doubt later in the film. It also seems they couldn’t help themselves by having her attend the University of Florida, making Haley a Gator herself.

Things pick up when Haley’s sister calls to see if Haley can check on their dad, since she hasn’t heard from him and knows he’s in an evacuation zone.  As the dutiful daughter Haley drives through the torrential rains and roadblocks in search of her father, in the process she finds their dog Sugar and drags her along in the search for dad.  (As an absurd idea for a sequel, can we get a film told from Sugar’s perspective? If you consider everything this dog experiences over the course of the film, it must be certain its owners are insane.)

The look of the film as we see the storm is starting to overtake Haley’s childhood neighborhood looks great, but obviously this is a set.  I’m impressed by the combination of digital and practical effects here that make this storm seem hellish and help the viewer believe this could be happening.

When Haley does eventually find her father, Dave (Barry Pepper) is trapped in the crawlspace after being attacked by an alligator.  There isn’t just one but two of these angry beasts stalking around in the dark as the crawlspace begins to fill with water.  From the  moment Haley goes down into the crawlspace, this film does not let up on the tension until the credits roll, so if you need a bathroom break, make sure you’ve taken it before this point.  The cat-and-mouse game between the humans and the alligators is great, and the cinematography is simply stunning.  Personally my favorite sequence is when Haley is trapped in the shower as the bathroom is filling up and we’re looking down seeing the alligator circling outside the shower doors.  But there are so many other well-shot sequences that put this film on another level.

A complaint people may have is how the alligators look. Sure, they are digital, but there is no way you can pull off this film by using live animals.  The fight sequences are intense and over-the-top but somehow feel realistic at the same time.  OK, so there is one attack involving a handgun that may be a bit hard to believe, but who cares? I was having too much fun with the film.  By the time the film ended I was sad. I wanted so much more, but like any fun rollercoaster ride, it has to come to an end.

If you’re expecting a film about people making stupid decisions while being hunted by alligators, you’ll be surprised.  While the decisions may seem foolish, I’m surprised how practical they all are.  I’m hoping this is the start to a new franchise; this has the potential to develop into more films that don’t necessarily follow the same characters.  We had the great 1980 film Alligator starring the recently passed Robert Forster, and then there was Rogue and a handful of other films with alligators as the key monster; we need more of them.  In real life they are not really the vicious monsters they are made out to be, but the same can be said about sharks. Too bad there hasn’t ever been a good shark film….I’m kidding, everyone loves Jaws: The Revenge.

Crawl is presented in the aspect ratio 2.39:1.  The 1080p image is arrived at with an AVC MPEG-4 codec at an average of 30 mbps.  The film has a gloomy, saturated look that is appropriate given that it takes place during a hurricane and a good portion in a crawl space of a home. Despite having many low-light scenes, there is very little noise to worry about.    Some of the more striking images involve things we are watching beneath the surface of the water. There is some beautiful carnage here, and the blood red pops nicely in the water.  I was surprised by the amount of detail captured from pores and hair to flesh injuries.  Overall this is a really nice looking transfer.

The DTS HD-Master Audio 7.1 track is somewhat of a mixed bag. What I didn’t like is how the dialog isn’t clean and clear throughout.  Maybe this was a decision made because during a storm like we see on screen it could be difficult to hear people; there’s no commentary, so who knows.  Now there are some cool things done when it comes to the ambient noise, whether it’s the dog walking around upstairs or the drops of water, it’s fun listening to the sounds moving around you.  There is a lot of bass used during the last act when the home is over taken by torrents of water.

Alternate Opening (4:49) There is a brief intro by the director you can choose to listen to before watching as he explains why we’re getting an animated version of the scene.  Personally I wish they went for this scene. It instantly pulls us into the chaos of the storm and shows us how vicious these alligators could be.

Deleted and Extended Scenes: (6:03) I’m surprised this is all there was cut from the film. Really there is nothing to great here, though there is a very long scene of Dave tending to his injury.

Beneath Crawl: (28:05) It’s been a while since I’ve gotten to see a good behind-the-scenes feature, and thankfully Crawl delivers on this.  We get a lot of BTS looks at the set and how they filmed some of the scenes.  It’s an added bonus getting to see producer Sam Raimi discuss the film with director Alexandre Aja.

Category 5 Gators: The VFX of Crawl (11:37) Here we get to see how they were able to bring the digital alligators alive for the film.

Alligator Attacks: (1.32) Are you in the mood to just see alligators brutalize humans without having a story get in the way?  This is a montage of all the gator attacks in the film for you to enjoy.

This film is perfect for the Halloween season and frankly anytime you are in the mood for a fun movie.  I put this in the same league as Deep Blue Sea, only Crawl is a much better film.  Heck, I think the films together would make an awesome double feature.  This is one of those fun popcorn flicks that I’m not ashamed to love. It’s not perfect, but this is the kind of film I wish we had more of.  Don’t cheapen it and drag it down to Sharknado status, but if Hollywood can churn out at least one solid man vs. nature film like this a year, I’ll be happy.

Brent Lorentson is a horror writer and film critic based out of Tampa, Florida. With a BA in Digital Film, he co-wrote and co-directed Scavenger Hunt. His short stories have appeared in various horror anthologies. In 2019 his short script Fertile Blood will be a part of the anthology horror film Slumber Party. He is currently working on his first novel A Dark and Secret Place set to be released in late 2019. Favorite Films: Taxi Driver, Fight Club, I Saw the Devil, The Wild Bunch, Dawn of the Dead, A Clockwork Orange, Pulp Fiction, Heathers, The Monster Squad, and High Fidelity.
Star Trek Picard Movie & TV Collection Spider-Man: Far from Home (UHD Blu-ray) (4K)