Posted in: The Reel World by Jeremy Butler on October 19th, 2019 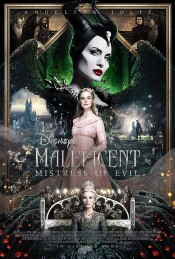 Well, well … it would appear that this weekend is the weekend of sequels with two movies worthy of 31 Nights of Terror. First is the return of Angelina Jolie as Maleficent. When we last saw the Mistress of Evil (which also happens to be the title for the sequel) she was more of a hero rather than villain. However, the sequel sees her return to her previous status as the feared fairy that ruled the Moors. How quickly people forget her contributions. Though not traditionally scary, the film features plenty of magic and carnage courtesy of Jolie. Additionally, the film features the return of Elle Fanning, Sam Riley, and Harris Dickson as Aurora, Diaval, and Prince Philip. With the addition of Chiwetel Ejofor and Ed Skrein, as well as Michelle Pfeiffer as Queen Ingrith, Philip’s mother, who gives Maleficent a run for her money for the title of Mistress of Evil.

In the five years that have passed since then the original film, Aurora has continued to reign as Queen of the Moors and is beloved by her subjects, and especially by Prince Phillip who works up the courage to propose marriage. Aurora accepts, but then comes the hard part: telling their parents. For Phillip the difficulty comes from her mother, who feels that their people have a right to pillage the Moors and worries about losing her son to Aurora, who rules the land she would like to acquire. For Aurora, the difficulty is much more challenging, as she has the unfortunate task of telling her Godmother, the protector of the Moors, Maleficent. Though initially apprehensive about the idea, Maleficent grants her permission. However, this is only the beginning of their troubles.

At a formal dinner to celebrate the union, heated words lead to a declaration of war between the two kingdoms, as well as a curse. As a result, a rift is formed between Maleficent and Aurora, who sides with her new family. Adding to the situation, Maleficent suddenly learns that she is not alone in this world, as she discovers more like her and her origins.

My regret about this is that I did not take my daughter, as this film was quite clearly with her age bracket in mind. A magical war, winged creatures, and romance — I mean, that is like the Nalyce hat trick, though I could wait on that last one. Essentially what I am saying is that I was not the target audience for the film. Despite this, I was still able to find things to enjoy. There is plenty of lighthearted comedy, such as the exchange between Aurora and Maleficent when she breaks the news of her engagement. Additionally, I found myself impressed with how seamlessly the cast was able to step back into these characters after a five-year gap. It is as if no time has passed at all. The dynamic between Aurora and her fairy godmother, Maleficent, is still the core relationship of the film, and chemistry between Jolie and Fanning are the film’s greatest strength. Granted that Phillip and Aurora’s love is meant to be true love, but like in the previous film we learn that true love can take many forms. That idea still holds true for this film as well.

I would have liked to have seen more of a backstory regarding Maleficent and her Dark Fae origins. We get a basic understanding of what fabled creature she descends from, but a flashback or more emphasis put on how Maleficent differs from traditional Dark Fae and the reason why could have help build my understanding of Maleficent’s significance. I would have also liked to have seen Chitwetel Ejiofor play a more significant role, as I felt that he was underutilized. He appears on screen suddenly and builds intrigue, but his role felt all too brief. He had a clear vision for his people and the future, and I think more time should have been devoted to fleshing out these ideals.

The final battle scene is epic and evenly matched; in fact, I would say that the film was deliberately made with 3D in my mind, as several scenes are exaggerated to give that right-in-your-face vibe. Fortunately, that does not take away from the action, which was obviously my favorite part. My hats off to Pfeiffer, who was extraordinarily devious with her plans to bring down Maleficent, as well as capture the Moors for herself. Like I said, she very clearly gave Jolie a run for her money and proved to be a worthy adversary.

Though it faces stiff competition this weekend, something tells me that Maleficent: Mistress of Evil will be the box office winner this weekend. True, Zombieland has a cult following, but nowhere near as large of the following for a Disney film. I’ve already had to resign myself to the fate of seeing the film again at my daughter’s request. Lucky for me, the experience was enjoyable the first time around, so the second shouldn’t be any different.

Jeremy Butler is a film school graduate of the International Academy of Design and Technology. He is been writing for Upcomingdiscs since 2012; however, movies have played a big part of his life for much longer. Favorite genres include horror, science fiction/fantasy, and comedy. Favorite movies are V for Vendetta, Boondocks Saints, Kiss Kiss Bang Bang, and The Godfather.
“31 Nights Of Terror” Talking With The Masters Of Horror “31 Nights Of Terror” Zombieland: Double Tap