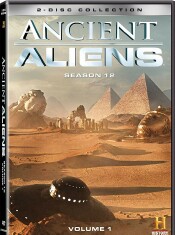 “There is a doorway in the universe. Beyond it is the promise of truth. It demands we question everything we have ever been taught. The evidence is all around us. We are not alone. We have never been alone.”

It has actually been a while since we’ve been given a copy of an Ancient Aliens season to review. So you’ll have to excuse me if I’ve somewhat lost my way. This time we have the first half of Season 12. You get 10 episodes on two discs with no extras. There is a bit of a discrepancy when it comes to the actual season number. On both History’s own website and other episode lists, these episodes actually fall into the 14th season of the series. Since Lionsgate has taken control of the network’s home video releases, the season numbers have not really matched up. So if you’re looking elsewhere for information on these episodes, you will likely find them listed as Season 14.

Here’s a list of the episodes and some brief info:

Return To Antarctica: The big idea here is that there could be alien civilizations still living under the ice. In 2018 cosmic rays were recorded coming from the ground and going skyward instead of the usual pattern of these rays coming down from space. The episode introduces us to a “whistleblower” who claims he visited a huge alien structure there when he was working with the United States military.

The Badlands Guardian: When I was a kid I loved to read the old Hardy Boys books. One of the earliest stories deals with the so-called desert giants. I was pretty fascinated by these ancient Native American lines on the ground that depicted animals that can only be seen from the sky, inviting the speculation about their purpose to a civilization that had no means of air travel. This episode revists these and other of these kinds of places in relation to an apparent face carved into an entire canyon with three-dimensional feature in Alberta, Canada. It’s called The Badlands Guardian, and it leads to Native American stories of sky people and all the way to Mars and the famous 1976 face on the surface of Mars.

Element 115: This episode deals with a whistleblower who claimed to have worked with the alien ships at Roswell. He claimed there was an element called Element 115 that served as the propulsion of these crafts. It allowed the ships to distort space around them and travel in the folds of this distortion. If it all sounds like you’ve heard it before, it’s exactly how warp drives work in Star Trek. The element was eventually discovered through the use of a collider but would not remain stable for more than a fraction of a second. The show spends a lot of time on the entire idea that we’ve been backward engineering the alien technology for decades.

The Star God Of Sirius: Did you know that the word dog has stumped language experts for centuries? Apparently no origin for the word exists. The idea here is that aliens came from the star Sirius B, the companion star to Sirius, the dog star, which cannot be seen with the naked eye. Apparently, ancient civilizations knew all the details we now know of the star, and these origins draw together many ancient peoples who used almost the same word to describe these visitors. It’s mostly a derivation of dragon, and I’ll admit a lot of civilizations use it to describe sky creatures. The idea is that it was from these aliens that this word in its various forms comes from and that dog is one of those variations.

They Came From The Sea: It is true that very little of the sea floor has been explored or even mapped. We have more details about the surface of Mars than our own ocean. So naturally that means the oceans could be hiding an aquatic race of aliens. They talk about USO’s, which are Unidentified Submerged Objects. One of the guys claims the Gulf Coast of Florida is a hot-zone for these sightings. He goes on to say that if you hang around the Florida Gulf Coast long enough, you will see one yourself. I happen to have lived on the Florida Gulf Coast for nearly 40 years, and so far no USO’s.  Some of the interesting points here, however, are the stories of the octopus family, which has no fossil record leading to the current creature. The idea is it came from space, as did many creatures that live on the bottom of deep oceans. Apparently the International Space Station encountered plankton growing on their windows … on the outside in the cold vacuum of space.

Secrets Of The Maya: The ancient pre-Columbian civilizations have been a common topic on the show throughout the years. This time they try to make the argument that Hindu people visited these civilizations hundreds of years before Columbus. Here they really lose me. We’re shown South American Mayan artifacts and then Hindu artifacts that they are claiming are exact. I don’t even think they look a little alike. Yeah, they both have fangs. Wait until these guys see Dracula; they’re going to be convinced that Bela Lugosi is the goddess Shiva reincarnated. Oh boy, I can’t wait to see that episode.

The Druid Connection: I have a particularly keen interest in anything Druid. I was born on the Summer Solstice, so would have been kind of special to those guys. This is another episode like the previous one where they attempt to show American artifacts that match another civilizations. This time they claim the Celtic Druids came here two thousand years before Columbus. Again it relies on making very tenuous connections.

The Reptilian Agenda: It sure seems like this season was made just for me. Gulf Coast USO’s, Druids who worshipped my birthday, and now a civilization of reptilian aliens who fought a war with other aliens here on Earth. I happen to be a snake breeder and obviously love all things reptile. Here we see old depictions of reptiles that have human form, which obviously means they simply must have encountered these creatures. Hope a thousand years from now scientist don’t see Godzilla. They’re going to think we must have been fighting giant lizards. I mean, according to these guys, why else would we depict them?

The Alien Infection: It has been a long-running part of the series that aliens have been manipulating our DNA. This episode suggests they didn’t do it in a lab, but through bacteria and other diseases. They believe the early 20th-century flu epidemic was intended to cull the human race so that it would survive. They also look for clues in the DNA that we’re being slowly transformed into them. We’re told there are likely many aliens among us who look just like other humans. Better keep an eye on you spouse, neighbor or coworkers.

Project Hybrid: This could easily be a second part to the previous episode, as it also deals with alien manipulation of our DNA and even our environment. Could aliens be terraforming the Earth? Apparently scientists are stumped why some of us (yeah, they’re targeting me again) are RH negative. There is also a huge spike in abductees who are RH negative. When they told me I was a universal donor, they weren’t kidding.

It’s another 10 episodes, and while I don’t believe in 90% of this stuff, I have found myself learning things through watching the show. I do find it incredibly entertaining. It’s one of those shows you almost hate to admit you’re into. It’s worth the look for a few laughs, and will you learn something along the way? “Ancient astronaut theorists give a resounding yes.”

Gino Sassani is a member of the Southeastern Film Critic's Association (SEFCA). He is a film and television critic based in Tampa, Florida. He's also the Senior Editor here at Upcomingdiscs. Gino started reviewing films in the early 1990's as a segment of his local television show Focus. He's an award-winning recording artist for Omega Records. Gino is currently working on his 8th album Merchants & Mercenaries. Gino took over Upcomingdiscs Dec 1, 2008. He works out of a home theater he calls The Reel World. Favorite films: The Godfather, The Godfather Part II, The Body Snatcher (Val Lewton film with Karloff and Lugosi, not the pod people film), Unforgiven, Gladiator, The Lion King, Jaws, Son Of Frankenstein, The Good, The Bad And The Ugly, and Monsters, Inc.
A Beautiful Day in The Neighborhood The Handmaid’s Tale: Season 3 (Blu-ray)