Posted in: Disc Reviews by Jeremy Butler on December 21st, 2019 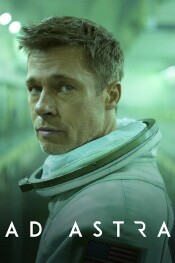 “The near future. A time of both hope and conflict. Humanity looks to the stars for intelligent life and the promise of progress. To the stars…”

You know a movie’s bad when Brad Pitt isn’t enough to save it. However, where Ad Astra falls down is in execution of story rather than a failure on the part of Mr. Pitt. The premise was interesting: a son follows in the footsteps of his hero astronaut father to learn that his father, who was previously believed to be dead, may be responsible for catastrophic events plaguing the Earth. There is depth to the story, and the idea of human beings colonizing other planets was shown in a truly interesting and realistic manner, but instead of this being the forefront of the film, the story focuses primarily on a emotional journey that never pans out. The film also features a cast of superstars whose performances were little more than cameos. A waste of talent, if you ask me. I mean, why put together a cast that includes Tommy Lee Jones, Donald Sutherland, Liv Tyler, and Ruth Negga, just to have their contributions be the length of a commercial. Yes, I know that was an exaggeration, but it just seems wasteful.

Ad Astra follows Major Roy McBride as he plummets back to Earth from an apparent space ladder (interesting idea; wish they would have spent more time explaining it), when a power surge of unknown origin destroys portions of the spacecraft. Upon landing safely, McBride is informed that the source of the surges have been traced back to the Lima Project, a 30-year-old highly classified mission tasked with looking for intelligent life; this mission has significance to McBride because the mission was led by his father, Space Command legend Clifford McBride, who was thought to be dead up until this point. In that moment, McBride learns that not only is his father alive, but he is believed to be responsible for an event that resulted in the loss of thousands of lives. McBride is tasked with the mission of travelling across an unforgiving solar system in hopes of making contact with his father, as well as discovering the truth of his father’s wayward mission thirty years earlier.

Again, it was an intriguing premise, and there were several themes that were very interesting, had they just been developed. The first one that comes to mind is the space pirates. As Pitt’s character attempts to make it across the surface of the launch pad (yes, a launch pad on the moon; more to come about that later), he is set upon by space pirates looking to steal his rover and scavenge any supplies they can. Obviously Pitt survives the encounter, but this sequence raises more questions than it answers. Clearly there is a population that is somehow sustaining itself on the moon; the prospect of that is very intriguing, and the fact that they are treated as a minor annoyance feels like a missed opportunity. I would have liked to have seen this idea fleshed out more, perhaps even see one up close rather than the one-off manner that was done here.

Now let’s dig into how space travel is addressed in this film. In this story’s universe, space travel has become a pretty common thing. For example, a trip to the moon is considered a commercial flight. I’ll let that sink in. As unbelievable as that sounds, the manner in which it is represented on screen was completely plausible and realistic, with the exception of the idea of paying $1,500 for a pillow and blanket during a flight. Then again, you’ve got to pay for that jet fuel to the moon somehow. Back on point, I found the visual representation of this excellent. I mean, the idea of a space airport on the moon was beyond anything my imagination could have conjured. At this point, I was all into the story, but then it moves away from this intrigue and delves into a story that is all about Pitt’s character dysfunction. Everything becomes about how he internalizes his emotions for the sake of his job and the mission, and how his emotional detachment cost him his only human connection. Truthfully, it is like one big therapy session, with his feelings of abandonment stemming from his father’s failed mission being the clear cause.

Ad Astra is presented in its original aspect ratio of 2.39:1. The ultra-high-definition 2160p  image is arrived at by an HEVC codec with an impressive average bitrate of 55-60 mbps. The movie was shot on film, so we have a native 4K source and a 4K digital intermediate going for us here. That means a lot of things. The UHD is not merely an upconvert, and it allows you the best detail and resolution possible in UHD. It also means there is an element of grain that was not, fortunately, stripped away in the transfer process. The film actually embraces the grain, and you’ll see various kinds of film stock used in various places so that the nature and density of the grain actually changes throughout the film. Of course, you’re going to get something that is truly organic. That’s going to be very important for a film that often embraces stillness. There’s still that wonderful living feel even when little is actually moving. The setting is mostly deep space, so there aren’t a lot of chances for a ton of color here. A few notable exceptions are the re-entry to earth and some of the establishment shots of Earth from space. There’s that wonderful warm blue aura that envelopes the planet. The HDR contributes excellent black levels which are inky black with wonderful contrast as stars and ships provide a piercing element of light against such a black background. Detail on close-ups of people in space suits allows the character to come through all of that equipment.

The Atmos track defaults to a pretty solid 7.1 mix. There is actually a lot of silence here and that heightens the sound design when it does come alive. Often it’s very subtle. An element of radio static coming from behind us or an echo in an empty space craft. The score is an unusual one that really delivers atmospheric sounds rather than traditional music. Yes, there is some standard score material here, but you’re just as likely going to find silence as often. Dialog cuts through even as it is intentionally muffled somewhat because of the helmet communications.

There is an audio commentary by director James Gray.

Deleted Scenes: (3:23) There are only two, and with a play-all option. There is also an optional audio commentary with director James Gray.

To The Stars: (8:35) Cast and crew offer their insights amidst too many clips from the film. There is very little behind-the-scenes footage in this one.

A Man Named Roy: (8:45) What starts as a complete love-fest for Brad Pitt also becomes a profile of the character which includes Pitt’s own insights into the character.

The Crew Of The Cepheus: (9:08) This one is more of a behind-the-scenes feature that touches on the make-up f/x of the baboon attack and some wire work and stunt choreography.

The Art Of Ad Astra: (11:15) Here we see some of the inspiration and creative processes that led to the look of the film. There’s also a bit on the attempt to make spaceship console somewhat authentic. We also look at  production design, lighting, cinematography, set design, and sound design.

Reach For The Stars: (7:21) This feature talks about some of the real space science. Astronaut Garrett Reisman offers his own experiences in space.

In an effort to move the plot forward, they attempt to channel this dysfunction into motivation to learn the truth behind his father’s original mission, but even that discovery felt rushed and too easy. Catharsis was supposed to come with the final confrontation, but this scene was as unemotional as the rest of the film and pretty much just a letdown. A lot of momentum and lives lost went into establishing this confrontation for it all to be squandered. Long story short, Ad Astra is full of intrigue with no payoff.

Jeremy Butler is a film school graduate of the International Academy of Design and Technology. He is been writing for Upcomingdiscs since 2012; however, movies have played a big part of his life for much longer. Favorite genres include horror, science fiction/fantasy, and comedy. Favorite movies are V for Vendetta, Boondocks Saints, Kiss Kiss Bang Bang, and The Godfather.
City on a Hill: Season One Cats