Posted in: Disc Reviews by Brent Lorentson on September 24th, 2020 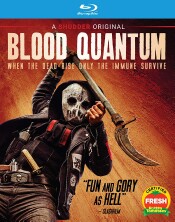 Ever since The Walking Dead first aired. it seems the zombie genre was not only revived but milked for all it was worth, and still studios continued to bleed the genre dry to the point even most diehard horror fans are sick of the sub-genre.  I’m a sucker for zombie films, and even I have tired of them, but I’ll always hold out hope for some writer or filmmaker to come along and inject some creativity into the genre.  It’s possible; I mean, look how long the vampire stories have been around, or even ghost stories, and yet there still are new takes on the subject matter that get us excited about them again.  That’s where Blood Quantum gave me some hope. Zombies on a Native American reservation. I was hopeful for some indigenous lore being injected into this, giving us a fresh perspective…but alas, we get a watered-down, unoriginal, snooze-fest with a little bit of gore  to keep viewers somewhat interested.

The film starts off promising enough as we see an old man gutting his freshly caught fish, and then suddenly they all seem to come back to life and flop around him.  We are then introduced to the main characters that reside on the Red Crow reservation; there is the Sheriff Traylor (Michael Greeneyes), his son Joseph (Forrest Goodluck) and his ex-wife Joss (Elle-Maija Tailfeathers).  To basically inject a little bit of drama, there is also Joseph’s troublemaking best friend Lysol (Kiowa Gordon) and Josephs pregnant girlfriend Charlie (Olivia Scriven). Honestly, without these two characters there wouldn’t be much in the way of character drama, but to be honest, even adding them to the dynamic, this still is a far cry from being a compelling story.  The first third of the film honestly works well as a self-contained story as we see the start of the zombie outbreak. It’s on a small and believable scale as we see dogs and eventually humans coming back from the dead, and the chaos of not knowing what is happening on the reservation is compelling enough, especially when we see certain people get bitten.  Then the film throws a curve ball and sends us six months later into the outbreak, and those who were bitten and should be goners are somehow still amongst the living.  It’s found out that for some reason that the indigenous people are immune to the bites, and this is where the film becomes really problematic for me.

The people of the Red Crow reservation are doing what they can to protect any survivors, but obviously they are running out of resources, and the infected are managing to get into their protected areas.  Where this gets frustrating is everything we see from this point forward feels recycled from a variety of zombie films, and what’s missing the most is that there is no connection with these characters.  We haven’t seen them struggle or overcome adversity or even seen them experience loss; we just see them surviving and basically running a camp that seems pretty efficient.  Honestly, my favorite bit involves how the zombies are prevented from crossing the bridge (I won’t spoil it, but I’ll say it is a fun gory bit.)  We don’t get to see much of the world outside the protection of the camp, and what we do see doesn’t seem all that dangerous.

Sure, there are plenty of the undead that we get to see dispatched in various gory ways, but there’s no tension at all.  This is frustrating, because on a technical perspective this is a good-looking film with nice cinematography and a nice blend of practical and special FX, but where this film suffers is with the script.  None of the characters are properly fleshed out. Even in moments where main characters are in peril and may die, it didn’t seem to matter, because these characters just come off as nothing more than just another thing to see get mauled on screen.  There’s a scene early on of a child being killed, and the scene simply lacks any emotion, not because it’s meant to be a dark and cruel scene, but because the performances and the execution of the scene had about as much heart as someone phoning in a pizza order.  Unfortunately that’s how the last 2/3 of this film is.  It may not be the worst zombie film I’ve seen, but it’s definitely a squandered opportunity for something that could have been so much more.

Blood Quantum is presented in the aspect ratio 2.35:1.  The 1080p image is arrived at with an AVC MPEG-4 codec at an average of 28 mbps.  Thankfully this is a good looking film and doesn’t suffer from awful CGI.  Though the image is a bit saturated and doesn’t exactly pop with color, some of the wide/establishing shots look great here.  Though the blood looks a bit muddy at times, I prefer this look over the typical cartoonish CGI blood we get most of the time in low-budget zombie films. When the film has its night time or low-lit shots, we still get enough detail without the blacks getting crushed.  This isn’t going to win any awards, but it definitely looks better than most direct–video zombie films, and it does manage a decent job of giving us some detail and textures.

The DTS-HD Master Audio 5.1 track is about what you’d expect considering this is a low-budget film.  The dialog comes through clean and clear, but with this kind of film it’s the sound mix with the gore sound FX that can make or break a film.  The impacts (like with the grandfathers sword) are what work best, along with some of the moments with the zombies feasting on the humans.  What’s missing is there wasn’t anything that played with “space”. The base camp is in the woods, but there isn’t much done to play with the ambience to help build some tension.

While Blood Quantum isn’t a bad film, its similarities to The Walking Dead are just frustrating to the point you’re better off just watching that show. A film to just have on in the background and just watch for the sporadic gore, that’s about all this is good for.  It wouldn’t be so bad if there weren’t so many other choices out there when wanting to check out a zombie film.

Brent Lorentson is a horror writer and film critic based out of Tampa, Florida. With a BA in Digital Film, he co-wrote and co-directed Scavenger Hunt. His short stories have appeared in various horror anthologies. In 2019 his short script Fertile Blood will be a part of the anthology horror film Slumber Party. He is currently working on his first novel A Dark and Secret Place set to be released in late 2019. Favorite Films: Taxi Driver, Fight Club, I Saw the Devil, The Wild Bunch, Dawn of the Dead, A Clockwork Orange, Pulp Fiction, Heathers, The Monster Squad, and High Fidelity.
We Bare Bears Movie DC’s Legends of Tomorrow: The Complete Fifth Season (Blu-ray)