Posted in: No Huddle by Jeremy Butler on December 17th, 2020 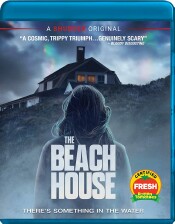 As a directorial debut, I’d rate the film as average. There’s intrigue, but it is light on explanations. The film is also a bit of a slow burn, as I was a quarter through the film before anything of substance began to happen. When it comes to the horror genre, that is a bit long to wait. The film appeared to be focused on trying to get the audience to invest in the characters in the beginning more than moving the plot along. Once things began to happen, the intrigue began to build more, and the story was able to maintain my interest. That said, I’m still confused as to the overall setup for the film. Despite its 88-minute runtime, the film had more of an indie-student-film vibe to it. It has a talented cast that included Liana Liberato (Light as a Feather) and Jake Weber (Dawn of the Dead), but with the exception of Liberato’s character, the cast is a bit one-dimensional. All in all, while intriguing, the film felt a bit underdeveloped.

The story follows a young couple, Emily and Randall (Liberato and Noah Le Gros), as they arrive at Randall’s family beach house. There is tension between the couple due to a recent change in their circumstance; Randall has left college and is encouraging Emily to do the same. He even goes as far as to suggest the romantic notion of living at the beach house year-round. Adding to the tension, the young couple find that another couple is also staying at the house; Mitch and Jane Turner (Weber and Maryann Nagal), old friends of Randall’s parents. Ultimately the quartet decide that there is plenty of room for all of them to stay at the house.

Eventually it is revealed that Jane is terminally ill, and Mitch is trying to get her one last good vacation. While having dinner, the group engages in some recreational drug use, only for them all to become violently ill. The next day they are still suffering the effects until it becomes abundantly clear that something deeper is at play. Each of them begins to become overwhelmingly ill with a suspicious sickness that causes them to turn on one another and engage in a battle that not everyone will survive.

So now that I’ve seen the entire film, it is clear where the sickness originated from, but initially it was a bit of a mystery. There was some foreboding in the form of an offhand comment or Emily’s conversation at dinner, where she speaks about organic chemistry, but it doesn’t become one hundred percent clear what is causing everything until well into the film. This should have been moved up right after the dinner scene. There is a lot of setup that could be cut in order to pick up the pace of the story. The pacing is where the film is hurt the most; the first forty minutes needed to be condensed by half, because this was the period of time that I drifted the most. It is also the period that I imagine that the film will lose most of its audience as they hunt for something more fast-paced. Those who stick it out will get some action, but again, explanation will be scarce to say the least.

There are some pointless moments that probably could be removed. The jellyfish scene with Liberato, while interesting as it showed her character’s determination and resilience, really serves no real purpose for the film’s overall plot. The removal of scenes like that would have brought the important aspects like the danger the group found themselves in to the forefront a lot earlier. However, this most likely would have drastically reduced the film’s runtime.

Intriguing yet lacking in substance, it is challenging to overcome the film’s deficiencies, but the moments of terror make the film not terrible. It’s not a film that I would watch twice, but it’s also not something that I regret watching. Liberato is an actress that I’ve noticed for a while, and she gives a good enough performance that the film is worth at least one watch. Just don’t expect too much from the film.

Jeremy Butler is a film school graduate of the International Academy of Design and Technology. He is been writing for Upcomingdiscs since 2012; however, movies have played a big part of his life for much longer. Favorite genres include horror, science fiction/fantasy, and comedy. Favorite movies are V for Vendetta, Boondocks Saints, Kiss Kiss Bang Bang, and The Godfather.
Words On Bathroom Walls (Blu-ray) Yellowstone: Season Three (Blu-ray)