Earwig and the Witch (Blu-Ray) 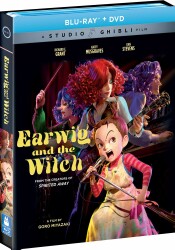 A year and a half ago, I had the opportunity to review a limited edition of Spirited Away, which was one of the pinnacles of Studio Ghibli animation, a film where the animation, story, and music were so well done that it warranted repeat viewings in appreciation.  So, when I received today’s movie for reviewing and it boasted the same production house as Spirited Away, well, then my curiosity is certainly awakened.  But if I learned anything from other famous franchises, production is nothing without a good story and direction.  Let’s see how Earwig and the Witch turns out.

A red-haired woman (voiced by Sherina Munaf/Kacey Musgraves) is riding a motorcycle on a busy highway.  All of a sudden, a car speeds up behind her.  She proceeds to go faster; the other car keeps up as well.  They are weaving in and out of traffic, and then suddenly the car behind her comes alive with a full set of teeth.  The woman takes a couple of locks of red hair and transforms them magically into worms as she throws it at the car and is able to find her way out of the situation.

The lady arrives at her destination, the St. Morwald’s Home for Children.  She has a baby with her, and she proceeds to leave her at the doorstep.  She says goodbye to her daughter, who is named Earwig.  Earwig is found the next morning by the Home’s caretakers, and we learn that the red-haired woman was a witch and that she was trying to escape twelve other witches.  The caretakers also decide to change the name of the girl to Erica Wigg.   Let’s cue those credits.

Many years later, we meet back up with Earwig (or Erica if you prefer) (voiced by Kokoro Hirasawa/Taylor Paige Henderson) who is with her friend Custard (voiced by Yu Saito/Logan Hannan).  They get inside a locked tower and make their way to the roof.  They watch the sights such as a passing ship and a town below teeming with lights.  They talk about making funny faces so they don’t get adopted the next day by any potential wannabe parents.

The next day, we see Earwig again as she visits the cooks to profess her love for shepherd’s pie.  She finally makes her way to the would-be parents and puts on her best messed-up face.  This would normally work for any other adults until a short and squat blue-haired woman named Bella Yaga (voiced by Shinobu Terajima/Vanessa Marshall) and a towering man with eleven ears named the Mandrake (voiced by Etsuishi Toyokawa/Richard E. Grant) apparently want to adopt.  Despite Earwig’s best efforts, Bella selects her, and the three of them go home.  How will Earwig adapt to her new life with this pair, and will she ever enjoy shepherd’s pie again?

The rest of the film focuses on the relationship between Earwig, Bella, and the Mandrake.  She tries to adapt to her new home life while bringing her charm, wit, and perseverance to have people work to do her bidding to the “couple”.  It has some touches of charm, and all of the characters are interesting enough to see the story through.  But there is one problem that plagues this movie from beginning to end.  The essence of time.

The film only runs 82 minutes long, which might sound typical to those who enjoy Disney sequels or DC animated films.  The problem is in either of those cases, the characters or the stories are so well known that you really don’t need to spend time with background or getting viewers up to speed.  In this movie, we are starting from the very beginning.

Heck, she is a baby in the first five minutes of the movie.  We just barely get adapted to her life at the Home for Children, and then she’s off to be adopted by Bella and Mandrake.  By the time we get acclimated to that relationship, we get a whopper of a climax only to have the movie end?  What?  Where is another 30-40 minutes of resolving this climax?  I guess we need another movie.

Or so we hope.  When working with an unknown entity, one has to be careful not to leave it so open-ended that it forces a sequel that might never come.  Ever see the Planet of the Apes reboot back in 2001?  It’s been twenty years; I think I can spoil that one.

After Mark Wahlberg beats the Apes and comes back to Earth through the same wormhole he left in, he returns to a very different planet where the apes are suddenly in charge.  The whopper being that the leader of the Apes is in the same pose as the Lincoln statue in Washington, DC.  Holy crap, great cliffhanger ending, right?  Except the sequel never came.  And now everyone hates the movie (well, except me, because I love all things Planet of the Apes, but still).

Well, that’s kinda what I worry about here.  The movie doesn’t get going until an hour into the movie, and then boom, cliffhanger, and it’s over in the next twenty.  The development is there, but it is not given enough room to breathe.  It seriously needs another hour.  But I’m not so sure it needs a whole another movie, which is what the creators of this film seem to basing their hopes on here.

The film is shown in a 1.85:1 widescreen format.  This film is different from typically Studio Ghibli productions as its one hundred percent 3d computer generated animation.  The result certainly has a lot of depth and is wonderful to look at.  Just take a look at all of the details in Bella Yoga’s workshop as you clearly see all of the ingredients necessary for her potions.  But after a while, the look of the film feels a tad artificial and lacks the soul of many other Ghibli films.  The film’s material is from the 70’s/80’s depending on your interpretation and therefore it would stand to reason that a completely CG film doesn’t accurately display the source in the way many of us would envision.  There is nothing wrong with the actual quality of the animation, it’s just feels horribly out of place in comparison.

The audio tracks are 5.1 DTS HD in its original Japanese and English. I primarily listened to the Japanese track out of habit but I will say that the English track is probably more suitable given the original source of the story that this draws from.  Either way, the dialog is clear and the sound is easily the strongest part of the film.  Surrounds are used well from the typical rain and thunder highlights to something as simple as a pouring the ingredients for a spell.   It has a very active soundfield and really brightens up the film.

I would be not doing the film justice if I didn’t mention the music for the film which is a complete throwback to the Doors or the Animals of the 1960’s complete with organs and wailing guitars.  Music plays such a pivotal role in the film and it would have been nice to just get an isolated music track for the entire film.  It compliments so well and helps to set the mood.  Subtitles are provided in English for the original soundtrack and English SDH is provided for the English track as well.

Feature Length Storyboards: Storyboards for the duration of the film. A fun way to watch after you have seen the movie a few times.  I kinda wish this film wasn’t full computer generated, I think I would have appreciated this featurette more if I thought those storyboards played more of a role in the final product.

Creating Earwig and the Witch 29:46: Producer, Toshio Suzuki and Director, Goro Miyazaki along with members of the crew take us on a journey of how they created the film.  This was certainly an odd project for Miyazaki and they explain how he came upon directing this one.  They also discuss the use of music in this film and how it played such a pivotal part.  We move on to the computer animation creation and explaining that they did visit the UK in order to make the film seem more authentic to its inspirational roots.  Thankfully near the end they do mention that there should be a second one.  We will see if it ever materializes.  In Japanese with English subtitles.

Interviews with Japanese Voice Cast 15:32: Kokoro Hirasawa (Earwig), Shinobu Terajima (Bella Yoga) and Etsushi Toyokawa (Mandrake) among other voice actors join us to speak about their characters, influences, and the animation behind the film.  Too short for each character to really get a feel of anybody.  Also, it would have been nice to see some English Voice Cast involvement as well.  In Japanese with English Subtitles.

Trailers & Teasers 7:45: Let’s see, we get an English trailer, an English Subtitled trailer and an English teaser.  Then three more quick spots in English.  Flipping over to the Japanese side, we have one trailer and tv spot.  It’s funny how much they promote Earwig’s mother when she’s in 5 minutes of the film.

Most Studio Ghibli films open up to rave reviews.  However, Earwig and the Witch did not.  It opened up to mostly mixed reviews and the magic that usually holds these features together seems to be missing.  Whether it was the fact that the movie started slow and ended on a cliffhanger (with no clear sequel in sight) or whether it was the lack of hand drawn animation, it could be argued either way these factors contributed to a sub-par film.  It’s far from a horrible film, it’s actually quite entertaining at some points but there is nothing special about it when from the trailers it looked to have plenty of potential.

The disc package has excellent video (as long as you like your Japanese anime to be computer generated) and the sound is a pleasure to listen to.  The extras are decent but honestly feel a bit bland as they are almost cookie cutter in presentation.  The real question is if and when a sequel is going to show up.  If it does, then perhaps I have judged too harshly and this film is better judged on the sum of its parts.  If the sequel never shows up, then it becomes another Golden Compass or Eragon, an interesting enough first film that never is completed and will always suffer for it.  Enjoy.

Michael Durr has been reviewing movies for the better part of fifteen years now. He primarily enjoys thrillers, sci-fi, animation and even a little courtroom drama. His favorite films include Escape from New York, the Goonies and anything with Alyssa Milano. When he’s not praising Kurt Russell as the greatest actor of our time or scratching his head over a David Lynch flick, he’s spending time at home in Texas with his lovely wife, Lori and his amazing son. How they put up with him is a mystery, but even Basil Rathbone doesn’t have the time to solve that one.
The Undoing (Blu-ray) News of the World (UHD Blu-ray) (4K)