The Alienist: Angel of Darkness 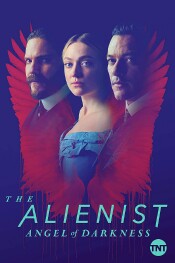 “In the 19th century, persons suffering from mental illness were thought to be alienated from their own true natures. Experts who studied them were therefore known as alienists.”

The Alienist was drama airing on TNT for two seasons and is the latest in the recent trend of period-piece dramas to populate the television series market. Like many of these kinds of shows, The Alienist relies as much on atmosphere as it does on the actual story being told. The series is intended to attack the senses and obviously elicit some kind of a reaction. Filmed in Budapest, the show takes us back to New York City in the 1890’s and truly builds a rather deep and dark environment that you will likely remember far longer than any other element of the show. The series also utilizes a tremendous amount of computer-generated images for set extensions and sometimes complete environments. It’s an ambitious undertaking and might well have been the crowning achievement of the series.

For its second season the series was given a somewhat new title, as if it were a sequel rather than a series. So this season is officially called The Alienist: Angel Of Darkness. There are a few real changes in the show that point to a slight retool, but the essentials are still the same. Sarah Howard (Fanning) became the first female officer of the New York Police Department and worked in a squad that served directly under Teddy Roosevelt, who was the Police Commissioner of the time, the time being the end of the 19th century. As was hinted at when the first season concluded, Sarah has become a detective in her own right. Now Roosevelt has moved on to become the Undersecretary of the Navy and on his way to his path to the Presidency, and she faces the same kind of prejudice based on her sex that she faced in the department. She’s been given a case by a visiting dignitary from Spain whose child has been kidnapped.

Meanwhile a woman is about to be put to death for killing her own child. The child disappeared from her hospital room, and even without a body she was convicted of the murder and sentenced to death in the electric chair. Sarah sees the potential link between that case and hers and arrives at the execution in an ill-fated attempt to stop it. The execution is also picketed by women’s suffrage movement that is causing more than a little grief for the police.

Sarah does not have to face the case alone. She recruits the assistance of her “partners” from the first season, which obviously have to include Dr. Laszlo Kreizler (Bruhl). He is the titular alienist. No, he’s not hunting down reports of flying saucers and alien abduction. In the 19th century an alienist was someone who studied mental illness. His knowledge of the human mind makes him a big addition to solving crimes, as he’s pretty much an early model of a profiler. He signs on to help with a few new complications to his own life. At his Center a young boy hangs himself, and Kreizler’s position and reputation suffer.

Also returning is Luke Evans as John Moore. Moore was a reporter and sketch artist who formed the third leg of this trio of investigators, each bringing something unique to the cause. This season finds his life very much changed. He’s now a lead reporter for the New York Times and is engaged to be married to the niece of media empire mogul William Randolph Hearst (Letscher). Hearst isn’t happy that Moore is working for the competition and less happy along with niece Violet (Hayward) that Moore is more interested in solving the case with Sarah. It doesn’t help that he had proposed to Sarah and been rejected in the previous season.

The season doesn’t waste the entire run on trying to solve the mystery. In fact it’s only after the culprit is identified in the mid-season that the show actually starts to get interesting. The first few episodes fall flat. These guys just aren’t as interesting as detectives anymore. There’s something terribly flat and tedious about these episodes. It’s like they are spending too much time trying to set up characters we already know by now. It’s when they discover the guilty party that things ramp up. Now the series is a story of cat and mouse. The perp continues to kill along with an underworld accomplice, and the characters themselves are in danger from this disturbed individual. Now things are cooking.

The series still allows the period to be a huge part of the story, and that’s the only thing that keeps it all interesting enough through the first few episodes. Hearst was part of a muckraking scheme to try to lure the country into a war with Spain that eventually erupts ,but somewhat after this story is told. The series also delivers a couple of great performances in the supporting cast.

Monk’s Ted Levine returns as Chief Thomas Byrnes, who was against our heroes from the very beginning. He had expected to become commissioner when Roosevelt stepped in, and he’s been working behind the scenes ever since to use whatever power and strings he has to hurt them. Rosy McEwen is absolutely the scene stealer of the new season as Lilly. Lilly is a central character who I can’t really tell you much about without spoiling your viewing, but she’s an exceptional performer who can flash the most diabolical of eyes. If looks could kill, Rose would be a class A marksman … OK, markswoman.

The series has now ended with this entry. It’s obviously an expensive show to make and just never really caught on in the ratings. With so much to compete against these days from over 100 sources of scripted drama, it’s hard to find and maintain an audience. And while this one had incredible moments, they just didn’t have the kind of consistency required to justify the cost. Fans will have to find something else to do with their time, like “conducting symphonies, solving the most arduous mathematical problems, and contemplating the mysteries of the universe.”

Gino Sassani is a member of the Southeastern Film Critic's Association (SEFCA). He is a film and television critic based in Tampa, Florida. He's also the Senior Editor here at Upcomingdiscs. Gino started reviewing films in the early 1990's as a segment of his local television show Focus. He's an award-winning recording artist for Omega Records. Gino is currently working on his 8th album Merchants & Mercenaries. Gino took over Upcomingdiscs Dec 1, 2008. He works out of a home theater he calls The Reel World. Favorite films: The Godfather, The Godfather Part II, The Body Snatcher (Val Lewton film with Karloff and Lugosi, not the pod people film), Unforgiven, Gladiator, The Lion King, Jaws, Son Of Frankenstein, The Good, The Bad And The Ugly, and Monsters, Inc.
Justice Society: World War II (UHD Blu-ray) (4K) Mission: Impossible 25th Anniversary Limited Edition (Blu-ray)