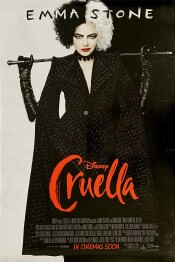 “The thing is, I was born brilliant, born bad, and a little bit mad. I’m Cruella.”

Growing up just about every kid I knew saw 101 Dalmatians in one form or another. It was released the year I was born, so I didn’t get to see it originally on the big screen. Still it was a part of those magical Disney features that found a way to reach you and eventually into your heart. While the film’s stars were the dogs, of course every good story needs a good villain. The villain in 101 Dalmatians was the white/black split-haired Cruella de Vil. With the help of an iconic Sherman Brothers’ song children would be able to tell you about it in verse. You’re left with the idea that “if she doesn’t scare you no evil thing will”. There was a sequel that wasn’t so good, and that horrible live-action version back in 1996. After that dismal failure it appeared we were done with the dogs and the fashion designer who wanted to make a coat out of the adorable puppies. We were but lately Disney has been in the thrall of two trends. They are remaking all of their animated classics into live-action, or at least CGI-action films. They have also traveled down a path to redeem the lady villains of their films. There have been mixed results with an awful version of The Lion King and an amazing version of The Jungle Book. Maleficent set the bar high for the telling of these bad girls’ origin stories, and it’s going to be hard for Cruella to match up. Did it even come close? I’m glad that you asked.

Cruella (Stone) herself narrates the film. We go all the way back to her birth and the shock of her iconic half white/half black hair. We catch a montage of various stages of her growing up where we learn she is somewhat of a split personality. There’s the nice Estelle who wouldn’t hurt a fly, and then there’s her playful and malicious Cruella, who acts somewhat as Estelle’s protector by finding fiendish ways to get back at her tormentors. The hair makes for a lot of teasing and bullying. When she finally comes of age, she dreams of becoming a fashion designer and working for the company Liberty, which is run by the Baroness (Thompson). Until she can get that lucky break, she hooks up with Jasper (Fry) and Horace (Houser), and they become a good team. Their specialty is theft, and they bond over their Artful Dodger-esque lifestyle. She finally gets her lucky break, only to discover that her idol isn’t such a nice person. If you wanted to know how Cruella got some of her signature behaviors, you need look no farther than the Baroness. She’s abusive to her staff and takes credit for anything good they might come up with. Cruella is willing to put up with the abuse to get noticed by her idol. When she finally gets to the inner circle, she learns a truth that is connected to her dead mother, and it brings out Cruella after years of being rather dormant.

This is when the film really gets more interesting. Cruella sets out to announce herself to the world by sabotaging Liberty’s events in grand fashion with the help of cooperating reporter Anita Darling (Howell-Baptiste). If the name rings a bell, don’t worry; we’re going to get there. Before long Cruella is this huge underground personality that no one can quite catch. Estelle, who has taken to wearing a red wig, hides her nocturnal “partner” in a kind of Clark Kent/Superman way. When the wig is on she’s demure Estelle, but when the wig comes off? “She’s like a spider waiting for the kill.” While the story was certainly more interesting than I anticipated, it isn’t the plot that will win you over. This is a phenomenal cast that delivers such wonderful, and sometimes wicked chemistry. Don’t get me wrong. The production design is wonderful, and the story gives us pretty much what we want. There are those moments that fans of the original film will get to smile about. Little connections that will fall on your lap if you’re paying attention. But it’s the cast that won me over. There isn’t a weak link in the bunch.

“Not a lot of fun when the Krispies are on the floor.”

Emma Stone is wonderfully nuanced as Cruella. This is the kind of performance that is loaded with foreshadowing but never rushes to the point. Stone has always been good, but she’s never been better. You can tell she’s having a ball, and every time she lets Cruella out you can actually see it in her eyes the moment she switches. This is the kind of performance that should rate an award but likely won’t because of the movie itself. Just when you think you’re satisfied watching her interact with her criminal friends, she comes face to face with what is basically her future self. The chemistry between Emma Stone and Emma Thompson takes over the entire screen, and there’s no denying that when they are together, nothing else matters. This is The Emma Show all the way. It’s like a double scoop of your favorite ice cream.

But in case that’s not good enough for you, there’s Paul Walter Hauser, who just came off a great performance as Richard Jewel in Clint Eastwood’s film. He and Joel Fry are like the sprinkles on top of your double-scoop ice cream cone. They become some of the heart in the film that attempts to anchor Cruella emotionally. They’re friends with Estella and love her incredibly, but they’re a bit frightened of Cruella and do her bidding less out of loyalty and more out of fear. But sprinkles aren’t enough if I’m going out for ice cream. I’m going to want the waffle cone coated with white chocolate. That’s where Mark Strong comes in. He’s been on fire lately with 1917, The Kingsmen films, and Shazam. Add this to a good run of compelling characters. He’s valet to the Baroness, but he knows the big secret, and he’s going to be the fly in the ointment. Here he’s strong and mostly silent but with a ton of heart. Make that a double-coating of white chocolate. There’s got to be a little sundae sauce in there, and that’s where Kirby Howell-Baptiste comes in. She takes a relatively small part and stakes out her claim to the story. She’s the kind of actress you forget about for a few minutes, and then there she is, that spoonful of marshmallow/peanut butter sundae sauce. Finally I’m going to need a little whipped cream to top it off. That’s John McCrea playing the eccentric Artie. He runs a dress shop that caters to the extraordinary tastes. Grab a napkin and dig in, because this might not be the best food for you, but it’s going to taste so good, and it’s going to be a really fun ride.

If that’s not enough for you, let’s supersize that with another scoop of ice cream. The soundtrack of this film is as entertaining as everything else. You gets songs from across generations with ELO, Queen, Supertramp mixed in with stuff from the 40’s. These needle drops really tie it all together and keep you in the mood for what is a somewhat more stylish film than I expected, including a rendition of the Shermans’ song if you stick around for a mid-credit scene that will reward the original animated feature’s fans. With all of that going on, this is certainly a chance to return to the cinema and remember what it was like to have fun. The film might be a little overlong at 2 hours and 14 minutes, but I’ll forgive them that flaw if someone hands me another napkin. “How can you not get caught up in all this?”

Gino Sassani is a member of the Southeastern Film Critic's Association (SEFCA). He is a film and television critic based in Tampa, Florida. He's also the Senior Editor here at Upcomingdiscs. Gino started reviewing films in the early 1990's as a segment of his local television show Focus. He's an award-winning recording artist for Omega Records. Gino is currently working on his 8th album Merchants & Mercenaries. Gino took over Upcomingdiscs Dec 1, 2008. He works out of a home theater he calls The Reel World. Favorite films: The Godfather, The Godfather Part II, The Body Snatcher (Val Lewton film with Karloff and Lugosi, not the pod people film), Unforgiven, Gladiator, The Lion King, Jaws, Son Of Frankenstein, The Good, The Bad And The Ugly, and Monsters, Inc.
The Mothman Prophecies (Blu-Ray) Supernatural: The Fifteenth and Final Season (Blu-ray)