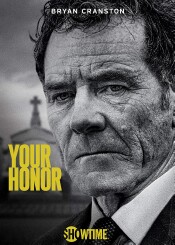 “Months from now, if you’re ever asked where you were, what you were doing, on October 9, you’ll have the muscle memory of what you did. You won’t have to construct the lie, because you lived it.”

We all live that day in somewhat excruciating detail. I’m talking about the opening 20 minutes of Showtime’s limited series Your Honor, starring everyone’s favorite high school chemistry teacher, Bryan Cranston. The ten-episode crime thriller/drama was developed by British television wunderkind Peter Moffat and took a rather long route to this American release. It’s based on an Israeli series called Kvodo and was originally remade in India before finally taking a shot in America via a British writer. I have not had the opportunity to see either of the earlier incarnations, so I can’t really comment on how faithful this version might have been. Beyond a strictly academic purpose, what’s important is how this series stands on its own. And that analysis is just as complicated as the path the material has taken around the world to your television … or, God help us, your phone.

In the first 20 minutes we meet Adam Desiato, played by Hunter Doohan (no relation to that lovable starship engineer). It begins normally enough. He’s apparently spent the night with his girlfriend, Frannie (Black). Pretty normal stuff until we discover that Frannie is also one of his high school teachers. He gets up, takes a photograph of his mother and some flowers, and gets into his car. You see, this is an important day for the Desiato family. It was a year ago that day, October 9th, that his mother was killed outside of a bodega in a rather poor neighborhood of New Orleans. He’s there to place his little memorial and leave. But he’s a bit panicked by the gathering of several youths in the neighborhood and leaves as quickly as he can. The panic brings on an asthma attack, and his inhaler rolls onto the floor. Reaching for the inhaler, he takes his eyes off the road long enough to hit a kid on his motorcycle. It’s bad. The young man is choking on his own blood, and while he calls 911, Adam is unable to speak with his struggling breathing. He runs. The boy dies.

Intercut during this brutal 20 minutes of horror is the sight of a man jogging in the morning. He’s Judge Michael Desiato, and he’s Adam’s father. He’s horrified when his son explains what has happened and convinces his son to turn himself in. They go to the police to do just that when the walls close in on the Desiato family. They see the grieving parents, and the boy’s father is Jimmy Baxter, played by Boardwalk Empire’s Michael Stulbarg. Fear sets in, and the plan to turn Adam in gets dumped quickly. Baxter is New Orleans’ mob boss, and he would have his own way of dealing with the kid who killed his son on his birthday with the motorcycle his dad had just given him. The judge realizes Adam’s dead if he’s found out, and the ten-episode-long attempt to cover it all up begins.

The first episode is compelling television from start to finish. The opening 20 minutes is like something out of a high-end horror or thriller film. There’s almost no dialog during the entire time, and what you see will shock you, and it will pull you into this story like few series openings ever have. The trouble is that it’s all downhill from that point on. The series becomes too ambitious for the limited amount of time it has to tell the story, and that leads to too many short cuts, really stupid decisions, and too many characters and relationships to truly serve before it all comes to an end. It’s the kind of thing that would have worked well if the tension and build-up were allowed to develop and keep us so emotionally engaged. Instead it all pretty much starts to unravel by the opening moments of the second episode.

Michael’s attempt to cover the crime includes having the car destroyed, and so he turns to Clay … I mean Charlie, to take care of it. But the kid who takes the car to crush it gets caught before he can complete the deal. He’s a small member of a black gang family that is a huge rival to the Baxter family. He’s convinced to admit to the crime to protect the gang, but that leads to warfare between the two gangs. The result is a mother and her young kids being killed, which leads to more guilt on Michael and more pressure from the cops to unravel this enigma.

Let’s start with the cast of characters and actors. The top of that list has to be Bryan Cranston. Judge Desiato is a much more nuanced character than his Breaking Bad character, but Cranston manages to create a ton more emotion and complex performances here than he could ever do on Breaking Bad. And that’s saying something right there. He’s one of the producers and obviously quite invested in the show and the role. The supporting cast is also strong, starting with an underused Isiah Whitlock, Jr. as Michael’s best friend and mayoral candidate, Charlie. Whitlock steals every scene he is in, and that’s no surprise. He’s been doing that since his iconic corrupt councilman Clay Davis in The Wire. He’s full of energy, and the character is so dynamic that we miss him when he’s not there, and that’s a lot of the time. But that’s the big problem here. There are too many good characters who don’t really get a chance to hit their stride.

Even characters with adequate screen time never really get a complete story arc. Sofia Black-D’Elia plays the teacher who has an affair with Adam, but she’s really relegated to a jealous girlfriend later in the show, and doesn’t fulfill the importance promised by the opening liaison. She’s a small inside joke as Michael thanks her for helping bring Adam out of his shell, but it’s too much investment for just a wink at the audience from time to time. Carmen Ejago plays an attorney who Michael convinces to help out the kid who pleads guilty to the crime. He does this out of guilt, but there’s a romantic thing going on that the writers just couldn’t really see through to fully define. Amy Landecker plays a detective with a relationship with the judge who he kind of invites into the investigation but keeps at arm’s length when things start going bad. This is a strong character who never gets enough runway to get off the ground. Unfortunately Hunter Doohan, who has to carry the weight of it all, is the weak link in the cast. I don’t know much of his work, so I won’t go so far as to say he’s a bad actor. It could be he was horribly miscast or just wasn’t given the kind of meat he needed to do anything here. He just appears to be phoning it in after that first dramatic material in the first episode. It doesn’t help that the poor writing has him doing things that just don’t add up. He ends up dating the daughter of the kid he killed without telling her who he is.

The other true standout, however, is Michael Stuhlbarg, who plays the wonderfully glowering mob boss who wants to get revenge for his kid. He does get a nice evolution, and he’s the only character who does. He starts as the grieving father, then the rather hen-pecked husband pushed into retaliation against the family he thinks is responsible, and then after learning at least part of the truth, the guy who makes a deal to save his other son. All the while Baxter is the most interesting thing going on … at least when Isiah Whitlock, Jr. isn’t on the screen.

The ten episodes come on three discs with no extras. The series ended up having a ton of wasted potential. I was quickly drawn in and then just as quickly left on the outside. This might have been better as a film with a lot of the chaff removed for a tighter story. This is also the first film or series I’ve seen to deal directly with a COVID world. The court talks about social distancing, and a few characters wear masks. I’m sure many shows have dealt with the new reality already, but I don’t see them until their home video release and review. Something is missing here, and if they backed off a longer original story, it was a really bad idea. “Why’d they do that?”

Gino Sassani is a member of the Southeastern Film Critic's Association (SEFCA). He is a film and television critic based in Tampa, Florida. He's also the Senior Editor here at Upcomingdiscs. Gino started reviewing films in the early 1990's as a segment of his local television show Focus. He's an award-winning recording artist for Omega Records. Gino is currently working on his 8th album Merchants & Mercenaries. Gino took over Upcomingdiscs Dec 1, 2008. He works out of a home theater he calls The Reel World. Favorite films: The Godfather, The Godfather Part II, The Body Snatcher (Val Lewton film with Karloff and Lugosi, not the pod people film), Unforgiven, Gladiator, The Lion King, Jaws, Son Of Frankenstein, The Good, The Bad And The Ugly, and Monsters, Inc.
Indiana Jones 4-Movie Collection (UHD Blu-ray) (4K) F9: The Fast Saga