A Place in the Sun (Blu-ray)

Posted in: No Huddle by Brent Lorentson on August 27th, 2021 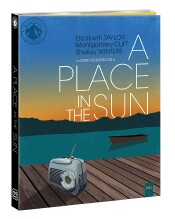 1951 was a year that spawned some major classic films. There was An American In Paris, A Streetcar Named Desire, The African Queen, and A Place In The Sun. Of the four mentioned, the one I hadn’t seen and honestly was oblivious to was A Place In The Sun. While I do appreciate many classic films, I don’t have an answer for my ignorance of the film, and with a stacked cast of Montgomery Clift, Elizabeth Taylor, Shelly Winters, and Raymond Burr, I was more than happy to check out this film and review it on its 70th anniversary. I went into this film knowing as little as possible, only knowing about the cast and the director George Stevens, a man with an impressive resume as a director as well as a cinematographer. This only flummoxed me further about how this film had managed to escape me for so long.

The film opens up with George Eastman (Montgomery Clift) hitchhiking along the side of a busy highway. Behind him we see a large billboard advertising Eastman swimwear. At the time we don’t know that George’s uncle is the owner of the company, nor do we recognize the significance of the imagery. Before a word is even spoken,, the director has already given us so much and we don’t even realize it. It’s because of this I’m already looking forward to revisiting this film, but I’ll try not to get ahead of myself. George has made this big move to get away from his poor family and hopefully find success in his uncle’s factoryThe uncle does care about family but also doesn’t believe in handouts, and this is how George winds up on the factory floor where he meets Alice Tripp (Shelly Winters). There’s a policy about dating coworkers, but the two budding lovebirds do their best to keep their relationship a secret. Everything is going smoothly, that is until he meets Angela Vickers (Elizabeth Taylor) at a high-society dinner. Is this a romance that simply melds into a story of a man that falls in love with two women? Well, in simple terms, yes, but this film shows just how complicated things can get when you are in love with two people, not to mention struggling to move ahead in society.

In the beginning it’s easy to root for George. We can appreciate his struggle with loving two women, and there is nothing wrong with him only wanting to have a successful career. To a point we can even understand and forgive George for wanting to move on from Alice and be with Angela, but then we get sideswiped by the knowledge that Alice is pregnant and she wants to marry George. This would obviously derail his relationship with Angela and possibly even his career. Even though this was released in 1951, the story is relatively timeless as we see these same kind of relationship drama’s unfold in reality TV and in tabloids. The only major difference is how society views morals  and how they’ve changed over time. What I wasn’t expecting is how the tone of the film continues to get darker and plays with morals as George continues down a slippery slope of indecisiveness and the consequences that follow.

While the film is barely over two hours, it does feel a bit longer. The story definitely takes its time with unfolding, but I can’t think of a single moment that could be cut from this film.  Every moment counts, and I feel the pacing helps illuminate just how often George had the opportunity to make a concise decision, and at the end of the day he is guilty for how things turn out. The direction of this film is pretty incredible. I mentioned about the opening scene. As the film continues to unfold, you’ll see several shots that linger a bit long or perhaps the dreamlike dissolves that occur. These are all decisions made that help piece this film together and have a way of involving the viewer to piece together the clues to see how this film will end.

Then there are the performances; this is the kind of film that shows off Hollywood royalty before they were mega-stars and shows they were more than just pretty faces.  Montgomery Clift manages to play the jerk with so much compassion you can’t help but empathize with him, and at one point I totally supported his actions despite how scumbaggy they had been.

As for Shelly Winters, she has the more complicated role that goes from being the object of George’s affection to a scorned lover to … well, I don’t want to spoil anything, but I’ll just say it complicates how you may feel about the character and what George wants with his life. I really enjoyed watching Winters in this role. She seems so effortless, and in a scene where she’s waited up all night to celebrate George’s birthday and she unburdens her thoughts to him, just engaging. I feel this performance would resonate with many women even today.

As for Elizabeth Taylor, it’s no wonder she became a starlet. The camera simply loves this woman. She plays this role with such virtue, she pretty much represents everything George could ever dream of, but alas, dreams are simply always just out of reach. The delivery of one of Taylors last lines in the film to George is one that will stick with me. To just write the line wouldn’t do it or the scene justice, but it’s the delivery that mostly sums up the entire film for me.

While I can’t say the film is perfect, I just can’t find anything I really disliked.  It’s a film I know I’ll revisit, but it’s not a film I’d run out and recommend to friends. This is definitely a film for the serious cinephile or the one-day film student. There is a lot one can pull from this film. The way shots and scenes are crafted in this film show the audience that there is an art to being a director, and it shows that the right director knows that a good film is more than just a pair of good-looking faces talking on screen for two hours. A Place In The Sun is a film that rightly earns its title of being a classic and hopefully will continue to entertain audiences for many more years to come.

Brent Lorentson is a horror writer and film critic based out of Tampa, Florida. With a BA in Digital Film, he co-wrote and co-directed Scavenger Hunt. His short stories have appeared in various horror anthologies. In 2019 his short script Fertile Blood will be a part of the anthology horror film Slumber Party. He is currently working on his first novel A Dark and Secret Place set to be released in late 2019. Favorite Films: Taxi Driver, Fight Club, I Saw the Devil, The Wild Bunch, Dawn of the Dead, A Clockwork Orange, Pulp Fiction, Heathers, The Monster Squad, and High Fidelity.
The Night House A Discovery of Witches: Season 2 (Blu-ray)