Posted in: The Reel World by Brent Lorentson on September 3rd, 2021 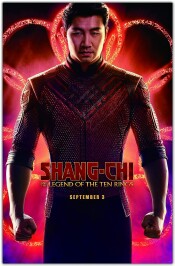 As fans of the MCU, I think it’s safe to say we’ve all been anxiously waiting to see what Phase 4 would be bringing us. In a lot of ways this is the new era of Marvel characters and a new story arc that will be kicking off since Endgame seemed to wrap things up.  Disney Plus as been teasing fans and tiding us over with Wandavision, The Falcon and the Winter Soldier and then Loki. On the cinematic front we had the long delayed Black Widow, but considering that film took place in a pre-snap timeline, the question remained, what was next for the Avengers?  With Shang-Chi and the Legend of the Ten Rings, we finally get that answer, and as exciting as that is, I have to admit I’m a little worried. I’m not saying it’s time to abandon ship, because I’ll be upfront and say I enjoyed Shang-Chi, but the Disney influence  is starting to rear its head, and I’m a little concerned for how much influence studio heads are having over the product and how much control is being taken away from the creative heads, i.e. the writers and directors.

The legend behind the ten rings is relatively simple; who ever wears and wields the rings is given godlike powers of strength and immortality. For 1000 years Xu Wenwu (Tony Chiu-Wai Leung) has had control of the rings and has led his army and taken on all challengers. I love the time spent with this character as we see him as a vicious leader and then his attempt to enter a magical city stopped by one of the cities’ protectors. This is the first defeat Wenwu has had in his 1000 years, and how he handles this loss, well, it was refreshing. We get more of Wenwu’s journey over the course of the film, and to be honest, I wish the film was all about this character, because this is really one of the most fleshed out “villains” we’ve gotten to see in the MCU. The arc we see the character go through definitely humanizes him. We see him as an immortal who finds love and attempts to go down a road of redemption, and then all that is taken from him. And this is all background story that’s shown to us in a series of flashbacks. Normally it’s something I’d be annoyed with, but I genuinely enjoyed this back story more than the rest of the film, and it’s due mostly to the great performance Leung delivers.

As for the star of the film, Simu Liu, who plays Shaun, who when we meet him is a bit of an underachiever who works as a valet driver with his best friend Katy (Awkwafina).  The friendship between Shaun and Katy is a somewhat of a big deal, and I’d almost call this a buddy film, because these two are pretty much inseparable over the course of the film. Thankfully the chemistry works between the two actors, and it’s actually fun watching this pair on screen together. It’s not until there is an out-of-nowhere confrontation on a city bus that we see that Shaun has some intense martial arts skills, and Katy is basically a disaster behind the wheel of the bus as an intense fight unfolds.  It’s not long after that Shaun comes clean to Katy and confesses that he was a trained assassin and that his father is after him as well as his sister. We’re right alongside Katy with the surprise of this back story, but it’s what kicks off this adventure for the two, and we discover Xialing (Meng’er Zhang) is a bigger badass running her own underground fight club.

At its core, the film is about family bonds and betrayal and how friends can bond to you as family more than your own flesh and blood. This has been a running theme we’ve seen in numerous Marvel films, but this time it seems to be more of the focus. For those who saw Black Widow, the family theme of coming together despite differences may seem a little redundant, but upon closer examination a lot in this film feels a bit redundant. The hidden magical city of Talo seems like nothing more than the Asian version of Wakanda, even with its own armies and customs. There is a lot about this film that had me taking my own flashbacks to Black Panther, even story beats that are in the same film, and it had me wondering how much of this was by design attempting to piggyback off that film’s success and how much I was just reading into it. It feels like the answer is somewhere in the middle.

My biggest gripe, though, is with how the action scenes are handled, at least in the sequences before the film’s last battle. I feel like this was the movie that should be showcasing some of the best martial arts fighting, and while there are some fun scenes, there just isn’t a fight sequence that genuinely wowed me. When you look at films like The Raid, or The IP Man films, sure, the bar has been set high, but Marvel has the deep pockets to put something together that could have been jaw-dropping, and it wasn’t even attempted. This is where I wish a more seasoned action director was hired, or at least one who has more experience with action films. I’m not saying that director Destin Daniel Cretton did a bad job; in fact most of the film is beautifully done and actually has a distinct look that I feel separates it from the numerous factory-line films that are churned out. Having veteran DP Bill Pope was a move that helped make this film look as beautiful as it does, and I do appreciate the vision we got with this film … But the studio still handicapped themselves by not hiring someone with a strong background with directing action scenes. Sure, Bill Pope has shot some of the coolest action stuff from The Matrix to Baby Driver, but it’s not his job to choreograph fights and set the stage for these fights. Though I’m a little annoyed they attempted to rip off the epic SkyFall fight. Come on, did you think we wouldn’t notice?

At the end of the day I still enjoyed this film, and it’s easily one of the best looking films in the MCU. I’d say Captain America: The Winter Soldier might edge it out, but I still adore the look of this film. The chemistry with the actors and the great villain are all things stacked in favor of this film, but what worries me is how much it seems the story seemed to go to the well of previous films to flesh out this story. Sure, there are fun moments that set up the future of this phase of the MCU, but I’m just not sure how well it will resonate. I hope there is a chance to dive deeper with these characters. It seems they definitely will be important in films to come, but I’d like to see them flourish in their own film and dig deeper into their magical world.

Brent Lorentson is a horror writer and film critic based out of Tampa, Florida. With a BA in Digital Film, he co-wrote and co-directed Scavenger Hunt. His short stories have appeared in various horror anthologies. In 2019 his short script Fertile Blood will be a part of the anthology horror film Slumber Party. He is currently working on his first novel A Dark and Secret Place set to be released in late 2019. Favorite Films: Taxi Driver, Fight Club, I Saw the Devil, The Wild Bunch, Dawn of the Dead, A Clockwork Orange, Pulp Fiction, Heathers, The Monster Squad, and High Fidelity.
The Water Man (Blu-ray) Occupation: Rainfall (Blu-ray)