Posted in: Disc Reviews by Gino Sassani on September 30th, 2021 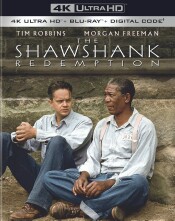 “I must admit I didn’t think much of Andy first time I laid eyes on him; looked like a stiff breeze would blow him over. That was my first impression of the man.”

Our first, middle, and last impression of writer Stephen King has always been one thing. He’s considered the King of the Modern Horror Novel. Pretty much everything he has ever written has found its way to the small or large screen and often with various versions over the years. The problem is that King is such a visceral writer, and his novels tend to be so long that it’s very difficult and damn near impossible to translate a good King story for television or the box office. No matter how hard some of the best filmmakers have tried, an alarming number of King’s written masterpieces have fallen flat at the box office. There have, of course been notable exceptions. The recent two-film version of It is one of the finest of those attempts. But for nearly three decades it turned out that the most successful film adaptations of King’s written work weren’t horror stories at all. They were also based on shorter works instead of those multi-thousand-page novels. Stand By Me, based on the novella The Body, is one of the most endearing and enduring, and while a title like The Body certainly carries the King ominous connotations, it’s actually a quite unscary coming-of-age story. The Green Mile took us to death row, not for a story about a demented killer about to seek revenge as a reanimated executed criminal, but a whimsical fantasy about a death row guard with a rather amazing pet mouse and accompanying story. But perhaps the greatest of this trilogy of King non-horror dramas is likely The Shawshank Redemption, based on the novella Rita Hayworth And The Shawshank Redemption. It remains the favorite film of my wife, and while it’s not even in my top ten, it is certainly my favorite King adaptation and a wonderful film in its own right. It’s about time this wonderfully atmospheric film got a 4K treatment and a release on UHD Blu-ray.

“I could see why some of the boys took him for snobby. He had a quiet way about him, a walk and a talk that just wasn’t normal around here. He strolled, like a man in a park without a care or a worry in the world, like he had on an invisible coat that would shield him from this place. Yeah, I think it would be fair to say … I liked Andy from the start.”

Tim Robbins stars as Andy Dufresne, a banker who has been wrongly convicted of killing his wife. When he enters the hard steel walls of Shawshank Prison, he’s about as much out of his element as any man ever was in prison. He comes to the attention of two people who will shape his prison experience and ultimately his life. The first is the not-wrongly-convicted killer Ellis “Red” Reddington, played by Morgan Freeman. Red has mellowed from the angry man first convicted and has learned to accept his fate. He ends up standing out as one of those prison inmates who can get anything for you … for a price. The second influence is Warden Norton, played by Bob Gunton. The warden is a Bible-carrying holy man on the surface but has been lining his pockets with some good old-fashioned fraud and embezzlement on the down low. When he discovers that Andy is a whiz at finance, he recruits him to help set up paperwork to hide his crimes. It’s an arrangement Andy appears fine with until proof comes out of his innocence and the warden covers it up to keep his slave labor accountant under his thumb and in his prison. All bets are off, and Andy decides it’s time to make other living accommodations on the outside. He sets off on a patient plan that involves the original story’s titular reference to Rita Hayworth.

The true heart of the film won’t be found in the details of the story. King’s work endures because he has a knack for creating great characters who ring true. To translate that to the screen, you have to have a few extra elements fall into place. You have to have a director who understands character and can get those emotional performances. Whatever Walking Dead fans might think of Frank Darabont and his issues with the birth of that show, he’s a very insightful director. King saw that immediately and offered Darabont the film rights on the cheap. He obviously saw that his characters as much as his story were in safe hands. They would continue to have a great relationship, with Darabont directing two other King films with a much higher degree of success than average. Both The Green Mile and The Mist are standout films. And I think it’s all because Darabont gets King’s characters.

A good script and director aren’t enough, however. The right actors have to be cast for the right roles, and there has to be enough chemistry there to make their relationship and story compelling to the viewer. We need to have something strong enough to engage our attention even when the film might be slowing down. Tim Robbins isn’t going to make anyone’s list of dynamic actors. He’s fine, but I can’t say he’s in my top 50. But here he is perfectly cast because of his ability to play the character softly and through nuance. With Andy everything relies on a certain little smirk or the way he tilts his head. Add Morgan Freeman, and the two end up forming the perfect partnership. These characters are believable, and we are engaged with them enough to take this entire ride and be entertained throughout. It’s what some folks in the industry refer to as heart.

Shawshank Redemption is presented in its original aspect ratio of 1.85:1. The ultra-high-definition image presentation is arrived at with an HEVC codec at an average of 50 mbps. I love it when you have a film originally shot in 35mm film. That means you already have a native 4K source, and when you add this kind of production design and cinematography, you end up with about as perfect an image presentation as you could ask for. Immediately the sharpness presents itself when you see Andy exit a prison building in the rain. The wet stone of the building surface looks like you could reach out and touch it. There’s wonderful contrast because of the HDR boost that you get excellent definition even in the many dark scenes. Character close-ups offer truly startling clarity, from skin texture to facial hair. There isn’t a lot of color here, and whatever is here is intentionally muted, but from time to time those subtle color splashes manage to assert themselves. This transfer preserves the necessary organic nature of the film’s atmosphere. That’s something we didn’t really get in the Blu-ray release.

The Dolby TrueHD 5.1 track isn’t quite an impressive upgrade, but then again less was needed in the film’s audio presentation. The audio is there to serve the dialog, which is the heart of the film. We get pretty solid depth to the dialog, and it’s all clear and perfectly placed. Source music provides some of the few audio bumps, and they also sit nicely in the entire tapestry of sound. Of course, you’ll get a bit of surrounds working with the echoes of prison walls and clanks of doors opening and slamming shut. But all of that is atmosphere. This is a solid, serviceable audio presentation from beginning to end. No bells and whistles, and a weaker sub  response than I would have liked, but it works for the film just fine.

The only extras are imported from the previous Blu-ray release and are not upgraded in audio or video.

This is a film that ages very well. It’s just as dynamic and compelling as it was in 1994. It’s somewhat timeless in the material and will likely endure far longer than King’s more iconic horror films. It was nominated for seven Academy Awards, and while it did not win a single one, it belonged in that conversation, including its nomination for Best Picture and Freeman’s nomination for Best Actor. There’s no doubt it should have won its nomination for Best Cinematography. These aren’t the kinds of awards you usually associate with a Stephen King film. Maybe we should. “Hope is a good thing, maybe the best of things, and no good thing ever dies.”

Gino Sassani is a member of the Southeastern Film Critic's Association (SEFCA). He is a film and television critic based in Tampa, Florida. He's also the Senior Editor here at Upcomingdiscs. Gino started reviewing films in the early 1990's as a segment of his local television show Focus. He's an award-winning recording artist for Omega Records. Gino is currently working on his 8th album Merchants & Mercenaries. Gino took over Upcomingdiscs Dec 1, 2008. He works out of a home theater he calls The Reel World. Favorite films: The Godfather, The Godfather Part II, The Body Snatcher (Val Lewton film with Karloff and Lugosi, not the pod people film), Unforgiven, Gladiator, The Lion King, Jaws, Son Of Frankenstein, The Good, The Bad And The Ugly, and Monsters, Inc.
F9: The Fast Saga – Director’s Cut (UHD Blu-ray) (4K) The Many Saints of Newark