Posted in: Disc Reviews by Jeremy Butler on November 5th, 2021 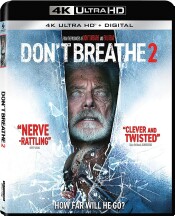 Well, this is an interesting plot twist. From antagonist to protagonist. When we last saw Gulf War veteran Norman Nordstrom, he was recovering in the hospital from a gunshot wound, having just spent the previous night protecting his home against intruders. Before you start painting him with a hero brush, it’s worth mentioning that Norman isn’t exactly squeaky clean, given that he was holding a woman hostage after artificially inseminating her to provide with a child to replace the one that said woman accidently killed. It’s also worth mentioning that he also attempted to impregnate one of the home invaders following the inadvertent death of the woman carrying his child. The first Don’t Breathe was an interesting and unique horror thriller film that premiered at South by Southwest festival back in 2016 before going on to become a theatrical commercial success.

Hence the need for a sequel. Initially, I had a great deal of reservation about continuing the story, as I figured it was like trying to get lightning to strike the same place twice. Which it did. That said, I was intrigued to see the character to take on more of an anti-hero role, as he wasn’t technically a villain in the previous film, making this transition easy to accept and believable. Don’t get me wrong, he did some depraved things, but these were clearly the acts of a man driven deranged by grief. I’m not saying that he is deserving of redemption; I mean, between this film and last one, he chalked up a body count. And without question, he is somewhat self-serving, especially since his relationship with Phoenix is all about filling a hole left in his life following the death of his daughter. However, he does manage to show great protective instincts and a willingness to put his own life on the line to save an innocent, so he isn’t exactly a monster, either, despite what the character may believe about himself.

The events of this film take place eight years after the first film. Nordstrom is living in a Detroit suburb with a little girl named Phoenix. Now if you are like me, your first thoughts are revulsion, as my initial belief was that he carried out the methods he previously employed in efforts to get a replacement child. Fear not; that isn’t the case this go-around. The events of how this little girl came to be in his care are the film’s main focal point, as people from her past come looking for her, and are willing to get her back by any means necessary. And given what we already seen Norman Nordstrom capable of, it’s a safe bet he is willing to go just as far to keep her.

For the me, the biggest thing the film needed to deliver on was the suspense. In the previous film, this was created by the intruders being plunged into darkness, thereby evening the playing field with Nordstrom. It’s all in the title: don’t breathe. The film builds on the idea that sight works against us while those without sight have had to learn to survive without, giving them an advantage. So how was the film going to deliver on that concept? By arranging events to create a similar setting, thereby delivering the suspense and level the playing field for the Nordstrom character. This made for some good action sequences, particularly the final showdown, where Nordstrom shows his ruthlessness with a particularly gruesome execution.

Stephen Lang was the right choice for this character who is capable of great violence as well as affection. The relationship between his characters and Madelyn Grace’s Phoenix gives depth to a character that before this could have been considered one-dimensional. Lang does a good job of maintaining the balance of the character, his tenderness and his physicality. It was hard not to feel for the character as he is forced to confess his sins in manner of speaking, and the soft-spoken nature plays well towards the film’s climax.

Don’t Breathe 2 is presented in its original aspect ratio of 2.39:1. The ultra-high-definition image presentation is arrived at with an HEVC codec at an average of 60 mbps. I have to say I do not believe it’s going to matter between the Blu-ray and the UHD here. Like the first film, this one often takes place in complete darkness. You are not intended to really see details of the surroundings and action. Those few pulses of light throughout aren’t going to be significant enough to make this one pop. The best that the HDR offers is some nice contrast and very good contrast in a couple of the scenes that involve a fiery explosion. You do get some very vivid flames and brilliance. But is that enough to make a difference. I think that’s why the usual Blu-ray copy is not provided here. I don’t think they want you to really compare them side by side.

The Atmos track defaults to a pretty much average 7.1 mix. This is a rather claustrophobic film, so surrounds aren’t really going to be that aggressive. There are those creaks and squeaks that are often intended to prepare you for a jump or to misdirect your attention. In that way they are pretty effective, but there’s nothing all that dynamic going on here. Even dialog sometimes gets lost, but it’s intended to be that way. When you judge an audio presentation on source material that is intended to me muddled, it’s hard to be fair to the release transfer over the intentions of the filmmakers.

Friends And Filmmakers: (4:46) The brief feature explores the two main characters and the actors who portray them.

Designing Deception: (5:07) A look at the production design with a focus on the house used in the film.

Things are left a bit ambiguous, with the door being left firmly open for another potential installment into the franchise. While I did enjoy this sequel, I must say that I am a strong skeptic that another addition to this series is necessary. I won’t say that it is impossible, especially with the guys behind the success of the first two films involved. But lightning has already struck twice, it would be very difficult to get it to do so a third time.

Jeremy Butler is a film school graduate of the International Academy of Design and Technology. He is been writing for Upcomingdiscs since 2012; however, movies have played a big part of his life for much longer. Favorite genres include horror, science fiction/fantasy, and comedy. Favorite movies are V for Vendetta, Boondocks Saints, Kiss Kiss Bang Bang, and The Godfather.
The Original Christmas Specials Collection (Steelbook) (Blu-ray) Eternals