Posted in: Disc Reviews by Brent Lorentson on November 17th, 2021 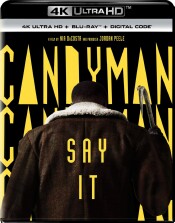 From Bride of Frankenstein to Night of the Living Dead and even Godzilla, horror has been a platform filmmakers have used for decades to handle larger societal issues. In 1992 when the first Candyman released, it was a film that tackled issues of class and race, but it did so in a manner that didn’t feel forced, and in doing so it added an extra level to what I’d consider one of the best horror films of the 90’s. I love the story of Candyman, and the performance Tony Todd gave this tragic character was an equal blend of horror, menace, and sympathy. The way the first film builds its impending doom for Helen Lyle has rarely  been matched in films since. Watching as her life crumbles around her up until the moment she finally surrenders herself to Candyman and accepts her awful fate is an impactful moment. The sequels just never lived up to the first film, and it’s a shame, because I simply loved the idea of this modern urban legend that haunted the projects of black America. Candyman and the tragedy of Daniel Robitaille deserves better. As much as I love Friday the 13th and several other franchises in the horror genre, Candyman has always been the character ripe with so much untapped potential that I’m surprised it’s taken this long to get the reboot/sequel it rightfully deserves. Though the moment I saw that Jordan Peele was involved, I started to worry.

I’m being upfront and saying I just don’t like Jordan Peele when it comes to horror. It’s like when Michael Bay started up his horror company and churned out The Texas Chainsaw Massacre. Horror just isn’t for everyone to dip their toes into, and I don’t care about what awards films may get or what box office it may gross; I’m not going to cave to the bandwagon. That being said, I’m more than willing to give a film a chance if the trailer can hook me or if I care about the property, so with Candyman this was one I was on the fence with. I was ecstatic about seeing this character back on the screen, but I was still cautious, because it was being helmed by Nia DaCosta, a director with no experience in the horror genre. As it would turn out, she’s a director who shows plenty of talent and promise, but can’t build a moment of tension even with all the tricks and tools of the industry at her disposal.

It is 1977 when the film opens up in the familiar territory of Cabrini Green. The only white people around are a pair of cops sitting outside the Cabrini towers. A young boy is on his way to do some laundry when we he sees a suspicious figure lurking behind a hole in the wall. Apparently someone in the neighborhood has been giving kids candy with razor blades in them, a guy nicknamed the Candyman.  The boy obviously is startled, and this gets the attention of the cops. Jumping ahead to 2019, Cabrini Towers have been taken down, and the area is the latest statistic of gentrification. We meet Anthony McCoy (Yahya Abdul-Mateen II), an artist who is struggling to create a new collection, until he hears the story of Candyman and a woman doing research on urban legends. He’s inspired and creates a morbid but kind of cool exhibition piece for an art show, but little does he know that he’s also about to revive the legend of Candyman.

The first third of the film works well at setting up the story and introducing us to the main cast of characters. There are some cool visuals, a lot of camera shots involving reflections. The first kill in the film is perhaps one of the better moments, as is a school bathroom sequence later in the film. I also liked the idea of seeing Anthony digging into the past and uncovering the legend and even hearing a new take on the legend involving a man beaten to death after being wrongfully accused. The seeds of potential are definitely there for this film to work, but once people start saying the name Candyman in mirrors and the killing begins, well, the film starts to fall flat. The problem with this film is there just is no tension; even in spots where we get a little bit of buildup, it gets ruined with a cheap joke.

To be fair, perhaps this movie was nothing but a joke to the writers. After all, it seems Candyman’s preferred victims in the film are those who are critical of Anthony’s artwork.  The more I think about the film, it just seems as though they just wanted to pick and choose what they liked about the original film and then basically weaponize the character to kill white people and cops. The idea the filmmakers go with is that “Candyman” is spawned when an unjust crime occurs, and it’s through fear and gossip in a community that he is spawned. That’s fine, but then they try to give Anthony a deeper connection to the urban legend. While this is an aspect I appreciated, it just doesn’t make sense either.  Going along with loose story threads, there is the one involving Anthony’s girlfriend, Brianna Cartwright (Teyonah Parris) and her dead father. Brianna’s character seems to have a thing for helping artists. It seems like there could have been more going on in her and Anthony’s relationship, but this just isn’t explored and just should have been excised from the film completely.

Nia DaCosta has some talent behind the camera; plenty of shots through the film seemed to give a little wink to Spike Lee, and with the political content as well. But as a horror film, it just doesn’t work. The cast does a great job with the material they are given. Seeing Vanessa Williams reprise her role from the first film is definitely a high point of this film. But what put the nail in the coffin for me with this film is the final act.  It’s not just the message being heavy-handed; it just doesn’t make any sense, and I feel this is where audiences will be divided the most.

Candyman is presented in its original aspect ratio of 2.39:1. The ultra-high-definition image presentation is arrived at with an HEVC codec at an average of 55-60 mbps. A lot of stuff happens in shadows here, and I’d say the HDR bump here is going to be the big difference for the UHD. Blacks are a bit deeper, and shadow definition is considerably finer. Otherwise colors are a bid saturated, as was the filmmakers’ intent. The texture is nice here, and that is particularly true with some of the art. The added texture really brings some of these works to life. Any softness is also intentional, especially long shots of the neighborhood. Facial details stand out, and that’s a pretty important element to the film. Close-ups are spot-on.

The Atmos track defaults to a better than expected 7.1 mix. For a movie that really focuses on dialog, the surrounds are pretty aggressive here. There’s almost always something subtle going on in the mid and rear speakers. The sub is absolutely booming. This gives you more bottom than many action films. It starts right in the opening credits with plenty of sub booming from the speakers. That allows for a full sound that helps not just in music and jump scenes but adds fullness to everything from dialog to ambient sounds. Dialog always cuts through.

Deleted And Extended Scenes: (5:52). There are three with a handy play-all option.

Say My Name: (6:45) This is pretty much the making-of feature with the usual cast and crew insights. There’s plenty of behind-the-scenes footage.

Body Horror: (6:22) A good look at the makeup f/x ,and you get to see the process of turning the actor into the Candyman at the climax.

The Filmmaker’s Eye – Nia DaCosta: (4:48) The director gives her perspectives on the film.

Painting Chaos: (7:17) A nice look at the artists who contributed the paintings in the film. These were real Chicago artists who were commissioned to do various phases of Anthony’s work.

The Art Of Robert Aiki Aubrey: (4:54) A look at the film’s composer and his unique approach to the score.

Terror In The Shadows: (4:09) A look at the shadow puppet work that was used to tell the back story.

Candyman – The Impact Of Black Horror: (20:24) Fear The Living Dead and Candyman actor Colman Domingo hosts a panel on the subject with a focus, of course, on this film.

Though the film was completed before all the events of 2020, I feel the delay in release was also due to the fact that it could be perceived it pokes the bear when it comes to racial injustice. I’m a firm believer in the quote “Art is dangerous”, and cinema is definitely a platform to be used to evoke emotions and deliver a message … I still wonder how this film will be received by its target audience. At first glance, with this being a property I love, I thought I was the obvious demographic, but that’s not the case.  I feel this film will be a success financially, but I also fear there can be fallout.  While this may not be the powder keg of violence it would have been a year ago, I still believe there are some executives at Universal hoping that box office records are not the only headlines this film makes.

Brent Lorentson is a horror writer and film critic based out of Tampa, Florida. With a BA in Digital Film, he co-wrote and co-directed Scavenger Hunt. His short stories have appeared in various horror anthologies. In 2019 his short script Fertile Blood will be a part of the anthology horror film Slumber Party. He is currently working on his first novel A Dark and Secret Place set to be released in late 2019. Favorite Films: Taxi Driver, Fight Club, I Saw the Devil, The Wild Bunch, Dawn of the Dead, A Clockwork Orange, Pulp Fiction, Heathers, The Monster Squad, and High Fidelity.
Walker: Season One Scream (UHD Blu-ray) (4K)