Posted in: No Huddle by Brent Lorentson on December 17th, 2021 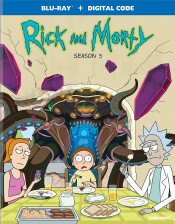 While I enjoyed the first couple seasons of Rick and Morty, I wasn’t all that sure about the show’s staying power with Adult Swim. I’d talk about the show with some friends, but for the most part this seems to be a show that finds its fan base more in their late teens. It’s fair to say it’s been more than a few years since I was a teenager, so perhaps it shouldn’t be much of a surprise that I was a little hesitant with this season (feel free to check out my review of Season 1). When Season 3 came out, the show blew up in a big way, gaining numerous fans, and even managed to make “Pickle Rick” a part of everyday pop culture and make Szechuan sauce at McDonalds a thing. The show, for those who may be unfamiliar, is something of a blend between Back to the Future and more than a sprinkle of Futurama. If that sounds like a fun ride, well, then this may be the animated series for you.

I was a little disappointed with Season 4, and I was a little hesitant in delving into Season 5, but I decided that I’d give this season a shot, and if it failed to impress, I’d just pass the next season on to another writer. Well, I’m glad I gave it a shot, because Season 5 was about as good as the show has ever been, and there are a few episodes that definitely are not only rewatchable, but ones I can see myself returning to again and again for the quick laughs and the fun story. What is also a little surprising is that this season seems to have a little more emotion, and by the end of the season, I was surprised by how much the show evolved with the characters and gave us some growth in their relationships. Basically, it became more than just a cartoon to entertain stoners, and I mean that in the best way.

The first two episodes of Season 5 just so happen to be my favorite episodes of the season, so things started off strong.  In the episode “Mort Diner Rick Andre”, Rick is forced to bring his nemesis, Mr. Nimbus, over for dinner, and as a way to make his guest happy, he creates a portal to store some wine and to age it so that is just how Mr. Nimbus likes it. As luck would have it, when Morty goes to retrieve the wine, it triggers a series of events where in the location the wine is being stored, time passes at an accelerated rate, and eventually Morty becomes the scorn of the dimensions race. It’s absurd, it’s crazy violent, and it’s hilarious pretty much from start to finish. How things manage to spiral out of control for Morty with each time he passes through the portal, for me this level of absurdity is what I love most about the show. In the next episode, “Mortyplicity”, the episode takes a more simple and direct story approach and toys with the idea of Rick creating decoy families in case anyone ever tries to attack them. This goes a step further with decoys making decoys, to the point there are so many that no one knows who the real family is. This one gets dark and has some fun horror elements, while obviously making a statement about cloning.

There are some fun episodes through the season that also pay obvious homage to some old-school cartoons Captain Planet and Voltron. It shows that the creators of the show definitely know their demographic and know we’ll appreciate these nods to our childhood. Then there are episodes that go a little extra over-the-top this season, like the Thanksgiving-themed episode that has Rick and Morty turned into turkeys, and then there are turkey’s that are given human DNA that try and take over the country. Keith David does voice work as the President, and Timothy Olyphant voices a soldier who is also turned into a turkey.Things definitely get weird in this episode. Then there is the episode “Rickdependence Spray” that definitely has you wondering if there is anything too outrageous for the show … I”ll just say it involves giant monster sperm trying to destroy the entire city … Oh, and then there is a giant incest baby that ends up being launched into space.

The last episodes of the season kind of take a more serious turn as we see Rick and Morty essentially break up as well as getting the return of Evil Morty from Season 1. Kind of the big payoff of these episodes is when we finally get some real back story to why Rick is the way he is.. From a storytelling standpoint, these are some really good episodes and of course are filled with the expected absurd moments, but what’s unexpected is just how heartfelt they are as well.

What’s kind of the most remarkable aspect of Season 5 is how much of it was done during the pandemic and how the crew had to work from home and zoom meetings.  We get a glimpse of this in the supplements that come with the disc that also have extras showing how they do the background designs  as well as other animation and compositing. One of my favorite bonus features is the B Story generator, where we see the show runners digging through a box of Post It notes with ideas scribbled on them to use in the show, ranging from funny to awful. If you are a fan of the show, this is definitely worth picking up so you get the episodes uncensored, but also this is definitely a solid season and has me looking forward to the next adventures with Rick and Morty.

Brent Lorentson is a horror writer and film critic based out of Tampa, Florida. With a BA in Digital Film, he co-wrote and co-directed Scavenger Hunt. His short stories have appeared in various horror anthologies. In 2019 his short script Fertile Blood will be a part of the anthology horror film Slumber Party. He is currently working on his first novel A Dark and Secret Place set to be released in late 2019. Favorite Films: Taxi Driver, Fight Club, I Saw the Devil, The Wild Bunch, Dawn of the Dead, A Clockwork Orange, Pulp Fiction, Heathers, The Monster Squad, and High Fidelity.
Holiday Gift Guide Spotlight: CBS Home Entertainment Television Eric Clapton – The Lady in the Balcony: The Lockdown Sessions (Blu-ray)