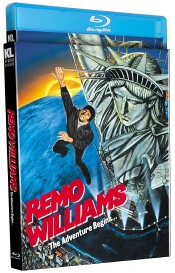 For me the promo art for Remo Williams: The Adventure Begins is without a doubt one of the most memorable VHS covers I can remember from my childhood. The hero dangling  by one hand from the tip of the Statue of Liberty has always stuck with me. As a kid, when finally getting to see this over-the-top action sequence, it left an impression on me to the point that when I made my first trip out to Liberty Island as a kid, all I could do was stare in wonder at how they could have pulled off such a crazy scene. As I’ve gotten older, my impression of the film has changed, but this sequence is still up there when it comes to favorite action sequences of all time. Now Kino Lorber has put out a remastered copy of a film that has fallen through the cracks, though I know it does have a cult following. What are my thoughts on this action spectacle, and is it worth revisiting?

When Remo Williams was birthed as a film, it was intended to be the blue-collar American version of James Bond. It was adapted from a series of pulp novels called “The Destroyer” by Warren Murphy and Richard Sapir. It was an adventure series just like Doc Savage, The Shadow, and The Spider, and producer Dick Clark felt that it would be a great franchise to launch in the States. Wanting to capture the James Bond tone, they hired a screenwriter experienced with the Bond franchise, Christopher Wood (Moonraker and The Spy Who Loved Me) and then director Guy Hamilton (Goldfinger and Live and Let Die) to helm the film. With this collaboration, it is no wonder that the producers and studio thought they had a guaranteed hit on their hands, but unfortunately it seems the movie gods had other plans for the film.

The story is about an NYPD cop who wakes up in a hospital with a new face. To the rest of the world he died after a mugging went wrong, and a secret organization has given him the new identity of Remo Williams (Fred Ward) to help them take down the government’s most powerful and dangerous people. The group seems to be made of only two other people, Harold Smith (Wilford Brimley) and Conn MacCleary (JA Preston). Smith has a supercomputer that gives him access to all the powerful information in the world and helps him pick targets that need to be exterminated. If this sounds familiar, I couldn’t help but feel the show Person of Interest took a lot of liberties with this story concept to develop their own show. Now before Remo can go into the field he needs training, and they set him up with Chiun (Joel Grey), a Korean martial arts master.  Honestly, the training portion of the film goes on a bit longer than needed, but it is there to really flesh out the relationship between Remo and Chiun. Because this film never got any subsequent sequels, these training scenes just seem like footage that could have been trimmed for pacing reasons.

It’s the final step of the training that takes place at the Statue of Liberty where the film picks up. This is a big moment in the film, and it definitely feels as epic as any big sequence in a James Bond film, but the problem is after this sequence there is nothing that tops it, and the film suffers for peaking too soon. Another is issue is the villain of the film. Sure, there are a bunch of henchman around for Remo to fight, but when it comes to the main bad guy, he’s nothing more than a government agent selling faulty weapons.  Sure, he’s a bad guy, but nothing like the ruthless villains in the Bond films wanting to take over or destroy the world.

While the film has the look of an epic adventure film and the script delivers with the story, the one problem I see is that the tone of the film is a bit all over the place. Sure, it has plenty of action, and some of the absurd moments have you thinking it could also be a comedy, but there just are not enough laughs to call it that either. For instance, when Remo is breaking into a military facility, he’s pursued by dogs that seem to be smart enough to climb ladders and cross tight wires from one building to the next. It’s a humorous scene, but when it results into a character being killed, it just becomes a jarring moment. Sadly that’s how the entire film is. While it’s fun, it doesn’t seem to ever hit its mark.

Remo Williams: The Adventure Begins is presented in the aspect ratio 1.85:1. The 1080p image is arrived at with an AVC MPEG-4 codec at an average of 34 mbps. Though the color at times seems a tad washed out, this is still a nice restoration and a reminder of why film always looks good.  The night shots capture so much detail and New York City just looks great in this film. The Statue of Liberty sequence is epic and beautiful when the shots go wide to showcase the city as the backdrop. The only minor complaint is because the image quality is so good, the makeup on Joel Grey is a little more obvious.

The DTS-HD Master Audio 2.0 track is standard and sufficient for this title. The dialog is clean and clear, and the action scenes sound decent enough.

Audio Commentary: With Producers Larry Spiegel and Judy Goldstein. While the commentary is informative, the lack of enthusiasm from the producers well may cause listeners to fall asleep. Still, there are plenty of fun behind-the-scenes stories on the track.

Created, the Destroyer: Writing Remo Williams: (17:09)This featurette is more about the history behind the pulp series of books that inspired the film.  I really enjoyed this one, and it shows how different the film is from the books.

Unarmed and Dangerous: Producing Remo Williams: (21:51) This gets into the production of the film from the casting to shooting some of the epic action sequences.

Secrets of Sinanju: Training for Remo Williams: (8:46) This is more about the actor Joel Grey and his transformation into the character of Chiun.

Balance of Power: Designing Remo Williams: (15:05)  Mostly this is about how they pulled off the big set pieces with most of the time on the Statue of Liberty sequence.

Assassin’s Tune: Composing Remo Williams: (13:46)  This is about how Craig Safan came up with the score of the film.

While the film isn’t perfect, it is still a lot of fun. With spy films and action films that take themselves too seriously for some audiences, this will be a breath of fresh air. The stunts and the set design are what stand out most for me in this film. No matter what people may think of this film, the Statue of Liberty sequence is worth checking out and will keep the viewer satisfied.

Brent Lorentson is a horror writer and film critic based out of Tampa, Florida. With a BA in Digital Film, he co-wrote and co-directed Scavenger Hunt. His short stories have appeared in various horror anthologies. In 2019 his short script Fertile Blood will be a part of the anthology horror film Slumber Party. He is currently working on his first novel A Dark and Secret Place set to be released in late 2019. Favorite Films: Taxi Driver, Fight Club, I Saw the Devil, The Wild Bunch, Dawn of the Dead, A Clockwork Orange, Pulp Fiction, Heathers, The Monster Squad, and High Fidelity.
Uncharted Village of the Giants (Blu-ray)