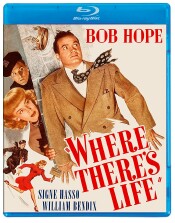 Few American entertainers have had a career to match that of Bob Hope. He lived 100 years and spent over 80 of those years in the entertainment industry. He appeared in over 70 films, wrote various books, and has over 300 appearance credits to his name on television and radio. He cut out a niche for himself during World War II that carried him through the Korean War and the war in Vietnam. He conducted literally hundreds of appearances for GI’s out in the field, performing sometimes for audiences at the front. He brought a ton of his celebrity friends and was Mr. USO for decades. An honest look at his career is impossible here. Thanks to the folks over at Kino, we have the opportunity to explore a couple of his films from the 1940’s. You can pick up each of them on Blu-ray now, and we’ll give you an idea of what you’re going to get for your money.

“This is Barovia. A small European country which even today has not fully recovered from the effects of a ruthless enemy occupation.”

The country of Barovia has just declared itself free from their enemy Mordia when an assassination attempt nearly kills the king. Fearing that the king will die without an heir and leave the country weak and eventually taken by their enemy, they need an heir to the throne. The king admits from his sickbed that he had a fling in America many years ago and that the tryst produced a son. General Katrina Grimovitch, played by Signe Hasso, will lead the effort to find the heir and bring him back, hopefully before the kingdom finds out just how badly the king was wounded.

Enter radio announcer Michael Valentine, played by Hope. He’s about to marry Hazel O’Brien (Marshe), and her many brothers and uncles, all cops, are afraid he might try to sneak out of the nuptials because they don’t like or trust him. It turns out he’s about to miss the wedding because he’s kidnapped by General Grimovitch, and he doesn’t believe her story of his royal lineage. There’s tons of typical slapstick for the day. Valentine ends up in and out of the custody of the Barovians, and he’s being cornered by Hazel’s police family, and there are attempts on his life by member of the government who is really working for the bad guys. He’s played by George Zucco, who is no stranger to bad-guy roles. His horror roles include a couple of the Mummy films, House Of Frankenstein, and a very creepy and sinister role in one of my favorite Murders At The Zoo. So he’s a great foil here even if he doesn’t really have a lot with Hope on screen. That would have been something really worth seeing.

Of course Bob Hope is really playing a character he’s played throughout his career. He’s a mostly cowardly cad who often finds himself in trouble. Of course, he also has his romantic lead in the attractive general who comes to bring him back. It’s a film that’s really a running gag of bits. Some of them are really good. There’s a particularly fun scene where the bad guys chase Hope into a clothing store, and they look at hats while Hope moves among the dummies used to display the hats. It’s a pretty well done skit that plays to Hope’s physical strengths.

The film is based on a story by Melville Shavelson, who also pitched in on the screenplay with Allen Boretz.

It’s during the reign of King Louis XV, and France is nearly at war with Spain. Spain proposes a royal wedding to unite the nations and prevent the war. Spain’s Princess Maria (Reynolds) will marry a nobleman from France. The King selects Duc le Chandre, played by Patrick Knowles. The King has an ulterior motive in that he sees Chandre as a rival for another woman, Madam Pompadour, played by Hillary Brooke.

Enter Bob Hope as Beaucaire. He’s the royal barber who ends up getting the King in trouble with his wife when he plays dress-up in the King’s robes and gets caught by the Queen. Beaucaire is in love with a lowly maid, Mimi, played by Joan Caulfield. But the prank gets her banished from France, and Beaucaire also ends up being sent to Spain for his own misdeeds. He hitches a ride with his friend Chandre and ends up masquerading as the nobleman on the trip after Chandre falls in love with a woman they meet on the road. We all know it’s Maria, and so he’s actually with the girl he’s being forced to marry but just doesn’t know it. We’re in on the gag, of course.

Of course, there has to be a bad guy. In this instance it’s Spain’s Don Francisco, who wants the war to happen and decides to stop the wedding to make it happen. When he discovers the identity switch, he tries to use it to his advantage until King Louis and his Queen decide to unexpectantly make the trip for the wedding, and they know both of these guys.

Hope makes great use of this being a period piece. The prank in the robes was actually pretty original at the time, and there is an extended series of gags based on the practice of wig powdering that goes a little long but is quite entertaining anyway. There’s plenty of swordplay, and they take full advantage of the fact that the guy Beaucaire is pretending to be is a noted swordsman. He ends up in a sword fight with Don Francisco that literally tears up the orchestra. Not that I condone the destruction of musical instruments, mind you.

This is a pretty solid cast. Patrick Knowles is known to horror fans as Lon Chaney, Jr.’s romantic rival in The Wolf Man. He also played a scientist in Frankenstein Meets The Wolf Man. It’s interesting how many horror stars Hope had in his slapstick films. Cecil Kellaway is a beloved actor to horror fans for his mild-mannered but eccentric Professor Elsin in Ray Harryhausen’s The Beast From 20,000 Fathoms. He plays a rather kindly role here as a man unwittingly involved in the identity swap. Reginald Owen actually played King Louis XV in 1934’s Madam Du Barry. So this was his second time in the role.

This is a remake of the more serious 1924 film starring Rudolph Valentino and based on a rather old 1900 novel by Booth Tarkington.

Both of these films provide pretty much typical Bob Hope and are nice additions to the Hope and Kino libraries. There’s some musical numbers in the second film along with the laughs. “How do you say scream in B?”

Gino Sassani is a member of the Southeastern Film Critic's Association (SEFCA). He is a film and television critic based in Tampa, Florida. He's also the Senior Editor here at Upcomingdiscs. Gino started reviewing films in the early 1990's as a segment of his local television show Focus. He's an award-winning recording artist for Omega Records. Gino is currently working on his 8th album Merchants & Mercenaries. Gino took over Upcomingdiscs Dec 1, 2008. He works out of a home theater he calls The Reel World. Favorite films: The Godfather, The Godfather Part II, The Body Snatcher (Val Lewton film with Karloff and Lugosi, not the pod people film), Unforgiven, Gladiator, The Lion King, Jaws, Son Of Frankenstein, The Good, The Bad And The Ugly, and Monsters, Inc.
The Lost City (2022) Rick and Morty: The Complete Seasons 1-5 (Blu-ray)