Posted in: Disc Reviews by Gino Sassani on October 26th, 2022 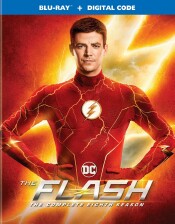 “Look at them praying for a miracle that isn’t coming. Who knows? Maybe it’s my curse to leave one betrayal behind only to find a greater one here amongst the stars. They could have stopped this, but none of them had the strength to do what must be done. But I do.”

Crossovers have been big events in the CW Arrowverse shows. They would involve characters from all or most of the current shows, and the episodes would play across the shows themselves. The events were always huge so that they required the combined force of the many DC heroes. Times have changed, and now The Flash is pretty much the only Arrowverse show left on the air. That creates a bit of a logistic problem for the whole crossover event idea. Or does it? This season there is a crossover, of sorts. It plays out over five episodes and includes characters from some other Arrowverse shows even though they are no longer on the air. The Flash begins its eighth season with a crossover event called Armageddon. It encompasses the first five episodes of the season and features characters from the other shows.

Ray Palmer (Routh) is in town for a science conference and to accept an award from Iris’s news outlet. Chester (McKnight) is super excited to meet his idol and maybe get him to fund some of his and others’ ideas. But it turns out that Barry is going to be glad to have him around when a new big bad appears on the scene. He’s Despero, played in part by Tony Curran. I say in part because when he’s not taking a normal human guise he’s a computer-generated villain, still voiced by Curran. Despero is an alien from the future who has witnessed the destruction of the Earth by Barry Allen as The Flash. His plan is to stop the catastrophe from happening. Despero explains that Barry will soon face a series of unfortunate events that will drive him insane, and that’s how he will become this destructive force. Despero offers to hold off on stopping Barry until he senses that his mind is tipping into that crazy. Of course, no one on Team Flash really believes it could happen until those events start to pile up, and they do so in … well … a flash.

“Congratulations! You’ve just given me flashbacks.”

Barry is accused of being corrupt and suspended from the CCPD. The government detects a possible disaster at STAR Labs and takes over his facility. Things like that start to make it look like Despero might be correct. And it’s not just Barry. He has help along the way that includes Supergirl’s Alex Danvers (Leigh). Meanwhile there’s a new Royal Flush gang in town, and their new Queen has psychic powers that just might be the reason that Barry and others are cracking up a bit. Barry is worried enough that he seeks out Black Lightning, reprised by Cress Williams. Barry wants to invoke “Injustice”, which is a protocol that takes away the powers of a Justice League member gone rogue. It’s really something found in the comics in one of The Justice League Of America’s more compelling story arcs. In the books it’s Bruce Wayne/Batman who secretly develops a file on each hero complete with a plan to take them down if something goes wrong with them. In the books the rest of the heroes get pretty pissed when the project comes to light. Here it’s something they all devised, and Black Lightning is the one literally charged with stopping Barry. It doesn’t really work except to drain most of his speed. He ends up in the future where he learns all of his team, including Iris, hate him, and there he’s the Reverse Flash, while Eobard Thawne played by the wonderful Tom Cavanaugh, is about to marry Iris. It’s here that he learns he’s been framed and who is really out to get him. Batwoman (Leslie) also joins up in this episode.

In the final showdown Mia Queen, played by Katherine McNamara, joins the fight, and Barry finds an ally in a most unexpected Damien Dark, played by Neal McDonough. Of course they manage to prove the frame-up, stop the real villain, and convince Despero that everything is now OK.

When we get into the normal season things settle into those elements that make up the mainstay of the series. Caitlin and Frost are now two separate people. It’s a wonderful chance for Danielle Panabaker to play both roles, and they provide a lot of the wonderful drama this season. They face a serious loss this season, and it pushes Caitlin over the edge as she becomes obsessed with raising the dead. The only bad part of this thread is that she kind of removes herself from the group, and so she ends up missing most of the season’s real action.

Iris (Patton) has an uneven season. She turns over some of her editor’s work to Allegra (Compton), who has a little trouble getting the others to trust her until she ends up having to reveal her powers and saves the office crew. She also gets into a relationship with Chester.

The season focuses on a new “force”. We already have the Speedforce and Negative Speedforce. Now Iris suffers a time sickness where she slips in and out of time and is eventually trapped in that Dark Force.

There is a nice switch from the usual meta-of-the-week the team has to stop. This season finds the team trying to help metas out of jams. Barry wants to help a flame meta who has been framed, and Barry is pretty much the only one who believes him, because he reminds Barry of his own father. Some faces from the past return, but they’re not the same, and the early version of Eobard Thawne, played by Matt Letscher, ends up being a guy they also want to help. We get a few visits from the future kids, and they even get a rather humorous episode of their own. But the real new big bad is a meta with cold black flame that threatens to destroy the world. He ends up leveling up to become Death Star. This character was originally a villain formed by the merger of a Lantern Ring and Firestorm. No ring here, but it’s close to the comics, and he’s the big climax big bad that has to be taken out.

A little bit about the Lantern Ring. There are some clues dropped here that involve a visit from David Ramsey as John Diggle. I have to say I love that he’s kind of become the DC version of Nick Fury. He shows up on all of the shows, and this time he has a box with a huge green glow power inside that tempts the jailed Thawne. We never see what is in the box, and Diggle talks about how it came to him. I think Diggle is being positioned to become Green Lantern. Now, that’s just speculation on my part, and there’s nothing official to that happening. Just remember you heard it here first.

One of the biggest losses on the show is that Jesse L. Martin isn’t in enough episodes. That’s been true for a couple of seasons, and he’s not returning as a regular for the ninth and final season. That’s a shame. I love Martin and consider him to be the best actor in this series. He’s really the emotional heart of the story, and he brings that so much in the few episodes he gets here. I suspect he’ll be in a few episodes next year in spite of his “leaving”. The Flash would never be the same without him.

The series has such a large cast at this point that you just can’t do justice to them all. While I like them all and can’t point out a weak link here, it’s becoming too much and has affected the storytelling somewhat. It will be very interesting to see how they say goodbye next year.

The Flash – Standing The Test Of Time: (8:40) A Look at the elements of time travel in the series and not just this season.

The DC Heroes – Path To Glory: (17:22) It’s a look at the dynamics behind the various DC heroes with clips from all of the CW/DC shows.

I’m certainly disappointed because the show is winding down. I do realize that it’s time. The Arrowverse has pretty much run its course, and the new leadership at Warner and the CW will want to do their own thing going forward. I feel justified in calling this the best of the CW shows now that it’s lasted longer than any of the others. I have one more year to savor first. I got to watch and review eight seasons of the show so far. “Now that was fun.”

Gino Sassani is a member of the Southeastern Film Critic's Association (SEFCA). He is a film and television critic based in Tampa, Florida. He's also the Senior Editor here at Upcomingdiscs. Gino started reviewing films in the early 1990's as a segment of his local television show Focus. He's an award-winning recording artist for Omega Records. Gino is currently working on his 8th album Merchants & Mercenaries. Gino took over Upcomingdiscs Dec 1, 2008. He works out of a home theater he calls The Reel World. Favorite films: The Godfather, The Godfather Part II, The Body Snatcher (Val Lewton film with Karloff and Lugosi, not the pod people film), Unforgiven, Gladiator, The Lion King, Jaws, Son Of Frankenstein, The Good, The Bad And The Ugly, and Monsters, Inc.
Ed Sullivan’s Rock ‘n’ Roll Classics Halloween Spotlight: The Twilight Zone: The Complete Series (2021)