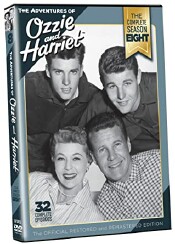 We’ve had Keeping Up With The Kardashians, Gene Simmons with his Family Jewels, and even Snoop Dog’s Father Hood. It’s become a bit of a trend to follow these celebrity families around and watch the drama of their privileged lives unfold on our television screens. You might think it’s a relatively recent phenomenon, but would you believe they were doing it back in the infant days of television when we followed around a musician named Ozzie and his wife way back in 1952? No, we’re not talking about Ozzie Osbourne and his family. I’m talking about Ozzie and Harriet Nelson. They were television’s darling family before we ever heard about Lucy and Desi. The show actually started on radio like many of the fledgling industry’s early hits including the likes of Gunsmoke. Four years after the radio brought us The Adventures Of Ozzie And Harriet, they moved to television. While their two sons were played by actors on the radio, both David and Ricky Nelson joined the television show, and it went on to make television history, breaking records, some still held today. It was the first television series to ever hit 10 seasons. It lasted from 1952 to 1966 with 436 episodes. Until The Simpsons, it was the longest running scripted television comedy and remains still the longest live-action scripted comedy ever on television. And while the stories were, of course, fictional, most aspects of the show were quite real. Their television home was modeled after their real home. Many of the family’s life stories found their way to the series. The four family members were quite real, and you just couldn’t fake these relationships.

As time went on, the series would change. In the 60’s, now-teenaged Ricky would go from the little brother to the star of the show and become television’s first teen idol. Long before David Cassidy or Davey Jones, there was Ricky Nelson. The show started to take advantage of his status and began to work his performances of his own music into the episodes. Ricky would have a pretty solid career. He was in the middle of a 1980’s comeback after a hit with Garden Party when his airplane crashed and killed him and his wife, who would also be a part of the show as Ricky’s wife toward the end of the series. The series found a new life in syndication in the 1970’s, which is where I first encountered the series. The syndication packages often ignored the early shows before Ricky took off for stardom, so I only got to see those episodes, and that was many years ago.

Ozzie and Harriet’s grandson and Ricky’s son Sam Nelson went on a 7-year journey to hunt down the original elements to all 436 episodes and begin to restore them. He found them often in horrible climate conditions and in great need of restoration, and so he took on that task as well. I had a chance to talk to Sam about that process, and you can listen to that conversation Here. That process is about 50% complete, and through MPI they are now being released. The first six seasons of episodes are already out, and now seasons 7-8 are available on DVD, and it’s a big part of television history that you can now add to your home video shelves.

In the 7th and 8th seasons Ricky is now in college with brother David and at the same fraternity. With frat parties and college dances, there are even more opportunities for Ricky to break out the guitar with the boys and play a song or two, usually at the end of an episode. These seasons do have a significant change. It’s obvious that brother David had been a little left out with his brother’s teen idol status, which certainly influenced the show. There was a concerted effort starting in Season 7 to give David more to do. He’s given several pretty big storylines that even appeared to break the show’s bank. He gets a job as a lawyer’s assistant ,and that opens up a lot of David stories. As for breaking the bank, the 8th season starts with a couple of David episodes that certainly cost far more than the average budget per episode. The first episode of that season is called Sea Captain, and it brings an old friend of Ozzie’s who has spent his life on the sea. When David is enticed by his offer to join him, it leads to a series of dreams among family members of David getting caught up in some espionage in a middle-eastern land. The show quite accurately looks the part of an old espionage film with new sets and even stunts. The show’s most expensive episode in 14 years appeared in this season, and it’s called The Circus. David and Ricky actually train to be flying trapeze artists. It is teased at the end of the previous episode. The show also veered into the land of fantasy a few times, most notably when Ozzie has trouble planning a costume-themed event. Harriet dresses as a fairy godmother and uses her magic wand to provide the guests who couldn’t find costumes with costumes.

Unlike most of these 1950’s television shows, Ozzie doesn’t appear to have a job. He’s always home, and there’s never even a mention of what he might do for a living. We know he does something, because many episodes started with the family having breakfast, and Ozzie would be in a coat and tie. Of course, he was almost always in a coat and tie. He had relationships with local affiliations like the Chamber of Commerce, but we can only guess about his profession, since it is never mentioned in the series. In these sets you’ll find him representing his town all the way to Washington DC for a park project, and apparently he even brings an Air Force base to the town. Harriet was the typical 1950’s housewife.

The show was in black & white until the very last season in 1965/66 when it had its final season in color. The episodes certainly show their age with plenty of issues from time to time, from shifting light to scratches to some kind of overlapping dirt. But when you consider the age of these early seasons, I think they did a tremendous job of restoration here. There have been more famous and recent shows that were not restored this well. It helps that unlike many comedies, particularly later in the 70’s and 80’s, this wasn’t shot on videotape. This was 35mm film and native 4K. You’re not going to get that kind of resolution here, but I think you’ll find they did a pretty good job in restoring the material. Starting with the second season, episodes were culled not from their original broadcast copies but from later repeats that included Ozzie or Harriet explaining the episode was from years ago, and these were followed by a Ricky Nelson song. It’s obvious we lost a small piece of the original episode, but I assume this was done to give us the best possible copy.

The show often broke the fourth wall more than ever in the 8th season, and the actors spoke directly to the camera. It’s likely most of the “rules” for television hadn’t even been established yet, and the industry as a whole was learning. Ozzie was the main guy here. He wrote and directed and produced most of these episodes as well as writing and directing the show’s music. He was Desi a few years before there was a Desi. I watched all 68 episodes in these two sets before writing this. It was a big investment of time and energy. I suspect you might find watching shows like this a some simple old-fashioned fun thing to do. “This is situational comedy.”

Gino Sassani is a member of the Southeastern Film Critic's Association (SEFCA). He is a film and television critic based in Tampa, Florida. He's also the Senior Editor here at Upcomingdiscs. Gino started reviewing films in the early 1990's as a segment of his local television show Focus. He's an award-winning recording artist for Omega Records. Gino is currently working on his 8th album Merchants & Mercenaries. Gino took over Upcomingdiscs Dec 1, 2008. He works out of a home theater he calls The Reel World. Favorite films: The Godfather, The Godfather Part II, The Body Snatcher (Val Lewton film with Karloff and Lugosi, not the pod people film), Unforgiven, Gladiator, The Lion King, Jaws, Son Of Frankenstein, The Good, The Bad And The Ugly, and Monsters, Inc.
Peking Express (Blu-ray) Exclusive Interview With Bruce McAllister: Author Of Stealing God And Other Stories