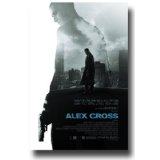 Whenever the TV spots for Alex Cross promise that the movie features “Tyler Perry as you’ve never seen him before,” I can’t help but snarkily add “…in men’s clothing!” To put it lightly, I had my doubts when I heard the wildly successful actor/producer/director/playwright/crossdresser would be stepping into the title role, previously played on screen by Oscar winner Morgan Freeman. (Especially when Perry replaced the great Idris Elba on this project, though my giant man-crush on Elba possibly clouded my judgment.)

Following Freeman’s portrayal of Alex Cross, the idea was to reboot the character with a younger actor in hopes of kickstarting a new action franchise. Perry stars as Cross, author James Patterson’s brilliant detective/psychologist. Cross and Detroit Police Department colleagues Tommy (Edward Burns) and Monica (Rachel Nichols) square off against a murderous psychopath known as Picasso (Matthew Fox), who specializes in pain and torture.

When Cross and his team foil one of Picasso’s assassination attempts, the killer decides to press the pause button on his assignment and instead target his pursuers and their loved ones. That’s bad news for Cross’s pregnant wife Maria (Carmen Ejogo) as well as Tommy and Monica, who are romantically involved with each other.

Every character besides Cross is completely one-dimensional. More importantly, the movie commits the storytelling sin of telling rather than showing. For example, we are repeatedly told that Cross is a brilliant detective/psychologist, but the movie does a poor job of showing us the process that allows him to analyze clues or get inside a killer’s mind. (There’s an absurd moment toward the end where Cross solves a puzzle by simply hearing a train in the distance.) We’re told that Alex and Tommy are best friends, but the lack of chemistry between Perry and Burns shows us otherwise.

With Cohen at the helm, you figure the movie would at least have some decent action sequences. Unfortunately, that’s not really the case. Other than staging a cool car wreck, the action ranges from “nothing to write home about” to incomprehensible. The climactic fight between Cross and Picasso is edited to within an inch of its life (perhaps to cover for Perry’s lack of bona fides as an action star).

Perry is actually pretty believable as a jovial family man, a little less believable as a brilliant detective/psychologist and totally unbelievable as a revenge-seeking “man on fire” in the film’s final act. Maybe it’s just me, but I couldn’t buy Perry as a tough guy no matter how much he lowered his vocal register.

Fox, on the other hand, is easily the best thing in Alex Cross even though his character is pretty much a paint-by-numbers movie psycho. The actor is leaner, (definitely) meaner and convincingly leaves behind the heroic image he spent six seasons cultivating on Lost. (Although he remembered to bring Dr. Jack Shephard’s off-putting intensity.) The rest of the cast doesn’t have much to do — especially Giancarlo Esposito in a too-brief appearance as a flashy criminal — though I was a bit taken aback by Jean Reno’s bloated appearance.

The movie’s astoundingly dumb tagline (“Don’t ever cross Alex Cross”) seemed like a joke and did little to assuage my initial fears. Maybe it was my low expectations — so low, they were subterranean — but I sort of enjoyed Alex Cross for what it was: a dumb, ridiculous thriller that will play reasonably well on FX (or most likely TBS) in about three or four years. Perry is still no Alex Cross, but he’s the least of this movie’s problems and I’m kind of glad Elba didn’t waste his time with this turkey.